Review: WOLF CREEK 2, Nasty As Ever 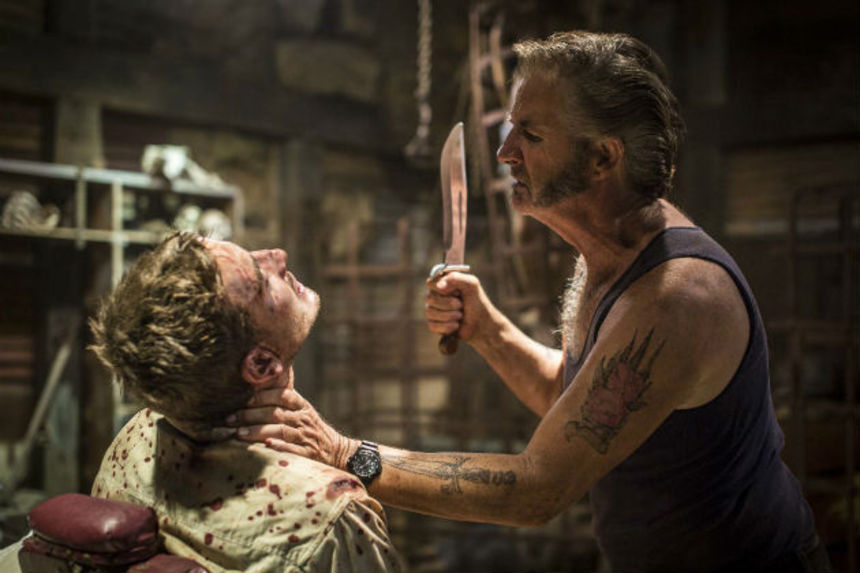 The wide-open, spectacular beauty of the Australian Outback beckons to travelers from around the world, which makes it the perfect setting for a movie about a serial killer.

Mick Taylor (John Jarratt) roams the outback, searching for unwary tourists he can lure and/or drag back to his isolated lair, far from prying eyes, where he can torture them at his leisure before silencing their anguished cries forever. His modus operandi was established in Wolf Creek (2005), which concluded with him still on the loose. Wolf Creek 2 continues his story, fleshing out the character a tiny bit more, and further documenting his monstrous activity.

While the first film slow built up its tension, the sequel explodes into action from its opening sequence. After that, the appearance of a fun-loving, flirtatious couple might as well be accompanied by blinking neon signs that identify them as "sacrificial lambs." It's a measure of director Greg McLean's filmmaking talent, however, that the hitchhikers are not simply cardboard cut-outs, ready to be devoured by the human shark that is Mick Taylor.

Hailing from Germany, Rutger (Philippe Klaus) and Katarina (Shannon Ashley) are likable stand-ins for the audience. They are experienced backpackers, conscious of their surroundings, and not inclined toward foolish actions that put their lives needlessly at risk. They are suitably cautious when first approached by the nefarious Mr. Taylor, which makes their fate that much more capricious and unnerving. From there, the story jukes in a nicely unsettling manner, somewhat related to the first film, but not entirely tied to horror-movie conventions, as a third traveler, Paul (Ryan Corr), finds himself lassoed to Taylor's sadistic urges. 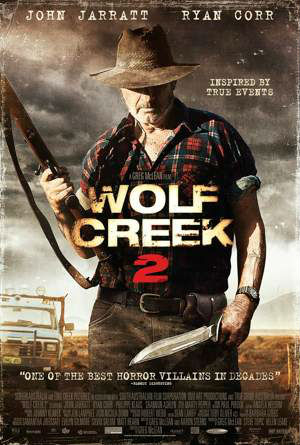 McLean and his collaborators are highly-skilled, which means that the explicit violence hit me right in my queasy stomach, leaving a bitter aftertaste. As much as I'm inclined to distance myself emotionally from fictional torture inflicted upon fictional characters, the film's real-life inspiration is undeniable. Even if events did not happen as depicted in Wolf Creek 2, similar atrocities have been committed under similar circumstances, which means that I took everything that happens in the movie seriously.

Now, it's entirely possible for other viewers to take Mick Taylor at face value. As played by Jarratt, he's a larger-than-life character, a legendary figure of barbarism, leaping out of the nightmares of anyone who's passed through open country and wondered what might be lurking out there in the shadows. During one long -- very long -- sequence in which he tortures one of his victims, he's alternately wicked and boisterous in the fashion of a barroom drunk, the type of personality that is extremely volatile and ready to explode at any moment.

That sense of danger ripples throughout Wolf Creek 2, in waves that don't ebb until the end credits roll. As mythic as Mick Taylor appears to be, he exerts a disturbing energy that feels entirely, authentically, evil.

The film is now available to watch via various Video On Demand platforms. It opens in select theaters in the U.S. on Friday, May 16.