Texas Frightmare Weekend 2014 Is Bigger Than Ever, And ScreenAnarchy Has A Pair Of Passes For A Lucky Reader! 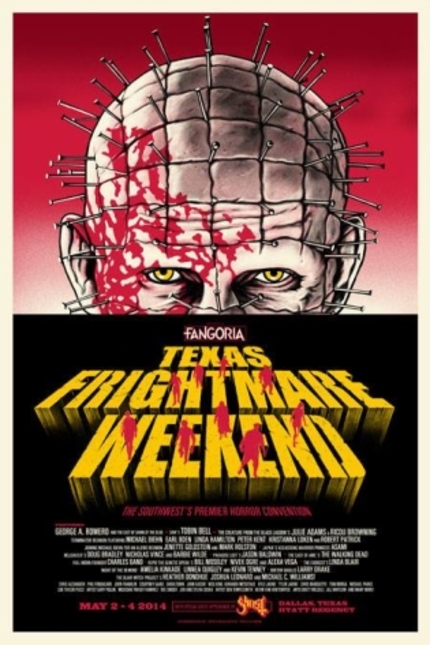 When There's No More Room In Hell...

...The Dead Will Walk The Floors Of The Hyatt Regency DFW Convention Center

Dallas's annual celebration of all thing ghoulish and gory has returned! Texas Frightmare Weekend has come a long way from its origin in a suburban convention center and is now probably the largest genre film convention in the Southwest as it continues to outgrow venues year after year. The 2014 event will take place at the Hyatt Regency DFW in Irving, Texas and is expected to be the most insane yet!

This year's event has brought on a couple of high profile sponsors in the form of legendary horror mag, Fangoria, and our favorite cinema chain, the Alamo Drafthouse Cinema. Both sponsors are doing it up right, with a cool Fangoria booth and numerous horror themed screenings at the new Alamo DFW in Richardson. In addition to the screenings at the Alamo leading up the event (The Creature From the Black Lagoon 3D, Terminator & Terminator 2, Saw, Repo! The Genetic Opera) and culminating in a cast a crew reunion at a screening of George A. Romero's legendary Dawn of the Dead with Romero, David Emge, Scott Reiniger, and Tom Savini in attendance. That's all before the event even starts!

Once TFW opens its doors on Friday May 2nd, we'll get a slew of exclusive screening at the event including the world premiere of Circus of the Dead, the North American Premiere of Gun Woman, Repo! The Genetic Opera with shadow cast, Pick Axe Murders 3: The Final Chapter, the world premiere of SX_Tape from the director of Candyman, the North American premiere of Zombie TV featuring segments by Nishimura Yoshihiro, Makuno Maelie, and  Tashiro Naoya, Alex de la Iglesia's Witching & Bitching, and many more. There is always something to do!

Those of us lucky enough to attend May 2, 3, & 4th will be greeted by an insane line up of guests including:

As if that wasn't enough, there is the massive pile of vendors selling everything from DVDs and t shirts, to rare original one-sheets, toys, and crafts of all shapes and sizes. Whether you can afford to spend $10 or $1,000, there's a good chance you're coming home with something cool.

Twitch has teamed up with Texas Frightmare Weekend to offer up a pair of weekend passes for whomever can give us the best answer to the following prompt in the comment section below:

Over the course of six films, George Romero has created a world filled not only with amazing human characters, but also, an unbelievable number of memorable zombies. Now it's your turn to tell us which member of Romero's undead is your favorite, and why. The most creative, honest, or just plain insightful answer scores two guest badges to Dallas' upcoming Texas Frightmare Weekend, good for entry on from May 2 - 4.