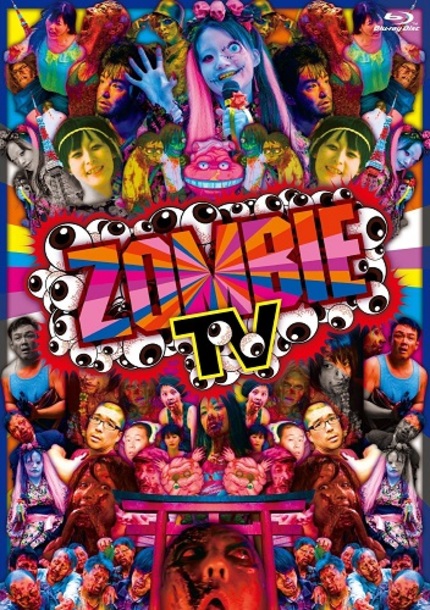 The latest project from Japanese splatter master Nishimura Yoshihiro and friends is a bit of a departure from his usual oeuvre. For this 77 minute blast of madness, Nishimura is joined by a pair of relative newcomers in Makuno Maelie and Tashiro Naoya to create an epileptic fit of all things undead. Zombie TV is not a single narrative, it's a series of roughly two dozen vignettes all crammed into its more than manageable runtime. As one might expect, the film's different sections vary in style and quality, but the good news is that it's very difficult to have the time to get bored, and the content tries really hard to keep the brain from settling into a groove.

The Japanese depiction of zombies over the last decade has been overwhelmingly sold to Western audiences through films from directors like Nishimura and his former Sushi Typhoon cohorts, Uguchi Noboru, Yamaguchi Yudai, and Sakaguchi Tak. Zombie TV takes that wacky image and plays with it while imagining a world in which zombies are a part of everyday life. The result is uneven, but the blasts of weirdness are short enough to at least feel as though you are actually changing the channel while watching TV in this world.

Stories begin, play through, and end at varying points in the film, flipping back and forth between them provides the viewer with a respite from one kind of weirdness by punching them in the face with another. As a longtime Sushi Typhoon and Nishimura fan, I kind of knew what I was getting into. I've seen and reviewed a huge chunk of these films on this very site. However, it was nice to get a somewhat softer version of the balls out gore and extravagant, indulgent, dare I say overlong experience I'm used to with Nishimura, a filmmaker who is notoriously fond of his material once he gets to the editing room.

Zombie TV's strengths and weaknesses are surprisingly similar. The filmmakers do not try to weave a single coherent narrative, instead choosing to stay within a world they've built and expand thematically in different directions. Instead of a serious look at what a world would look like with zombies and humans side by side (and honestly, who would expect that from this crew?), the film takes more of an Us Weekly approach to the material, "Zombies, They're Just Like Us!" Zombie exercise videos, zombie sex manuals, zombie romance, and even zombie death cults (?) feature prominently into the film, with varying degrees of success.

Look. If you know this crew, you pretty much know what you're in for. The film leans more toward Iguchi's zany antics than Nishimura's usual epic meandering, in spite of the fact that Iguchi is nowhere to be seen. If you're in the mood for a zombie sex manual, zombie boob grabbing, zombie musical numbers, and lots and lots of cheap looking gore, practical effects, and weirdness you're probably in the right place. Zombie TV is not destined to be another milestone in Nishimura's career, but his co-directors might have a future as long as Japanese splatter still has an audience, which may have stopped boiling over, but certainly continues to simmer.