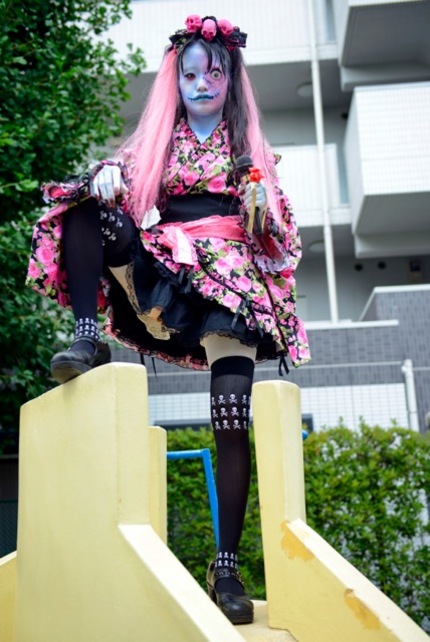 Japanese splatter master Nishimura Yoshihiro is back and ready to douse your screen with yet another stream of high pressure blood with new omnibus horror anthology Zombie TV.

A Monty Python-esque collection of shorts, animation, sketch comedy, instructional videos and more, ZOMBIE TV showcases the natural evolution of zombies in the 21st century, no longer a frightening menace, but rather an annoying neighbor you realize you simply have to put up with. ZOMBIE TV answers such natural questions as: in a world full of the undead, wouldn't some of the surviving humans want to join the majority and become zombies themselves? Would becoming a zombie solve the emotional and relationship problems we all have as living, breathing human beings? Do zombies have their own idols? Would zombies worship a zombie god? Who would win in a fight: a cannibal, or a zombie? How did zombies evolve from walkers into runners? And the most burning question of all: how do zombies have sex?

Nishimura has created ZOMBIE TV with the assistance of a new pair of filmmakers he's excited to introduce to the world: award-winning splatter short film director Naoya Tashiro, and artist / animator Maelie Makuno. Bringing very different tastes and styles to their episodes, the trio have created a fun, fast-moving film that captures the feeling of flipping through late-night TV in a world gone mad. Structured to entertain without tiring out its audience, ZOMBIE TV provides food for thought--if that food were human guts and brains. Sure to delight zombie fans old and new, ZOMBIE TV offers a new- found appreciation for our walking dead friends.

Premiering at Monsterfest in Australia today, we've got the first trailer for Zombie TV to share below.