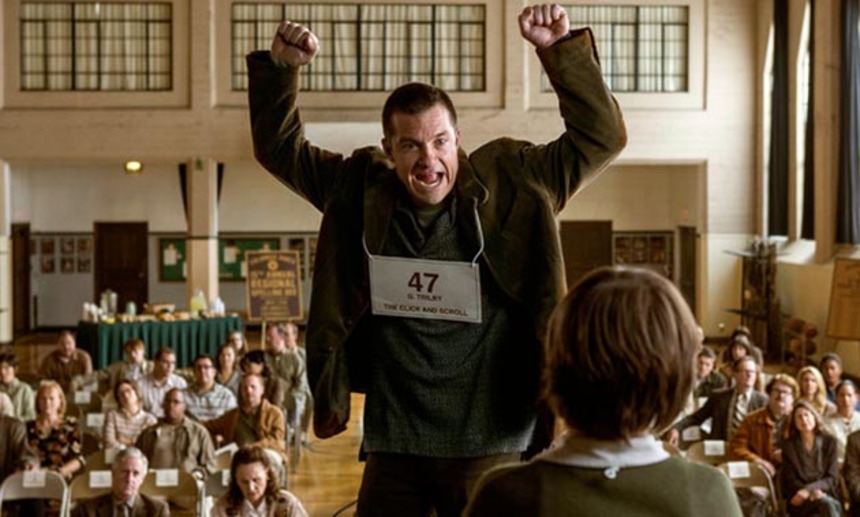 The career of Jason Batemen is rather fascinating. Rising from a sidekick on Silver Spoons early in his career, he stumbled through a number of films that his sister's sit-com sibling would pass on (including the truly egregious Teen Wolf Too). He showed up as a minor character in a few projects here and there but never really broke through until his starring role in Arrested Development showed a new generation of viewers the comedic skills of the actor.

Of late, he's made a number of stinkers (ie., Identity Thief) but also lent his hand to some excellent projects like Tropic Thunder or Up In The Air. With Bad Words, we see Bateman taking the center stage, both as leading man and his debut as director. Yes, this is a high concept comedy, and one that overstays its welcome slightly. But it's also extremely funny and, at times, both filthy and poignant. Overall it strikes a balance that's quite commendable.

Think Akeelah And The Bee meets Bad Santa and you get a pretty good idea about the story of Bad Words. I'm not a huge fan of Bad Santa because of the ways the film doesn't go quite far enough. To Bateman's credit, he's unafraid to skewer his nice-guy image in this film - when it's dark and insulting, it goes dark. Children are shamed to the point of tears, language is used to cut people apart left and right, and all are in the attempt to embarrass and cause destruction. This is misanthropic humour done right. And Bateman is more than up to the task of appearing utterly douchey.

Kathryn Hahn is quite hilarious as the reporter doing just about anything to get a scoop and Alison Janey and Philip Baker Hall provide a bit of heft in their small roles. However, it's the performance by young Rohan Chand's that's going to get much of the attention. Too often the kids in these types of films are way more precocious than believable. But Chand does an excellent job (no doubt due in part to comfort with his costar/director) at being both a sharp tongued raconteur and just a kid.

When the humor goes black, it does so in a pretty inspired way. This makes for the eventual resolution to feel both earned and even more cathartic. The competition framing is, of course, a bit predictable in terms of outcome, but the script toys enough with our expectations to keep it interesting.

More importantly, the film never feels maudlin or safe and always makes you feel like things can get even bleaker. It's likely to be unsettling to a regular audience to uncomfortably plunge into such a darkly sarcastic film, but for those amenable to this smart and at time sophisticated film, there will be plenty about Bad Words to admire.
This review originally ran as part of ScreenAnarchy's coverage of TIFF 2013. Bad Words opens in limited release March 14, 2014.