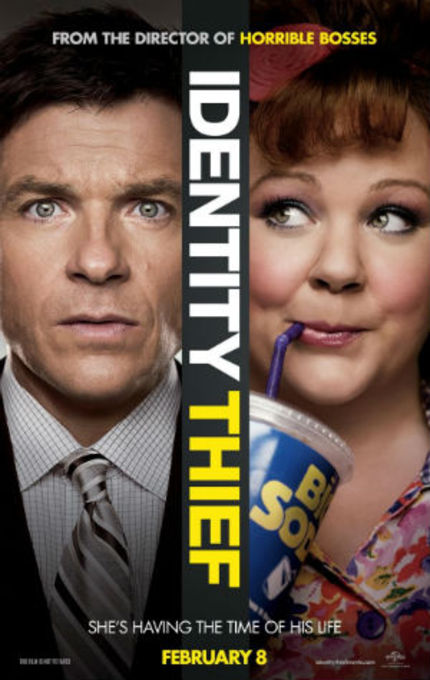 You have to admit, it takes some guts to rip off a hundred other movies and then call the result Identity Thief. That sort of brazenness would be admired by the scoundrel at the center of this wearying, derivative comedy, if she were capable of higher thought, which she isn't, because she is merely a machine of destruction.

What a waste this is! Jason Bateman, an immensely likable actor with impeccable comic timing and apparently the worst agent in Hollywood, plays Sandy Patterson, a meek Denver family man whose identity is stolen by a Florida woman called Diana. She's played by Melissa McCarthy, another affable and talented comedian, but one who is unfortunately at the point in her stardom where she's probably going to make three or four really awful comedies in the span of 18 months before getting her sea legs. (See also: Zach Galifianakis, 2010-11.)

By the way, Sandy gets his identity stolen by falling for a scam over the phone and giving out his personal information. The reason this is noteworthy is that Sandy works in the financial industry, as the accounts processor for a large investment firm. He does that for a living. And he fell for a phishing scheme.

His credit cards maxed out, his reputation ruined, and his career in jeopardy -- not because he fell for a phishing scheme but because Fake Sandy has put him in trouble with the law -- Sandy has no choice (NO CHOICE!) but to go to Florida himself, find the impostor, and drag her to Denver to clear things up. The cops, represented by Morris Chestnut, are sympathetic but useless except in terms of stating the film's premise in easily quoted nuggets: "She'd have to be standing right here to do you any good." And since the movie has already given up on mundane concepts like "plausibility" and "common sense," Sandy and Diana will have to travel by rental car rather than plane, train, or bus. Road trip!!

Written by Craig Mazin (Superhero Movie, The Hangover Part II) and directed by Seth Gordon (Horrible Bosses, Four Christmases), Identity Thief offers a promising flurry of laughs in the first 30 minutes or so, as Bateman does his doormat-who's-smarter-than-you routine and McCarthy barges around like a brassy tornado. But it quickly grows stagnant: Diana wants to party all the time, picking up strangers at bars and blowing Sandy's money; Sandy just wants to get home to his wife (Amanda Peet) and kids. So Sandy objects a lot, and Diana steamrolls over him, and for some reason here's Cameron from TV's Modern Family (Eric Stonestreet) having loud, comical sex with Diana in a hotel room.

This is one of those comedies that turn into action comedies out of desperation -- you know, where you feel like the only reason there are car chases and drug dealers and gunfire is that the filmmakers couldn't think of any more character-based jokes. ("They're on the road ... so now what?" "Homina homina homina BOUNTY HUNTER!") The gags mostly grab at low-hanging fruit, frittering away the marvelous potential of Jason Bateman and Melissa McCarthy on an odd-couple road trip.

Think of all the possibilities! Are you thinking of them? Then you're a step ahead of the people who made the movie, who got as far as "... then a bunch of wacky shenanigan hijinks capers happen" and stopped.

The flatness of the jokes and the wheezing, tired chugging away of the plot would be disappointing enough by themselves. Making it worse, almost to the point of being insulting, is the film's clumsy attempt to inject authentic emotion into its chaotic and unbelievable narrative. We're eventually supposed to feel sympathy for Diana -- but it's only because we've arrived at the part of the movie where that character usually gets redeemed, not because of anything we've been shown.

The movies that Identity Thief is borrowing from range from good (Planes, Trains and Automobiles, Midnight Run) to bad (Due Date), but the best of them have something in common: though their circumstances are unusual, the characters behave in a way that we recognize as the behavior of real human beings, with consequences that are at least vaguely similar to what we'd expect to see in real life. But Identity Thief is set in a world where:

- gas station attendants cut your credit card in half when it's declined;

- a $200 junker you buy at an auto wrecking yard comes equipped with GPS;

- you can rent a car, buy a plane ticket, and pay for hotel rooms without a credit or debit card;

- the police in all jurisdictions have little interest in catching fraudsters, no matter how many people they've robbed and how many thousands of dollars of damage they've done;

- your first and last name are changed every time you get switched to a new foster home.

I prefer to live in a world where Bateman and McCarthy make comedies worthy of their talents. Why can't I live in that world?