Watch The U.S. Trailer For Richard Ayoade's THE DOUBLE 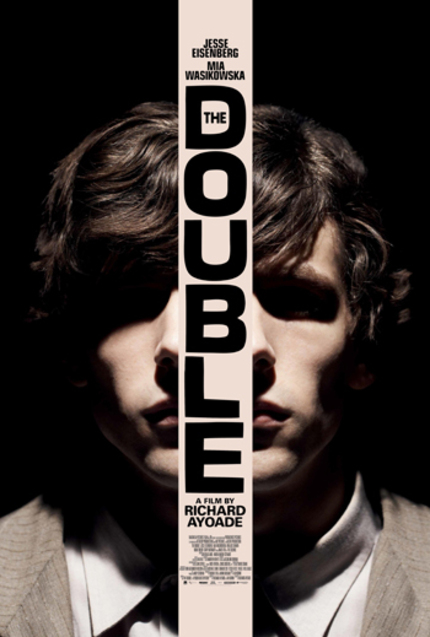 There is still some time before Richard Ayoade's sophomore feature film effort The Double hits cinemas and iTunes/OnDemand on May 9th. What it is time for is another trailer for Ayoade's dystopic comedy starring Jesse Eisenberg and Mia Wasikowska.

Simon is a timid man, scratching out an isolated existence in an indifferent world. He is overlooked at work, scorned by his mother, and ignored by the woman of his dreams. He feels powerless to change any of these things. The arrival of a new co-worker, James, serves to upset the balance. James is both Simon's exact physical double and his opposite - confident, charismatic and good with women. To Simon's horror, James slowly starts taking over his life.

Our lord and master, Todd, simply gushed about the film in his review from TIFF, which you can find a link for below.

The Double exists in a world of its own, a sepia drenched construction caught up in an existential crisis of massive proportions. And it's a world that Ayoade delights in, in his drily absurd way, lacing the entire thing through with a deliciously dry sense of humor...
Two films is too soon by far to be labeling someone a master but Ayoade stands alongside Ben Wheatley as vibrant proof that the future of British film is both quite odd and very, very bright. The Double is simply fantastic.

Do you feel this content is inappropriate or infringes upon your rights? Click here to report it, or see our DMCA policy.
jesse eisenbergrichard ayoadethe double