THE DOUBLE: Richard Ayoade Talks His Newest Creation And The Road From TV To The Big Screen 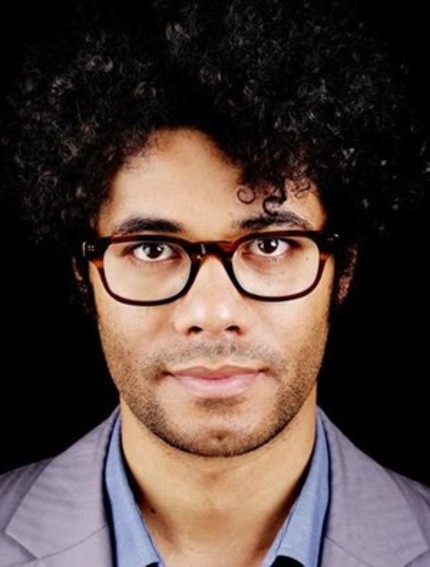 British comedy star Richard Ayoade has proven to be one of the brightest directing talents to come out of the UK in recent years and with his second feature film beginning its limited run on US screens this week it seems a good time to share the talk we had when the film premiered at the Toronto International Film Festival. It's a fairly wide ranging chat, going from his roots as a comedy performer through the transition to directing and heading to the big screen with a very odd adaptation of Fyodor Dostoevsky.

Todd Brown: Before coming here to meet you I took a moment to go back through the IMDB and the road you've taken to get here and it's really interesting. Back in the early days, when you were doing Garth Marenghi or The IT Crowd, did you even begin to think that one day you would be sitting here having adapted Dostoevsky?

Richard Ayoade: No, no. Not the least of it was my idea. Adapting The Double was Avi Korine's idea. That was from him and then I wrote it with him, eventually, but he started the whole thought of it.

I suppose initially, it's difficult to say why you even start in this because you can't image that you'll ever be able to do it as a job. Ever actor or writer or director always feels that they're never going to get another job again. You always tend to presume that the last thing that you did is it. And very often, in my case, it has been. I've done series where it was very clear that nobody ever wanted anything like that again.

When did you even have the sense that this was the direction you would go? You went to Cambridge for law, didn't you?

Yeah, I did. Well, there's this comedy society at Cambridge called Footlights ...

Where some of Monty Python started ...

So as a result of the brilliance of a number of people there in the 60s and 70s, Footlights gets a completely disproportionate advantage when they put shows on. So I did shows there with John Oliver, who's on The Daily Show now, and I guess slowly from there it started to feel like I might be able to write for a living. That was the main thrust, more than performing.

And you've been directing from early on as well, but largely on TV.

Yes, yeah. I was always interested in directing. I suppose ... for a long time people who did comedy ... I'm not sure how to explain this. It felt like when I was starting there was a change in how TV was going.

I think that's fair. I think there's a generation of UK people who all appeared at around the same time who have gone on to do really interesting work. You came in around the same time as Edgar Wright and Simon Pegg and Dylan Moran and Peter Serafinowicz ... you're all within a few years of each other.

Yeah, they were kind of before. I remember seeing Spaced mainly while I was in university and people talking very differently about it. It was more filmy than things normally looked on TV.

Before it felt like you could do those other shows and have a life on TV in England whereas now, you know, and when we did it there was other stuff on Channel 4. Maybe it's the influence of YouTube. It just changed a little bit.

And so it felt, from my memory, like The League Of Gentlemen was the last show that was odd and big and managed to stay on for a little bit. Even Spaced, I don't know how easy it was for them to really keep it. And so a number of those people ended up going into film instead. A number of people who were making things on TV are doing film now. Maybe there wasn't enough desire to keep those people on TV, in a way. Which is odd considering how successful Edgar Wright and Simon Pegg are but it's probably quite hard to get those shows on TV because in England - the way it's done on Channel 4 or BBC 2, the two outlets for those shows - it just became, I don't know. It just decayed slightly for a variety of reasons. Things like Friends and other American imports, which are really good and you can't argue with Friends and there are two hundred episodes of them. However good Spaced is, a scheduler is going to go, "Let's put this thing [Friends] on which has hit paydirt and it's got loads of episodes and it's really good."

What's your connection to Avi and Harmony Korine? How did that happen?

It's from the producers. They optioned Avi's script and sent it to me. I didn't know him at all. Harmony I only know through Avi.

Watching the film, there are some of the visuals in particular which really pop out and I was curious about some of your influences on it. A huge, huge film for me is Terry Gilliam's Brazil and especially in the office in The Double, is there a little bit of Gilliam in the cubicle farm?

It honestly wasn't too much of a thought, though I like Terry Gilliam. For that I was thinking more of The Trial, the Orson Welles one, even though that's on a very big scale. The script was originally more 'small man in a large metropolis' and developed more into making the world small. There's also In The Mood For Love. I like how you never quite know what's happening in those small offices, you don't really see much. They're very small locations, you're never beyond one of those fantastic production designs.

Brazil is a bigger world and more overt in the satire than what you're doing.

Yeah, I haven't seen it in a long while. It's not been one of those ones I've revisited a lot. From what I remember it's more of a 1984, Brave New World the universe-against-man kind of thing and what I like about Dostoevsky or Kafka or Gogol is that the universe doesn't care about you. It's not a malevolent dictatorship trying to exterminate you, it's just through a clerical error or through neglect that you disappear. I guess I prefer the more personal, existential approach to the more political, satirical approach.

I don't know Dostoevsky very well but Kafka I love and I've always found Kafka very funny, in a very, very dry way, which I think a lot of people miss.

Yeah, it is funny. I think that happened with Orson Welles' The Trial. When you read about it now, nobody thought when it came out that it was meant to be funny. But the first ten minutes of that film are one of the best choreographed and funniest openings of anything. It's timeless comedy but a bad dream as well.

You mentioned making the script a little smaller and more compact and I was really struck by the sense of space in general and specifically how there seemed to be a series of choices to say this could be anywhere, any place, any time. And the decision to cast multiple nationalities and have everyone speaking in their own natural accent at all times really fed into that.

Yes. That was the idea, to not place it in a particular time so that it could be a bit more like a dream. And have it all at night. I didn't feel like doing some of the book, which can be very satirical of class or bourgeois aspirations.

Do you find as someone who has been a performer and has moved on to being a director, that the relationship with your actors is fed by that? You have more or less an ensemble of people that you've returned to. I didn't realize how many of the Submarine actors were going to be back, and seeing Paddy in a small role, and Chris O'Dowd and Chris Morris ...

Well, I like all of those people a great deal and so it helps that you know them and you know what they're capable of and you're wanting the best from them in a way that is helpful. The work, it's really hard performing and if you get a sense that you're not doing it well or there's someone attacking you, it's just really hard to do it. So that's helped by people being friends. And often you have a very short time with actors. Two weeks' rehearsal is considered a luxury. So by knowing someone before you cast them, you have a good sense of them and they trust you.

How did you approach the technical aspect of having to double up Jesse?

Well, you try not to let it affect how you shoot it. We probably would have had it be no natural light anyway but part of it was, "Well, if we have some natural light it means that those scenes can't be motion controlled which means we'd be shooting some of the film in a way that would not suit that bit." We would try and work out how to shoot it in the way that's best for the scene and then work out the more difficult problems later. It can be quite slow and laborious and it's quite difficult for the actor because they're not doing something in real time as an actor, they're working with an actor that isn't there. The timing is very hard, they're hearing through an earpiece. What Jesse did very well was he managed to overlap with himself, which is extremely difficult because the thing you normally do is make sure that there's space for something to go wrong, if you need to adjust.

Did you have anything in particular you did with Jesse in terms of differentiating between, "Now you're Simon, now you're James"? There were some fairly obvious things in terms of posture that he was doing.

Yeah. Little, very small things. The idea was that they should be so close that there should be no reason why anyone would prefer one over the other from looking at them but at different points, from the empathy that each character has, you immediately know which one's Simon and which one's James. There are differences in the bearing and some physiognomy is based on what they're like. We had a slight lift in one of the shoes. James' costume gets slightly smaller.

There was one shot in the elevator at one point where I thought, "Is James slightly larger than Simon?" Or was that just a posture thing?

They stay the same but I think there is a posture thing. And being on the right hand side of the screen somehow is more powerful, I think, where back and left is weak.

Do you feel this content is inappropriate or infringes upon your rights? Click here to report it, or see our DMCA policy.
interviewjesse eisenbergrichard ayoadesubmarinethe double