Review: THE DOUBLE Confirms Aoyade As A Potent, Fresh Voice

It seems fair to say that when Richard Aoyade's debut feature, Submarine, premiered at the Toronto International Film Festival in 2010, it caught people by surprise.

There were few expectations on the little indie comedy from the large-haired comedian turned director, no big name cast to hang hopes on, and simply not enough information available for those not already devotees of Ayoade's comedy work to form any sort of opinion. And so people were caught somewhat by surprise when it became a huge buzz title from the festival that year, securing a big sale to a big company and, as buzz titles often do, ultimately dividing audiences into two camps.

On one side there were those -- myself very much among them -- who simply adored the film and considered it one of the most promising debut features in quite some time from a director who clearly was well on his way to forming a fresh and distinct voice. On the other side were those who considered it too twee, too indebted to Wes Anderson to take seriously, and dismissed Ayoade as just the latest example of a festival inflating the chatter around a director beyond what any 'regular' audience would ever feel appropriate.

Well, Ayoade is back now with film number two, The Double. A film that counts Spring Breakers director Harmony Korine amongst its producers, former IT Crowd co-stars Chris Morris and Chris O'Dowd amongst its cast, and is -- not surprisingly at the point because we've known it for quite a long time, but still quite odd -- adapted from a story by Dostoevsky. And now it can be said definitively: My side of the argument around Submarine was absolutely correct, those who dismissed Ayoade as an Anderson clone were wildly wrong, and what we have here is a fiercely intelligent, hugely idiosyncratic talent who is seemingly capable of going in any great number of directions and making all of them entirely his own. Two films is too soon by far to be labeling someone a master, but Ayoade stands alongside Ben Wheatley as vibrant proof that the future of British film is both quite odd and very, very bright. The Double is simply fantastic.

Jesse Eisenberg is Simon James, the sort of man who is not only easy to forget but is the sort of man that everybody does, in fact, forget. Soft spoken, indecisive, insecure, is it any wonder that his own mother considers him a failure and that his boss of seven years (the inimitable Wallace Shawn) can't even remember his name? Even the entry control system at work forgets him -- his keycard never, ever working and the security guard never, ever remembering him, thus forcing Simon to sign in to the building as a visitor every day just to get to work. 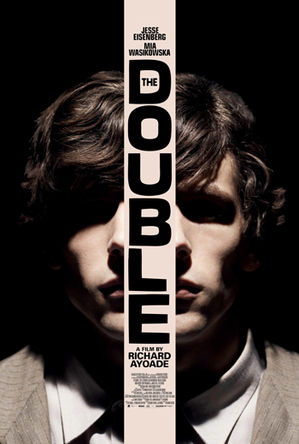 Somewhat tellingly, Simon's workplace feels like the bastard love child of Franz Kafka and Terry Gilliam's Brazil, a cubicle farm of data entry technicians logging and cataloging the personal details of thousands of people while lorded over by their benevolent master, The Colonel. It is as though while reducing people's lives to a set of data Simon has become himself nothing more than a number, stripped of any meaningful identity.

The one bright spot in Simon's life -- his one bit of hope -- is Hannah (Mia Wasikowska), the lovely copier room girl he pines for from a distance, hopelessly unable to work up the courage to ever speak to.

Simon's life amounts to a bland nothing for the most part but, if nothing else, at least that nothing is an orderly nothing, at least until the sudden arrival of James Simon. James is Simon's exact duplicate -- they look alike, they sound alike, they dress alike -- except, of course, for the simple fact that they are nothing alike. Where Simon is polite to a fault, James is brash and rude. Where Simon is afraid to speak his mind, James barks out orders. Where Simon is kind and considerate, James is an amoral schemer. And so, of course, everyone -- Hannah very much included -- likes James better. And Simon's already paltry life starts to get very much worse.

The Double exists in a world of its own, a sepia drenched construction caught up in an existential crisis of massive proportions. And it's a world that Ayoade delights in, in his dryly absurd way, lacing the entire thing through with a deliciously dry sense of humor. Eisenberg is as strong as he's ever been in his dual role, Wasikowska quietly radiant as the object of his affections, and the supporting cast -- which includes virtually the entire principal cast of Submarine in some role or another -- stellar from top to bottom. The direction is impeccable, the script -- co-written by Ayoade and Avi Korine -- equally so, the overall film very nearly flawless.

Will The Double appeal to everyone? No, of course not. But if you're the sort who has been known to break out laughing at Kafka, then it doesn't get better than this. Very highly recommended.

Review originally published during the Toronto International Film Festival in September 2013. The film opens in select U.S. theaters, On Demand, and on iTunes on Friday, May 9. Visit the official site for more information.

Do you feel this content is inappropriate or infringes upon your rights? Click here to report it, or see our DMCA policy.
Jesse EisenbergMia WasikowskiRichard Ayaode