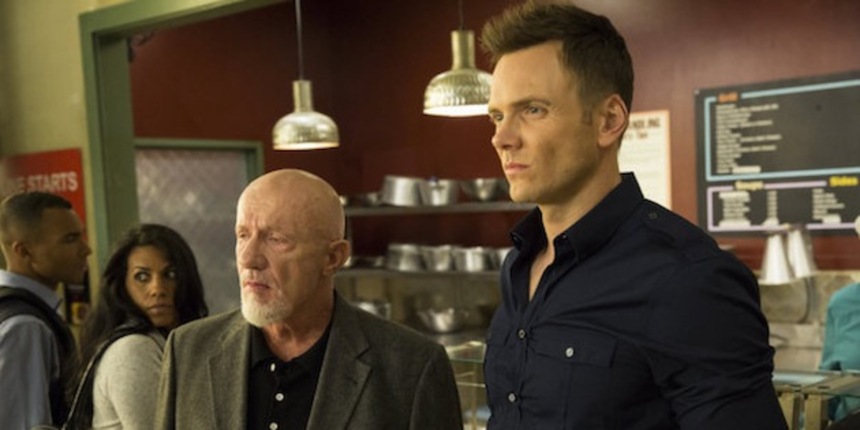 There's probably a good three to five paragraphs I could spend clumsily wading through the history of Community, with it's ups and downs, successes and pitfalls. But if you're reading this review that means you're most likely a fan; a survivor of that history, and so you know it by heart and it's been uplifting and disheartening. So let's just get to it...

Season 5 is here. Creator Dan Harmon is back in the showrunner chair writing the wrongs of season 4, and quite possibly addressing the more off-the-rail moments of his own initial run.

NBC debuted the first two episodes back to back tonight and rather than writing two full reviews, I'm gonna summarize both, then let the eps play off of each other a little bit.

First up was "Repilot", Harmon's nod to the trials and tribulations behind the scenes, which now after 4 years with this show, all ties in nicely to what we get on screen. After an unsuccessful stint as a "good guy" lawyer, Jeff is offered by his old partner/nemesis Alan (Rob Corddry) an opportunity to take down Greendale. Alan is defending the engineer of a bridge that collapsed upstate... an engineer who just so happened to get his degree at Greendale (his thesis was a poorly constructed bridge made out of LEGO bricks). Jeff's job is to coerce the school to give up the engineer's student records, and well, it's a prime moment for Jeff to evaluate his past lives, especially when Abed calls in the old gang (minus Pierce of course) (thought we do see Chevy Chase as a hologram).

It's a morally dark place to start off at, but perfectly plays to Jeff's (as well as Harmon's) fears of inadequacy and of his actual abilities. It puts a lot of emphasis on Greendale being a terrible place, perhaps it's most straight up cynical take on it yet, and one can feel how Harmon and his team are working through their own frustrations at trying to surmise something that they clearly love, but also something that they don't really know if it's worth holding onto anymore. All this is put forth when Jeff states that Greendale made the study group worse off than they were when they began, which is brilliantly distilled in the line "When we arrived here we were real people and we were then twisted into cartoon characters." This gets a cherry on top by the Britta-centered followup: "You were the free radical anarchist who became the group's airhead." So where are they now? Shirley put all her time into Shirley's Sandwiches and lost Andre and the kids because of it. Annie works for a big Pharma company. Britta is a bartender (the modern psychiatrist). While Troy plans on suing Abed once his new social media app is ready.

Jeff's initial goal is to get the group to turn against Greendale by testifying against the school, but the tables are turned when they decided to re enroll and get their lives back on track, which eventually leads to Jeff admitting he's broke, deflated and so might as well sign up as a teacher.

"Introduction To Teaching" brings in Jonathan Banks as Greendale's Criminology professor, Buzz Hicky, and Jeff's guide into the very different world of a Greendale teacher. Or well, not so much. The main lesson of this episode comes to a head when Jeff tries and sort of succeeds in proving that Greendale is a unifying place. Losers are on both sides of the student/teacher line, even if the students revolt in perfectly crazy Greendale fashion. It's a much lighter episode with the resident silly subplot, which brings back Kevin Corrigan's wonderfully bizarre Professor Sean Garrity... this time with his class "Nicholas Cage: Good or Bad". It calls back to the "Who's The Boss" class, which led to that professor breaking down because of Abed's conclusions on Angela and Tony. This time (of course) Abed is the one who breaks down. And how sweet it is to all be brought on by watching Nicolas Cage movies (Danny Pudi's Cage-esque wiggling and such was excellent). And while we may have needed a beat or two more, Abed's conclusions about needing to let movies go for the way they limit his worldview is a great seed to plant for his own growth, especially in the face of Donald Glover's departure.

As both eps go the first honed right in on Jeff's dilemma, sidelining the group outside of the way Jeff would or would not manipulate them. The second gets going full tilt with Banks being dutifully cranky (and also being very, very mean to an earring wearing Leonard), pitting teachers against students... plus the Dean learns Excel!

All in all we're off to a good start for a show that probably shouldn't be around anymore, but is. A bit of a reboot makes sense, but unlike last season's changes, these feel more in line with... well how much this show does change. And often. Community is a chameleon; one whose defining feature is not the wacky homages or bizarre meta bits, but the fact that it wears its weary heart on its sleeve. I'm glad Community is back in some form. This version made me laugh quite a bit and that's what counts most in a good sitcom. Community is a good sitcom. And we've got at least twelve more weeks of it.