Review: COMMUNITY S6E05 "Laws Of Robotics And Party Rights", On Manipulation And Stereotypes 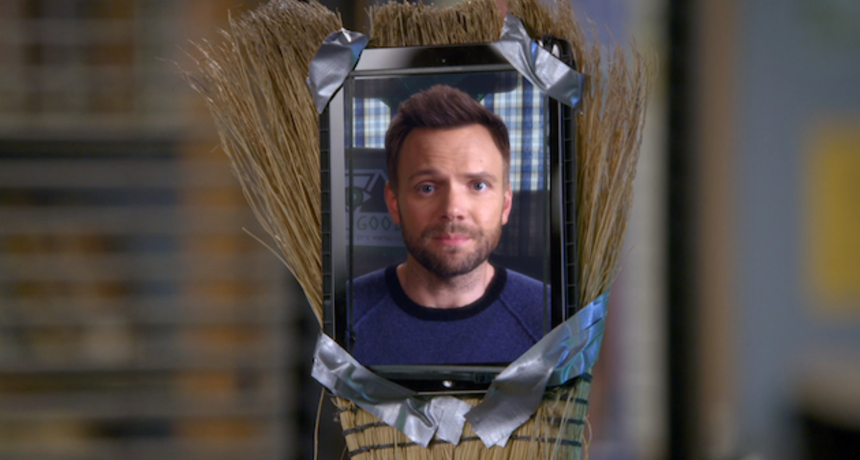 Like a prison inmate controlling an iPad mounted remote control robot that loses balance and tips over, this episode of Community just falls flat.

After letting a once disgruntled ex-lawyer turned-professor sit back and soak in the group dynamic of this season thus far, the writers make an effort to give Jeff Winger a conflict for an episode, resulting in what may be the most disjointed, inert episodes of the show since the much maligned gas leak season. As a result of Jeff falling back into some old patterns, a few of the other remaining original cast members fall into some woefully base versions of themselves -- namely Britta and Abed, in a side story that goes nowhere... unless you are really looking forward to one of those hokey freeze frame fake show titles again.

The catalyst to stir such feelings in Jeff goes as thus: In another effort to make some money for Greendale, Frankie urges the Dean to allow Colorado correctional facilities to allow inmates to attend the community college via those iPad mounted remote controlled robots I mentioned in my lousy opening analogy. With 300k in their pockets from the state, Jeff basically orders the Dean to do it. One inmate named Willie, begins to charm his way into the heart's of Jeff's class, while calling the professor out on his lazy teaching method (I don't think watching Planet Earth covers the fundamentals of law, either). With Jeff losing ground, he begins to feel bullied out of his own comfort zone: a place where he does all the manipulation and can coast through life.

In a pitch meeting, perhaps this sounded like a clever idea to bring some darker shades back into focus for Jeff, while running with a seemingly silly gag. The execution however -- for both a class on iPads with wheels, as well as Jeff's subsequent breakdown and redemption -- feels numbingly rote. I am rarely one to bash on a beloved show's attempts at humor and gravitas, but nearly the entirety of this episode was charmless, vacant, achingly long in the tooth, and reliant on insultingly one-dimensional takes on main characters. It's as if no one wanted to do this episode but they had no other ideas to get to production in time.

This is where the Britta and Abed story comes in. Britta wants to celebrate midterms by having a party at their place. Annie is against a rager, which is anything over 8 people. Britta shouldn't get to vote on this, especially since she is just a "coucher" (Abed turns this into a Seinfeld-ian riff, which feels totally lame). Abed can't be persuaded to have a party, which just seem like "conventions for things that are boring". He simply states Annie makes rules and he makes movies. In an effort to get her way, Britta manipulates Abed into filming a script she wrote called "Britta's Party", wherein must everyone must party like there is no tomorrow. The results make Britta out to be selfish, stupid and whiny; ugly traits of the character that they've struggled to balance before, but with much more ease and humanity than here, which just feels lazy... a cartoon Britta stereotype.

Meanwhile, this must be one of the most stereotypical and unnuanced depictions of Abed's Aspergers/Autsim spectrum in a long while. While one may argue that he filters his understanding of the world through TV and movies because, in this instance, he can't fathom why anyone would want to have a party, this alone feels dangerously in favor of plot and myopic-muppet behavior than a complex understanding of someone's psychology and difficulty with emotions (which even the claymation Christmas episode dives into deeply). 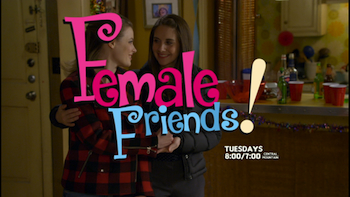 Could this all be a sly take on how we shouldn't box anyone into certain roles based on their gender or emotional state or criminal status? Yes, with a gag like the one pictured to the left, I'm sure that angle will have its defenders, but there are many wrong turns between intentions and actions, and "Laws Of Robotics And Party Rights" felt off the whole time.

With another episode lagging on towards the 30 minute mark, with no sign of a strong focus for story or structure in sight, I'm beginning to question the intentions of the show's return and my own enjoyment of it. Tonight's episode actually made me go: "Did they merely do another season just because they could?" Stay tuned till next week... though I'm not sure outside of my obligation to do these reviews if I actually would.