"And Jesus wept. For there were no more worlds to conquer..."

You'll excuse me for paraphrasing Dean Pelton's own paraphrasing of Hans Gruber and Alexandre The Great, but not only was his line one of the funniest bits on the second episode of season 6, but also one of many interesting little metaphors plastered across a show, which has mostly been about its own apparent destruction and rebirth. It's way of surviving all this has been about embracing the strange, amorphous nature of change, and thus, creation. It's not always been pretty, but, to paraphrase another line from today's pair of episodes, Community has always been, with great welcome, "weird, passionate and gross." Okay, maybe not that gross, actually.

Anyone who's returning to my reviews of the show I am assuming is a hardcore fan. Thus, we all know the upheaval this cult favorite has gone through since 2009. We are the cult. With every passing year, every chance of cancellation, departing cast member, actual network cancellation and rebirth as a streaming show on Yahoo Screen, we have felt each blow, fallen to our knees, and either gotten back up to fight again alongside our favorite band of Greendale misfits, or else shuffle off into the sunset, leaving a once favorite show behind.

This hasn't been the first year I've approached the prospect of new Community... more Community... with trepidation. After all, with a show so beloved and beleaguered, there is the fear of diminishing returns. Or perhaps lets consider the image of beating a half-dead horse... far more horrifying to the kiddies than say... beating just a dead horse. But if the Dan Harmon-less "gas leak" season 4 is the lowest point of however long Community will run, then I'm absolutely fine with that.

What we get in episode 1 & 2 of Season 6, titled "Ladders" and "Lawnmower Maintenance and Postnatal Care" respectively, is a show that is its own best champion and worst enemy. There's a lot of irony laden on Community's path for it is a show that straddles self-indulgence and self-awareness like no other. Most half-hour comedies create little myopic worlds, stitched together by characters we'd often deem a bit psychotic in real life. When Jerry and his friends left New York City on the Seinfeld finale, they were imprisoned for their vile behavior. When the gang on It's Always Sunny In Philadelphia encounter others, they often erupt in fits of rage and destructive scheming. What makes Harmon and company's take on the half-hour comedy a little different is the fact that their characters accept the looney-ness  with an open heart, one that isn't fueled by urban pessimism or maniac-led machinations.

The students and teachers at Greendale, for good or ill, accept the place they are at in the moment. They celebrate their weird little school, sometimes even revere it, and as Season 5's main through line saw, preserve it in the "Save Greendale" campaign. Even as we've seen the departure of core characters like Pierce, Troy and now at the top of this season Shirley, there's something more sweet than bitter about the fact that Jeff, Britta, Annie and Abed are still futzing around a community college campus they could have left years ago.

"Ladders" sees Jeff for the first time in the show's run not mentioning his lawyer past, his desire to define himself as a hotshot in all avenues of life. He's merely a teacher at Greendale, concocting crazy schemes with his friends. There's growth here, an ease that's actually kind of relaxing to see. He's no longer battling the notion of himself in this place. When the Dean hires Paget Brewster's Frankie Dart as an administrative consultant to help clean up the school, it's Abed who accepts her role first, with Jeff, Britta and Annie opening a speakeasy to undermine her "no alcohol in the teacher's lounge" ruling. They want Greendale to stay weird.

What is neat to see reinstated here is a group of people overreacting to something and then it turning out relatively okay. Frankie isn't a bad guy. In fact, she could probably use some friends. As sort of the audience's avatar, Abed gets this. And that's kind of the modus operandi of Community: "Yes, things get dicey, things change, and sure people get weird, but in the end you're fine." Or, in words that may speak more directly to us diehards: all timelines get a little dark, but not one of them is the darkest. 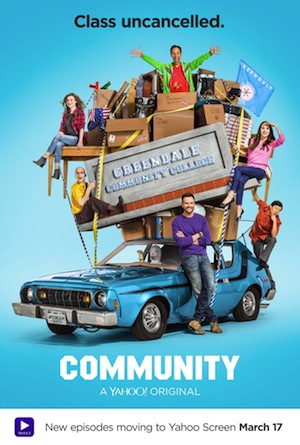 In "Lawnmower Maintenance and Postnatal Care" it's Dean Pelton and Britta who go off the deep end, with their friends in tow, ready to accept them for their craziness. In the Dean's case, he gets hooked on a 1990s VR set that he unwisely purchased for the school. This leads to Jeff and Frankie seeking the help of the VR system's inventor Elroy Patashnik, played by Keith David. It's also where the great line this piece opened with came from. Jim Rash is as spot on as ever as Craig Pelton, embellishing nonsense with a wonder and bravado that is stupendously silly.

Meanwhile, Gillian Jacobs gets to show us Britta at her best/worst. Homeless in the season's first episode, Britta is now moving in with Abed and Annie. She'll sleep on a pullout that was purchased not by Annie or Abed, but by her estranged parents. Turns out that the Greendale gang has been pals with Deb and George Perry for years, as they've helped fund Britta's friends funding Britta.

Naturally, she is pissed, (she yells, spitting vile remarks left and right, stealing a kid's big wheel when she can't drive off in her clunker of a car), for her over protective parents were the very reason she rebelled in the first place. Thing is, her parents own up to their mistakes, and come off as kind and sensible people. This is a story long overdue on the show, and helps bring further insight into just who Britta Perry is. We tell stories to ourselves to feel stronger or better about ourselves, only those stories can often alienate and harm us. Britta's take away from a talk with Frankie about children and parents isn't all bread and roses, which helps color in her scars better. For by denying Britta clean and easy answers, we are witness to and embrace the whole Britta Perry: warts and all. It also helps that Deb and George are played by Martin Mull and Lesley Ann Warren, comedy vets, who fit into the larger world around Greendale comfortably.

So I suppose if you've managed your way through what has become more a think-piece rather than straight up review of the show, you're wondering if these episodes are up-to-snuff funny. Writing about how a joke or gag lands is damn hard, and also detracting of one own's personal reaction. It's why I've largely shied away from that in my reviews, but yes, I think these two episodes are funny.

In the grand scheme of things the start of Season 6 comes out a lot like Season 5: It's visibly wary and worn, but still capable of surprising like few other shows on air or online. That's in large part because Harmon and his writers understand their show's inherent struggle of existence in the real world, and are adept at utilizing and expressing such things within the show's word. The chemistry between a broken and rebuilt cast feels shaky at times, but within such territory as this that feels natural, too. By and large the remaining original members roll with the punches well. Brewster and David as our new reoccurring characters are still too new to tell what their worth will be, but I like both actors and their prospects. The show still doesn't quite know what to do with the presence of Ken Jeong's Chang, but that too has become a bit of an in-gag, with the former Spanish professor orbiting around the rest of the gang with his own little asides and non-sequitors.

Outside of a longer 25-30 minute run time, the structure of the show hasn't really changed radically now that it is on a streaming service. Pacing for most gags work, and there's more room for characters to breath (consider the more natural setup in the Britta story). Clearly it is still being written with commercial/act breaks in mind (probably for foreign TV markets, but maybe for certain platforms stateside? I had no ads on Apple TV). It also seems that the locations budget is bigger (More location shooting at LA City College), as is the budget for licensing popular music. That offers us a few good gags, especially one involving Leonard.

As it goes, Community is here for at least one more round, and I'm game. Following suite from the show's self-prescribed "Six Seasons And A Movie" mantra, will said movie follow this season? Or a seventh season...

While Community is now on an online streaming service, Yahoo Screen will, from next week on, be releasing one episode each Tuesday, nearly like the Television shows of yore. I'll be checking in with a review of each new episode sometime shortly after they begin "airing", so with that, stay tuned!