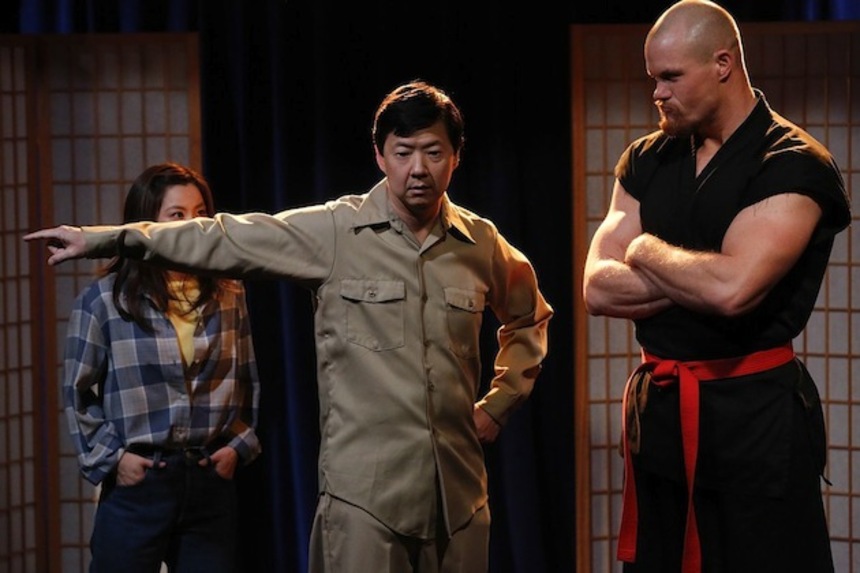 In a comedy show, the cold open can be a glorious thing.

It can set the tone for the rest of an episode, prepping us for the stories to unfold, or be its own little mini-tale, absurd, irreverent, and charming. Community's best cold opens are undoubtedly ones where our Greendale gang gather in their beloved study room, often with multiple instances of riffing and joking, poking, prodding and corralling occurring.

"Queer Studies And Advanced Waxing" gives us the first fully comfy instance of study table buddying to occur this season, with Frankie and Elroy sitting in their spots (once respectively Pierce's and Shirley's seats). Annie helps Chang prepare for an audition of a local theatrical production of The Karate Kid. Elroy aims to convince Jeff why he wants to sue the makers of Donkey Kong (a game that riffed on his own involving snakes, trees and eggs?!). When the Dean enters, the group, like peasant masses to an overlord, they declare that the Wi-Fi is down, then proceed to scare the Dean into a frenzy of pen and paper scribbling by yelling in unison "WI-FI! WI-FI!"

Here we have a fine-tuned amusement park ride of jokes and characters intersecting with real spark. It is my favorite moment of the season by far, for its familiarity and its freshness, for its use of new and old characters alike. It runs far longer than past season's cold opens, and it works like clockwork.

The remainder of the episode also runs quite a bit longer than all other episodes up to this point, and it... doesn't always work.

The A, B and C plots of the episode essentially get equal airtime, arguably eliminating the need to name them as such, which in theory is kinda cool. But a 30 minute Community episode where we sideline some leads and focus separately on a handful of others, often feels tedious and ponderous in execution. It's a bump in the road to what I hope will be a better formula for these longer episodes down the line.

As it goes, The Dean is asked to join the school board, if and only if he comes out as being gay. This means pairing his sexuality way, way down from what it is. Quite the dilemma, and offering some funny moments as the Dean questions whether or not he should.

Meanwhile, Elroy and Abed become Greendale's new IT guys, preparing to solve the Wi-Fi issue, until the find out a bird's nest sits atop the router. If they move it, the mother won't return, so instead, at Abed's insistence, they guard the nest until the mother returns.

Away from campus, Annie and Chang go to the audition where Chang is to play the part of Daniel-san. Instead, the director of the play, played with his usual vitriol, by Jason Mantzoukas, picks Chang to be Miyagi and Annie to be Daniel. The director then physically and verbally abuses Chang throughout rehearsal, to such breaking points that Annie isn't sure if she should speak up or just walk in protest.

Jeff, Frankie and Britta are the ones sidelined this time out. Indeed a rarity for Jeff. Though we do see Annie drinking at the bar Britta tends, a moment where the largely frazzled Britta (at least this season) is quite level-headed in giving clean advice to her friend.

Each story in its own way attempts to deal with morals and ethics, asking whether truth is relative, what the right thing to do is for personal conviction, or for the grater good. The Dean feels like he harming himself by lying to the public. Annie loves being the lead and doesn't want to get fired for standing up for her friend. Abed is willing to sacrifice the school's Wi-Fi at the expense of saving a few baby birds.

What largely loads the episode down is, unfortunately, the Dean's story. While I love Jim Rash in this character, the dilemma here, after his initial questioning on whether to join the board or not, felt far too one note. The magazine montage, complete with a "Gay Dean" song set to the tune of Dolly Parton's "Jolene" did not hit for me. His decision to step down felt inevitable, and thus, kind of moot.

Chang's story varies in mileage depending on how much you like The Karate Kid and can tolerate Mantzoukas' venomous shtick, which I found tiresome. This one does have an amusing twist, plus it's nice to see the rest of the gang consider Chang as a more rounded person, when he uses year's of turmoil and anguish to wow them in the part of Mr. Miyagi.

Moving ahead with these longer episodes I hope Harmon and company can get our whole gang together on screen for adventures, solving problems as a group etc. Because Community is at its strongest when everyone is bouncing off of each other, and if the 25 minute plus episode is going to be a regular thing now thanks to Yahoo Screen, we need our team all in.