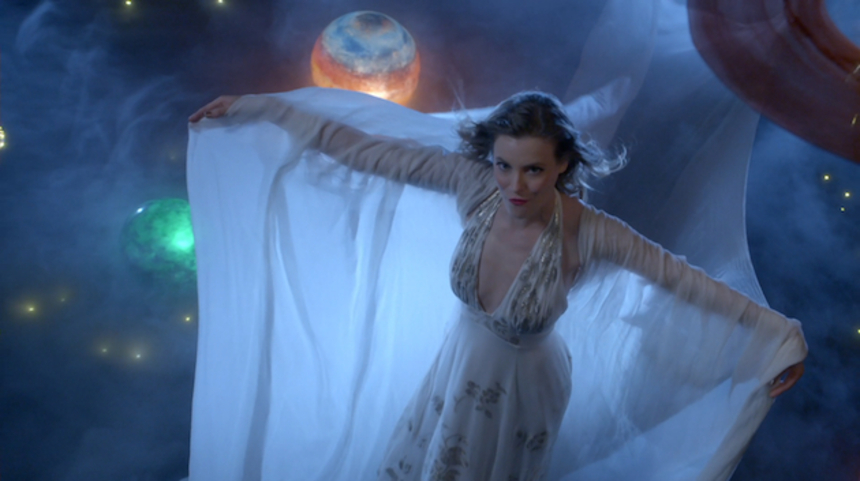 "Basic Crisis Room Decorum" doesn't in any way shape or form attempt to wow us with a hairband scheme, wacky hijinks, blockbuster homages, or even, despite that title, sensational End-Of-Greendale crises.

It starts with what sounds like some rather pressing news (Pressing enough that Annie is able to coral the whole gang to the study room at 3am), but ends with that classic Community bonding moment. In some respects this is not the episode to determine the pulse of where the show is at right now. After all, it's only the third of the season. Yet it's also not just an average episode (at least in any iteration of the show from Season 2 on), because for the first time in a while (since "Bondage and Beta Male Sexuality" last season I'd say) the show delivers a story that isn't all that funny in a laughs/jokes sense, but neither feels lacking because of it.

Tonight's (today's, this morning's) episode is all about the more nuanced character strands, some tender, some ruffled, others intent on being pornographic (Okay, that's Chang and not nuanced in anyway).

That pressing news which brings the gang together, including newcomers Frankie and Elroy (Dave and Vicky also get a nice moment), is that arch rival City College is at it again. This time they'll be running a negative ad against Greendale at 7am on a local TV station. Abed uses his connections to the Brotherhood of AV ("The Brotherhood of AV exists beyond your petty factionalism. We worship the Queen Video...") to secure the ad which states that Greendale let a scrappy terrier named Ruffles attend classes and get a degree. The Dean is unable to confirm or deny this.

Yep, that's the plot. Everyone freaks out to some degree, with Jeff going into smarmy lawyer mode, spouting some stuff about the relativity of truth. Annie gets flustered Disney princess style, and Britta... well Britta is drunk and may have shit her pants, so she best get some coffee.

Comedian and filmmaker Bobcat Goldthwait directs from Monica's Padrick's script. A staff writer since last season, this is Padrick's second "written by" credit, her first being the possibly outlandish, but actually pretty grounded "Analysis Of Cork-Based Networking". "Basic Crisis Room Decorum" is even more low-key. With quieter moments of characters bonding the words "Basic" and "Decorum" certainly have more sway over something as bombastic as "Crisis" (no Garrett bellowed alerts here). I've also seen enough of The Newsroom at my parents' house during holidays to know there's an homage to Aaron Sorkin's HBO show happening here, with lots of smooth tracking shots across rooms as people give firm if oddly laid back speeches on truth and ethics, and relativity and hope, in the middle of the night.

The bonding comes with Annie and Frankie teaming up to find Ruffles' records. Here we get to see Frankie's well-adjusted approach again, her acceptance that things are a little weird at Greendale, including the myopic group dynamic, but that's okay with her. The big draw from these scenes is the actual rising crisis of the episode, in that Annie's been feeling undervalued and overused by Greendale. After all, if a dog can get a degree here, then doesn't that make City College better? Annie's steadfast loyalty to Greendale and her sense that she also deserves more hasn't come up for a number of seasons it seems (and we haven't leaned so heavily into it since her decision to leave with Vaughan all the way at the end of season 1), but it feels negated here by more speeches and well wishes from friends. I for one hope that Annie's discontent is a seed to a larger arc over this season. Some real growth in this character has been sorely lacking, and Allison Brie needs to stretch a little bit before she falls into one-dimensionality.

Meanwhile, Britta sobers up by having coffee with Elroy in his RV, where they bond over 90s alt rock band Natalie Is Freezing (with Alanis Morrissette inspired lyrics). It's a nice moment that shows Keith David getting to add more flavor to a character that may have at one point on the page just read as "eccentric old scientist". As it goes, he is still a bit baffled by the folks, but he seems he'll be a good bonding agent for the group, far more kind up front than either Pierce or Hickey ever were. Gillian Jacobs again gets to show the sloppier side of Britta with the perfect amount of vulnerability and goofiness. The "Delusions Of Grandeur" image that headlines this article perfectly captures that.

And that's about it. The episode doesn't pack any real punches, or big truths we haven't faced before, because well... in the grand scheme of things a dog attending Greendale is far less insane than a slew of paintball wars, space simulator disasters, apocalyptic lava games, or even any number of the Dean's dances. The quiet space and breathing room in the episode's 25 minutes may sound like dead air for a comedy, but with a visit to Greendale in the wee hours of the morning, it ends up feeling a little ruminative. Which was largely welcome I thought. And, if the show is aiming to be a little more like season 1 in attitude, indeed warranted. Though again, I don't wanna take that pulse just yet.

Where the hardy-har humor hits is in the Dean's side story in which he believes he is texting Jeff, when it turns out it is a teenage boy in Japan. The story cleverly builds in the background until we get a closing moment that is absolutely the most absurd thing of the night.