FICUNAM 2014 News: Sono Sion's WHY DON'T YOU PLAY IN HELL To Premiere In Mexico 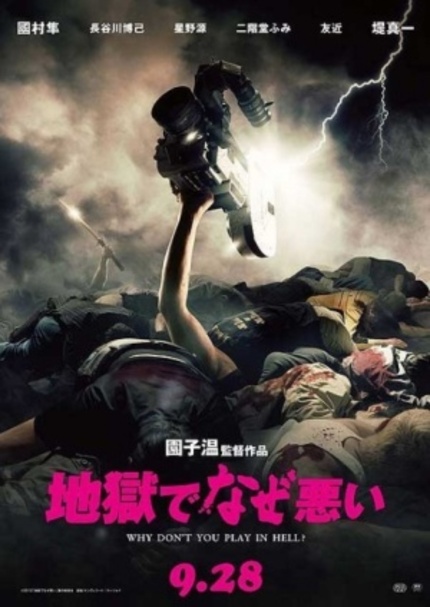 The International Film Festival of the National Autonomous University of Mexico (FICUNAM) will celebrate its fourth edition from February 27 to March 9 in Mexico City. The press conference is yet to happen but little by little the organizers are revealing this year's lineup and so far the news that will get you, the ScreenAnarchy reader, most excited is definitely this: FICUNAM is set to host the Mexican premiere of Sono Sion's acclaimed latest film, Why Don't You Play In Hell!

In part, this is not a surprise since FICUNAM also brought Sono's Guilty of Romance in 2012 and Roger Koza (one of the festival's programmers) recently organized a poll, a la Sight & Sound, with the best of 2013 according to critics, filmmakers and programmers, in which Why Don't You Play In Hell ranked fifth with twelve votes.

This is for sure one of the most anticipated 2014 releases and Mexican audiences have proven to be mad about Sono's work; Cold Fish, Himizu and Guilty of Romance had successful runs at Mexico's National Cinematheque (Cineteca Nacional) not long ago.

FICUNAM confirmed Why Don't You Play In Hell as their annual drive-in movie, but at least a couple of regular screenings should be added next.

Read Todd Brown's Why Don't You Play In Hell review from TIFF here.

Do you feel this content is inappropriate or infringes upon your rights? Click here to report it, or see our DMCA policy.
Sion SonoJun KunimuraFumi NikaidouShin'ichi TsutsumiHiroki HasegawaActionComedyDrama