THE HOBBIT in HFingR: An Unexpected Journey To The Glory Of 48fps 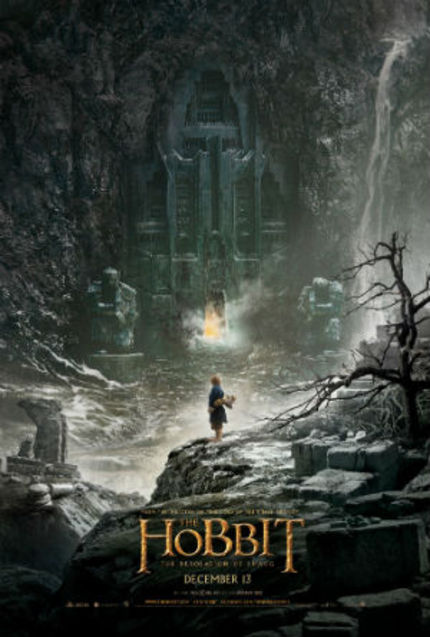 At ScreenAnarchy we like to write not just about films, but about film. One excellent example, of many, is Matt Brown's regular and incessantly thought-provoking column, "Destroy All Monsters," which tackles myriad cinematic topics that, well, make him twitch. My own background is in engineering, and consequently film technology is a subject that makes me twitch. I also have a deep and decades-long interest in Tolkien; his literary works, his life, and Peter Jackson's film translations. So the introduction of high frame rate (HFR) shooting and projection in The Hobbit: An Unexpected Journey (TH:AUJ) was a fascinating issue for me, particularly when coming from the hands of Peter Jackson. You see, I cut my teeth on the film-making process by watching every single one of the production diaries PJ & Co. released over the 5+ years of Lord Of The Rings production. They were, and indeed remain, an unprecedented window into film production, and this generous spirit combined with his sublime translation of the books have won PJ my unwavering support.

So, it was a very hard hobbit pill to swallow when my first viewing of TH:AUJ, which I diligently went to see in 48 frames per second (fps), was all but ruined by the strange visual signature of the HFR. It is no great insight to point out that the quintessential cinematic experience is necessarily immersive because it is just that, an experience. For this immersion to happen we must be drawn into the story, and lose our presence of mind. When we don't engage, or are disinterested, or worse, become disinterested as the film progresses, we float up out of the experience and find ourselves observing the film instead. I maintain this is the foundation of the complaint people have with HFR. The 48fps format was simply so noticeable, and so persistently noticeable, that we were repeatedly extracted from our experience in Middle-Earth and reminded that we were merely watching a movie about it. The HFR effect, not the film itself, dominated the experience for almost all of us the first time around. If it had looked different but didn't disruptively inject itself into the experience then I think we would have heard far more about the positives.

The truth of the matter, I've discovered, is that this HFR effect is temporary, and literally disappears upon multiple viewings. And once it fades we discover the true glory of HFR, and can finally see what compelled PJ to adopt the technology and convince the world's cinemas to do likewise. Here follows an account of my experiences watching and rewatching TH:AUJ in HFR.

A match ignites, and a candle is lit. Cut to Bilbo (Ian Holm) tottering down the corridor.

Oh God, what have they done! The naysaying bastards were right, it looks like fucking soap opera TV! No, no Stuart, calm down, it doesn't. Really, it doesn't. It looks like a billion bucks! Just... so real... so weird... so... theatrical! Yeah man; this shit's so real it's like watching theatre. That's cool right? Riiiight?

And so it went. Damn near three hours trying to convince myself that the HFR effect wasn't a negative... just an unappreciated new type of positive. It was a noble commitment to optimism, but ultimately the experience was irredeemable. The film itself didn't disappoint; the acting was superb, the shire was resplendent, the action was riotous and the sum total was righteous. But for all the fullness it felt empty, and worse, it felt long, which says something coming from someone who has no qualms whatsoever rewatching the Extended Editions of the entire LOTR trilogy.

It says that I watched the film... that I couldn't disappear into the experience without being constantly pulled out by HFR intrusions that grabbed my attention and reminded me I was in a movie, not in Middle-Earth. For all the very real joy I took in seeing what I saw, I was gutted by how disconnected I felt from it all.

There was a second time after all that? Ringer please. Of course there was. One does not simply accept that something disappoints when the only evidence is a single viewing, in a completely novel format, of the most personally hyped film in a decade. Especially when countering that evidence is the sum taste and conviction of Peter fucking Jackson. I concluded that there was simply no way that he and I were watching the same film. This goes without saying really, because we all see different films in the same film, and the divide been filmmakers and film watchers is especially deep, but something fundamental to our perception was out of sync. I knew he must have watched thousands of hours of HFR footage, so perhaps he had just grown to like it. And perhaps I could too.

The difference between my first and second viewings was revelatory. This time I was able to sink into the film for long periods, and though I was inevitably still pulled out by HFR moments, these came far less frequently than just one night earlier. In fact, I recall actively trying to see what I had seen the night before, and not really being able to. The experience of seeing 48fps as I had that first time simply was not accessible to me, and the distinctiveness of the look seemed harder to discern in many scenes. And this got me to thinking.

The previous night, what my eyes were perceiving was utterly novel, and thus very different to what my brain was expecting to see. As you may or may not know, though the Gorillaz have been telling us for years: "You don't see with you eye, you perceive with your mind." The vast majority of what your eyes pick up is simply ignored by the brain, which layers what we perceive over existing mental models of reality based on accumulated past experience. We all expect a 24fps movie experience, and when the signal to our eyes diverges dramatically our that movie mental model we notice the differences. Our brain is literally noticing conflicts between the data coming in and the expectations of its model for that experience. However, every new experience is incorporated into the existing sum of Stu, and it made complete sense to me in hindsight that my mental model of the cinematic experience would have been updated with the new 48fps data. My expectations had expanded to include, at least partially, this new palette, and the difference between my expectations and reality was thereby diminished, and less noticeable.

I walked out of the cinema buoyed by the experience. It wasn't quite the familiar cinematic experience I wanted, but it was a gargantuan leap closer than it had been the night before. And this time I was able to sit back and enjoy what the HFR had to offer without the anxiety of bitterness that hovered over me previously. I still hadn't seen the film in 24fps, but when I did shortly thereafter it was striking how much clarity was lost in the slower frame rate, especially in large panning shots. Of course the comfortable familiarity of Middle-Earth in 24fps was immediate, and drove home what I was still missing in the HFR version. So much so that I encouraged people to see it in 24fps first if they were serious fans of the LOTR films. But I definitely felt that I was beginning to get why PJ was so ardent about 48fps.

I had every intention of immediately going to see it in HFR again, but life and Christmas got away from me and it would be almost a month before I was able to catch it at 48fps a third time. Would the progress my brain had made be lost?

Really, THREE times? Yes. And the 24fps version (2D) in between second and third. And after. I saw the film 6 times in theater over the course of its long run, 3 in HFR and in 3 in 2D 24fps. Like I said, I'm into this shit, and once I realized how significant the difference was between my first and second viewings I couldn't deny the inner scientist in me a third data point. I was now in the midst of a series of experiments to observe how my perception of HFR changed, and it was a fascinating experience to literally watch my brain recalibrate it's interpretation of my eyesight. Now admittedly this is of course purely qualitative; there is no way to extricate the many other factors that play into how our experience of films change with multiple viewings. However, my chief concern was the relative negative impact of the HFR effect on my experience. And that went from being a hands-down negative, to being a neutral, to being a hands-up hell-yeah positive.

That's right, the third viewing was absolutely glorious. I lost myself for the entire film, which now felt very much like the 24fps movie experience, only draped in a colour and brightness and clarity that I can only describe as akin to the shift from DVD to BluRay. Maybe VHS to BluRay. I walked out with absolutely no reservations about HFR. I disliked nothing about it, and loved everything it offered.

So, over the course of three viewings the HFR effect all but disappeared from my perception. Once I got past the distraction of HFR, the film reverted to a typically cinematic feel (much like 3D stops being noticeable), but with the benefit of some wonderful new contributions. In terms of 3D, nothing comes close to 3D at 48fps. The 3D is brighter, clearer, crisper, invisibler. The colours and textures are visceral and tangible. The screen damn near smells. The experience went from being deeply disrupted by HFR, to being more deeply immersive than the 24fps version. One especially pleasing improvement at 48fps is the clarity of expansive panning shots. What you see of Erebor during the prologue in 48fps versus what you see at 24 is astonishing. At 24fps you get the gist of  the dwarven city, but the sense of infinite depths and space and architecture are just that, more a sense than a clear perception. The stutter in those pans simply blurs the image at 24fps. But at 48fps... oh my... oh my oh me oh my. Your eyes drool with all the detail.

And therein lies the rub. The details. As long as the film feels like a film, and the production quality keeps up, additional details can only add to the experience. Increasing detail has been driving the evolution (and budget) of production design for decades, but a lot of that effort is lost in the haze of 24fps. That's okay; we sense it's presence nonetheless, as do the actors on set. But the ability to see that additional depth of design, be it real or CG sets, costumes, makeup, or New Zealand's scenery, especially on a film with such high production value, results in a deeply immersive experience. I highly and happily recommend seeing these films in HFR multiple times. It doesn't detract from 24fps, and it opens the mind to just what 48fps has to offer.

Now I'm off to a double feature of The Hobbit: An Unexpected Journey and The Hobbit: Desolation Of Smaug, in HFR. It's been a year sine I last watched HFR - I'll report back with my thoughts if there interest.
Tweet Post Submit

More about The Hobbit: The Desolation of Smaug