Review: THE HOBBIT: THE DESOLATION OF SMAUG, A Hell Of A Ride 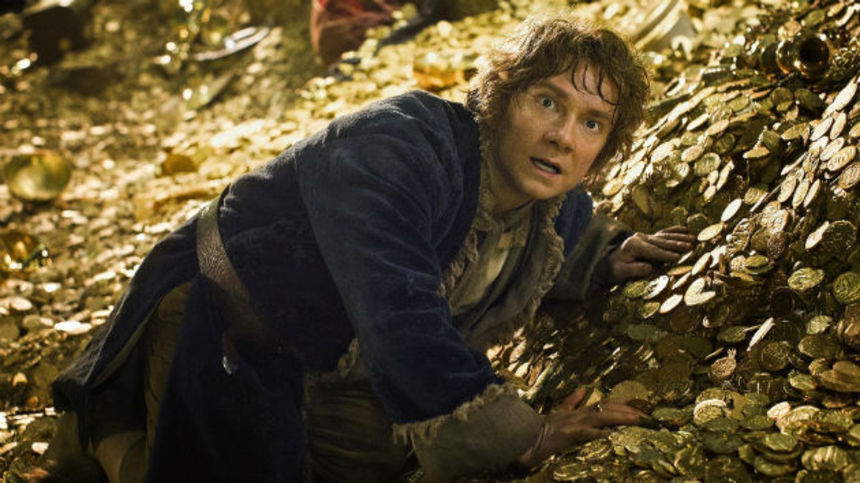 When last year's The Hobbit - An Unexpected Journey hit, I addressed the central question being asked by most fans of the Lord of the Rings films: "How could something so relatively slight, an explicitly childish work that's little more than a richly populated retelling of the Beowulf myth, live up to the scope of the LOTR trilogy?"

I argued that the first Hobbit film did exactly what it needed to do, resetting the stage for another set of films, similar works with obvious echoes but very much their own pieces of the puzzle. This is a mighty journey, so there's bound to be a considerable amount of baggage. For many, the first Hobbit film felt superfluous, and talk of the expansion of the slight novel was dismissed as mere folly or a cash grab on the part of Jackson and company.

For those disposed to this negative sentiment, the fifth film in this series will do little to disabuse you of those notions. For The Hobbit: The Desolation of Smaug is, on first blush, more of the same. We've got more traipsing dwarves, more action sequences, more somber intoning by wizards, and many, many more shots of the seemingly extraterrestrial vistas of New Zealand.

Yet I say this explicitly, not as a fanboy or someone blind to the Jacksonian quirks that some find tedious: if you don't like The Desolation of Smaug, if you're honest you probably didn't like the Lord of the Rings films very much, either. For even more so than the previous outing, this chapter feels very much like a (welcome) expansion on the world that the original trilogy helped create. The Tolkienian landscape is a rich one with many places to explore, and I for one refuse to begrudge these extraordinary filmmakers taking more of my time to delve into the nooks and crannies of this rich narrative.

While the last film opened with a prologue similar to The Fellowship of the Ring, this one opens with a flashback almost similar to the one used in The Return of the King, with a setting that equally reminds very much of Aragorn's introduction to the saga. This brief prologue, along with other elements later in the film, provide direct cues to the greater whole. For some, this may feel derivative, but as anyone who has ever delved into Tolkien's world, these ripples-through-time practically define his master work. It's exactly these connections, through rich genealogies and throwaway lines of inter-connectivity, that hint at the vast constellation of characters and histories that Tolkien reveled in.

This is not to say the film requires one to have read the source material, for this film diverges more sharply from the source material than any of the others in the saga. The most (needlessly) controversial is the fabrication of a character, Tauriel, a representative of the Sylvain elves and one who plays a critical role throughout the film. Capably played by Evangeline Lilly, she represents but one aspect of the way that Jackson and his writers have wrestled the sparse narrative of The Hobbit into something approaching the complexity provided by Tolkien's The Lord of the Rings books. 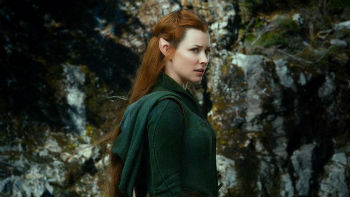 These changes illustrate definitively what sets an exceptional adaptation apart from a mediocre one: a careful balance between the manifest devotion to the source material and the creative freedom to make these very much their own works in a different medium. These films are great not just because of Tolkien's stories, in some fashion they're great despite elements of Tolkien's prose that if simply transcribed into script form would have made the screen versions both pedantic and convoluted.

Thus, we have Legolas running around a world that purists may point out preceded his very creation at the hand of Tolkien, we've got Radagast and Azog, and other elements that were merely hinted at or described in further detail in the Appendices. Once again, it's to the credit of all that none of this feels superfluous or tacked on, but instead does what any prequel should do - provide a buildup for what's to come, while very much existing on its own terms and telling its own story.

Only the most cynical or contrarian of viewers would see that The Desolation of Smaug does anything less.

It helps that this chapter of the story is able to delve right into the narrative - with the first film taking care of all the obligatory introductions, we're free (some would say finally) to march along with our characters as they make their fateful journey. This is the film where some of the more iconic elements of the source book are presented on screen - the barrel ride, the visit to Lake-town, the encounters with Beorn, and the battle of wits with a giant dragon.
All of these elements are ripe for cinematic exploration, and Jackson doesn't disappoint. From the flume-ride soggy fun of the barrel chase to the mine-shaft mayhem in the former kingdom of Erebor, much of the movie plays as a theme-park ride, as action packed as any Indiana Jones film. This makes this in many ways a more fun film, one with some absolutely terrific visual moments the equal of any action-adventure.

There are also some delicious moments of darkness - one of those "extra" scenes is one of the film's finest, and the visually stunning way that Jackson captures this nightmarish encounter between one of our lead characters and a powerful enemy is a thing to behold.

There have been dozens of dragons onscreen, but the long-awaited arrival of Smaug - performed in a particularly effective, sneering basso profondo voce by Benedict Cumberbatch - lives up to even heightened expectations. The animation is extraordinary, and while it won't quite get the plaudits that the (revolutionary) Gollum/Sméagol work did, it's still mindboggling for me to think how in my lifetime I've seen the evolution from ILM's superb go-motion work on Dragonslayer to this latest incarnation of this onscreen beastie. 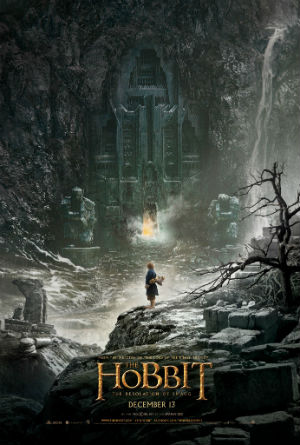 The cast continues to please - Martin Freeman in particular is given more to work with as his character becomes more complicated. There will be plenty more for the likes of Richard Armitage to do in the next installment, but he still provides Thorin with appropriate levels of kingly gravitas. Yet it's Ken Stott's pitch-perfect Balin that again impresses, his contribution easy to overlook, yet perhaps the closest to rivaling the ever astonishing Ian McKellen in terms of exhibiting both grace and intensity when required.

If I'm obliged to pick nits, there are a couple of moments where the film's running time is made a bit more manifest. The sequence with the spiders, while dispatched relatively quickly, still feels a bit too much like other scenes we've seen several times before. Yet other supposedly superfluous elements, such as the further development of the Necromancer character, provides the kind of richness that marks this film as superior to its predecessor. There's a gloom in this chapter, not unlike the dread that befalls Mirkwood, and this makes the tale seem a little bit more ... adult, I guess, at least more consequential.

This is a film that's a better balance between setting a tone and delivering exposition, one where characters are allowed to develop while ginormous action sequences unfold.

Quite simply, The Desolation of Smaug has elements the equal to any part of the previous iterations. In time, the division between the Hobbit films and the LOTR trilogy will be seen as a mere inconvenience of chronology, as the separation is actually far less than even in the original books. These works remain the pinnacle of this type of cinematic epic fantasies, and it is this blend of both comfortable familiarity and outright wonder at the spectacle that makes this film work as well as it does.

For now, however, we have the pleasure of seeing a film of this scope and level of execution show up on our screens in consecutive Decembers. In a sea of comic book adaptations and other extravaganzas that built upon the work that Jackson and others helped contribute, it still remains a particularly satisfying thing to go back to this narrative, with these rich and wonderful characters as they again travel through the paths of Middle Earth. As an audience, we are literally traveling there and back again, and with The Desolation of Smaug, I'd suggest you're in for a hell of a ride.


[For those interested in such things, the press screening for the film was in 3D, non-HFR. The imagery was certainly captivating, but I did find myself wishing for a first time that I'd seen it with the unique visual style presented last time out with 48fps. I will be doing a follow up on the HFR experience when that version screens, for now here's my take from last year on the "unknown journey" surrounding High Frame Rate presentations.]
The Hobbit: The Desolation of Smaug opens in theatres across North America on Friday, December 13.

The Hobbit: The Desolation of Smaug

The Hobbit: An Unexpected Journey

More about The Hobbit: The Desolation of Smaug