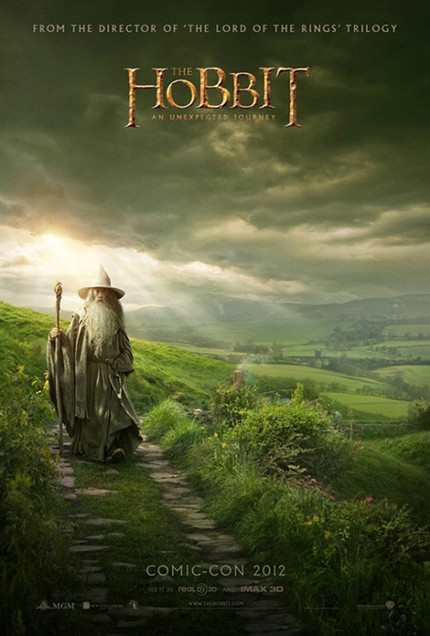 After the seventh or eighth denouement during the conclusion of Return of the King, fans of Peter Jackson's Lord of the Rings trilogy were content to have the director have his own way. The seeming interminability of the thing had been earned, most of us felt, forming a kind of victory lap after having come so far with the project despite such ridiculously long odds. We thought we (and he) were done with Middle Earth, and that PJ had earned his extended goodbye.

Sure, now the success of the entire project seems to have been inevitable, but I assure you that sitting in the theatre a decade or so back for Fellowship of the Ring, I was not alone being filled with dread. How could a work so vast, so convoluted, so epic and entangled possibly be translated to screen without losing its magnificence and its power? Could we lose the asides and the signing, the Bombadils and detailed vagaries of the Tooks, and still get out of the work what fans wanted?

As the curtains parted and the prologue began, I was almost immediately sucked in, my fears put to rest. For with this 10 minute opening prologue, perhaps the best, tightest work of cinema Jackson has ever accomplished, PJ and his collaborators managed to perfectly distill a vast history of Middle Earth, and the role of the ring of power, into a series of exquisite shots. With this beautiful montage, Jackson both sets the scene for his entire trilogy, but also manages to situate the audience, preparing them both narratively and stylistically for what's to come.

Half way through the second part of the trilogy, Jackson and his editors do the same trick again, reminding the audience just where they are, and gently accelerating the story along its way to conclusion. Again we have the mellifluous tones of Blanchett's Galadriel, a menacing, regal purr that's like a voice inside your head.

Following the enormous success of ROTK, we thought he was done, of course. Jokes about The Hobbit were bandied about, and some suggested he next tackle the (ridiculously dense) Silmarillion. A few years back, after Kong and Lovely Bones saw relatively limited success, rumours started circulating about him tackling The Hobbit.

This time, the expectations were a mirror of those for the original films; how could something so relatively slight, an explicitly childish work that's little more than a richly populated retelling of the Beowulf myth, live up to the scope of the LOTR trilogy? After all, we'd seen Ian Holm already in that initial prologue asking what was in his pocket. Aside from this, what possible holes needed to be filled, save as some sort of cash grab?

When it was announced that Guillermo Del Toro was assigned to direct, and PJ was to simply produce, we figured we'd get a very different take indeed. GDT is notoriously effective with using practical effects to achieve his goals, so talk of animatronic Smaugs and Goblin Kings soon filled the Interwebs. Alas, any journey has its challenges, and The Hobbit saga got caught up in its fair share of travails. Delays due to MGM's bankruptcy led to Del Toro leaving the project, while labour disputes and other calamities almost made the production leave its home in New Zealand.

Now, these years later, all this drama is put aside. When you sit down to watch the film, the first images you see are of a very familiar Hobbit hole with a bright green door. Inside is Ian Holm as Bilbo, scratching out his tales of traveling "There and Back Again," replicating the same scene shown from a different angle in the LOTR trilogy. A remarkably ageless Elijah Wood bounds on screen, talking of heading off to the woods to meet Gandalf, a kind of Rashomon-like echo of events captured earlier.

As Holm's voiceover continues, we're thrust again into another epic prologue montage, this time focusing on the events in the Dwarf Kingdom under the Lonely Mountain. Immediately, Jackson and his team situate the film in a far wider, darker space than explored in the original (slight) book. This isn't simply a telling of that relatively straightforward earlier story, this is very much three pieces of the greater whole. The trilogy is now made into six, and we have nothing short here of a direct expansion of the Lord of the Rings tale.

So many elements echo the other films, from Shore's fine score to the smallest details of production design. The world of Tolkien is pretty ageless, so to traffic in these worlds again is a far closer connection to the previous works that most other so-called "prequels". As an audience member, you immediately feel at home, as if no time has past. It is at these moments of intimate connection to the greater whole that the film is most effective.

The biggest change isn't in terms of character or tonality; it's the shift in the capture technology used by the production. Shooting on digital and in 3D is one thing, but the decision to 48 frame HFR will be immediately startling to an uninitiated audience (more on that HERE), and I remain fearful that some will simply not get past how different this makes the moving picture appear. It's not quite a jump from black and white to colour, but it's pretty close, and for those refusing to acclimate to the change in look will find it hard to embrace the world, regardless of how effectively it has been presented on screen.

The main way that Jackson and co. expanded the work was to take elements from the appendices in the LOTR novels, backstories and hints of canonical mythology that, it's said, Tolkien had always planned on incorporating into a re-written version of the Hobbit book. Jackson's vision is very much a Hobbit redux, liberally taking characters from the "main" trilogy and sprinkling them throughout the early book's narrative. This gives ample opportunity for moments of quiet and reflection, but also serves very much as foreshadowing for events already discussed in the earlier works. I'm not entirely sure that this will result in the Hobbit trilogy suddenly being meant to be seen before the other films, but they'll at least dovetail nicely into one another, making for a heck of a marathon opportunity once all the films are completed.

Besides the glaring photographic changes, the rest of the production ties exceptionally well to the other films. While there seems to be a greater reliance on fully CGI-realized settings, there's still the same kind of Tolkien-ian style, helped no doubt by having the majority of the art department return, including conceptual artists John Howe and Alan Lee. In the online production diaries you can see that Howe and Lee are sketching on Wacom digital tablet systems rather than pencil and paper, but this hasn't seemed to result in a "plasticization" of the locales - there's still very much an organic, earthy quality to the film.

The film roughly follows the first third of the book, with a whole lot of additional material jammed in to flesh out the story. We get to see up to the Goblin King escape, including the famed "Riddles in the Dark" sequence, now re-staged with Martin Freeman asking about the contents of his pockets (will Jackson replace him in the Rings prologue in some Blu-ray megaset? Who knows...) Freeman's casting is inspired, he's appropriately flustered when called for, but becomes steely and resolute when the moment arises.

The film also does a pretty remarkable job at offering strong characterization for the many dwarves - sure, some are played as mere background characters, but we do genuinely care about their quest in a way that isn't always the case in tellings of this story. Richard Armitage as Thorin is as regal as Aragorn proved to be, a character of sufficient complexity as to make him interesting.

For those paying attention to such things, we get to see some great character work from Balin (son of Fundin, natch, whose tomb we saw in Moria). Ken Stott's take on the character is far richer than expected, and in a few brief scenes, he crafts quite a nuanced role.

In addition to tying the likes of Balin and riddle games to the previous trilogy, we also have a bunch of lumbering, talking CGI mountain trolls that can be (very) briefly seen in a shot as Frodo and friends clambered towards Weathertop. As if stepping into that earlier scene, we've got the backstory fleshed out, this time with motion captured enhanced creatures. The improvements in "mocap" are pretty impressive, and Gollum is joined by a whole host of different creatures realized using similar techniques. Overall, the effects are quite impressive, and hold up under scrutiny.

If anything, the first Hobbit film has relatively little to do with Hobbits. It's very much a tale of a set of Dwarves, and their desire to once again claim a home. The bittersweet song they sing provides not only one of the film's most colourful moments (and the core of the initial teaser trailer), it's also the theme that runs throughout, playing over the many vistas of rustic New Zealand that once again enthrall.

The short version is this: If you hated the other films, there will be nothing more for you here. You'll find the character tedious, the storyline predictable, the farcical elements too broad and the musical moments appalling. For the many, many fans of the original trilogy, however, you'll find an enormously comfortable setting, one that's easily the equal of the other films in the series.

The three hour running time sounds gratuitous, but it ran by extremely quickly, and there were very few moments where the film even approached dragging. The decision to split into three instead of two seems a wise one, as we're given many detours (including with Radagast the Brown, sure to be a favourite character for a younger audience) that add to the epic nature of the whole, and surely would be the first bits excised to try and trim the project down.

For any Rings nerd, something as simple as a three shot of Saruman, Galadriel and Gandalf will be sure to please immediately. For the casual fan, however, I'd still suggest that there's lots here to love, including a more streamlined narrative than some of the other films in the series. Sure, this is another "schlepp" piece that involves a lot of walking, and there are more than a few Deus Ex Machinas, from eagles to Wizards. Still, if you're willing to settle into the story, to be swept away by its scope and sense of wonder, and to fall for the travails of these characters, I think that you'll find something more satisfying that the usual run of sparkly Vamps, Wizarding adolescents and the heroics of the spandexed.

Only the most churlish fan of the other films will be disappointed with this additional episode to the tale. This is a film that fits as comfortably as Mithril Mail with its companion films, even with its radical departure in terms of photographic technology.

It took many paths to get here, but The Hobbit: An Unexpected Journey lives up to even heightened expectations following its Best Picture-winning sibling. It's a film that feels like it was always meant to exist, living comfortably as part of the greater whole while not coming across as redundant or repetitive. It does what so few sequels/prequels do, making you hungry for the next of the series, while still making you appreciate very much what has come before.

In the end, there's little more than can be asked for from a film of this type. And that, I'd suggest, is more than enough to recommend it for a wide audience.

The Hobbit: An Unexpected Journey