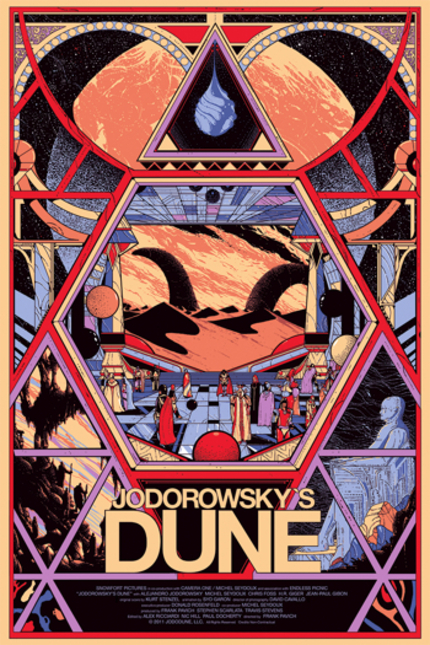 The Fall 2013 edition of Night Visions, Helsinki's horror, fantasy and sci-fi festival that usually runs more than once a year (!), came to a close this past weekend, with Jodorowsky's Dune taking home the audience award.

Other ScreenAnarchy faves to play well at the fest included Israeli serial killer thriller Big Bad Wolves and the film that is being touted as something of a "Dutch Dogtooth" Borgman. Full deets on the fest are below!

The Fall 2013 edition of the oldest horror, fantasy and science fiction film festival in the Nordic region wrapped up on Sunday, November 3, breaking all admissions records.

After having won the audience award at the Fantastic Fest of Austin, Texas in September and at the Sitges Film Festival in Spain mid-October, Frank Pavich's fascinating documentary JODOROWSKY'S DUNE (USA 2013) continues its victorious journey to the Nordic region. The sold-out Nordic premiere screening of this incredible achievement in documentary filmmaking was hosted by the Night Visions International Film Festival in Helsinki, Finland on the evening of Saturday, November 2, 2013. Less than 24 hours later, JODOROWSKY'S DUNE went on to win the Night Visions Audience Award 2013.
This was the first time ever that the Night Visions Audience Award, introduced in 2008 and now given out for the sixth time, was won by a documentary feature. Additionally, the title won the award with an unprecedented average rating of 4.6 out of 5 in the audience vote. The votes were cast on-site at the festival cinemas only by the members of the audience of each screening. A total of 24 feature films, completed in 2012 and 2013 from 11 different countries around the globe, were eligible for the award.

The first runner-up for the award was FILTH (UK 2013), director Jon S. Baird's sharp and edgy adaptation of the Irvine Welsh novel by the same name. The second runner up was the science fiction horror comedy THE WORLD'S END (UK 2013), Edgar Wright's final installment in his, Nick Frost's and Simon Pegg's Cornetto trilogy. Other popular contestants in the audience vote included Alex van Warmerdam's demonic thriller BORGMAN (The Netherlands 2013) and BIG BAD WOLVES (Israel 2013), Aharon Keshales' and Navot Papushado's thrilling follow-up to their audience pleasing debut RABIES.
Arranged from October 30 to November 3, 2013, the Fall 2013 edition of the Night Visions International Film Festival also wrapped up the Finnish film festival year with record breaking audience figures. All the Night Visions events arranged in 2013 have now gathered a total number of almost 14 000 admissions. This is an all time high in the history of the 16-year-old festival.

The next edition of the Night Visions International Film Festival will take place in the city of Helsinki from April 9th to April 13th, 2014.