Review: THE BOOK THIEF, More A Pamphlet Than A Novel 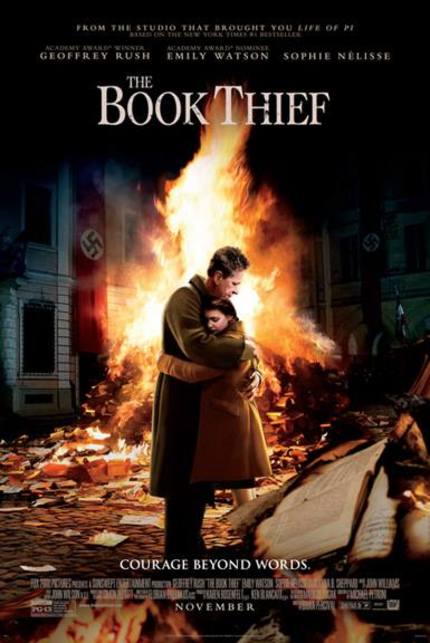 With its rich photography, lush score, and feel-good script with a bite, it's easy to dismiss The Book Thief as an old-fashioned throwback film. So easy, in fact, that that's what I'm about to do.

Based on a much-loved, much book-clubbed novel by Markus Zusak, this is the tale of what the poster describes as "courage beyond words". In fairness to the narrative, the film does start out with appropriate moments of bleakness, as a young girl is given up for adoption to a German couple as the fires of the Third Reich begin to burn in earnest.

Precocious yet effective, young Canadian actress Sophie Nélisse's turn as Liesel provides the core of the narrative, and she does exactly what the script calls for. The same can be said for the extraordinary talent of Geoffrey Rush, and the criminally underappreciated Emily Watson, each providing exactly the level of depth and nuance that the film demands.

Yet there's still a nagging sense about the work, that the dangers aren't ever quite scary enough, that things play out while dancing around the horrors and real venom of those times to make for a far more accessible film. It's as if the story is floating at the level of a fable, a kind of children's version of the events as seen through the eyes of adults.
If it were told with the words of a child (think of the impactful writing of a similarly aged Ms. Frank holed up in Amsterdam during this period), there would be far more bite, far less floating camera and not-too-scary moments when things just about go wrong. It's as if the warmth never truly turns to giddy, or the horror never quite gets to the point of real dread, making for a safe middle ground that lacks the passions of either tonal pole.

By sticking closer to the middle, The Book Thief feels, well, unimportant. Yes, the magical realist narration sets this very much as a kind of storybook tale, but it also makes the stakes just that much more artificial, if not broadly theatrical. John Williams' score is instantly recognizable, and certainly helps give the film an air of being from another, simpler time where there were far fewer films tackling this era to pit this one against.

Still, there are parts to admire, and certainly for some this will be a fine night out at the movies, comforted by the familiar, jolted just enough to feel that they've experienced something rich and powerful. We've got nuclear-grade performers here peddling bicycles, and while they do it with aplomb, I just felt throughout that there was much being wasted in the mighty talents of these performers. Rush in particular is immediately charming, but in turn he becomes one-dimensional. Watson must appear at first a shrew, and while her maternal transition is allowed to play out, it's still not quite satisfying.

Thus, the film leaves us with a film that, while not risible, does not raise to the level of a veritable constellation of other works that have plumbed similar stories. While the film doesn't pretend to be The Pianist, or Schindler's List, or even something as stark as The White Ribbon, that macabre prequel to the Holocaust to come, The Book Thief doesn't even seem to work entirely within its own boundaries.
It's decent without being pleasing, moving without being memorable. It's more a pamphlet than a rich novel, this film in part about reading, and feels overall like a missed opportunity to craft something richer, something more powerful, something, frankly, more in keeping with the gravity of its tale.

More about The Book Thief