A touchstone for modern horror, Brian De Palma's Carrie remains a brutal and brutish look at the ultimate outsider: a teenage girl who can move things with her mind.

Click on the picture in the gallery below to get started. The original trailer -- which misspells King's first name! -- can be found under the final image in the gallery.

70s Rewind is a column about the writer's favorite movie decade. 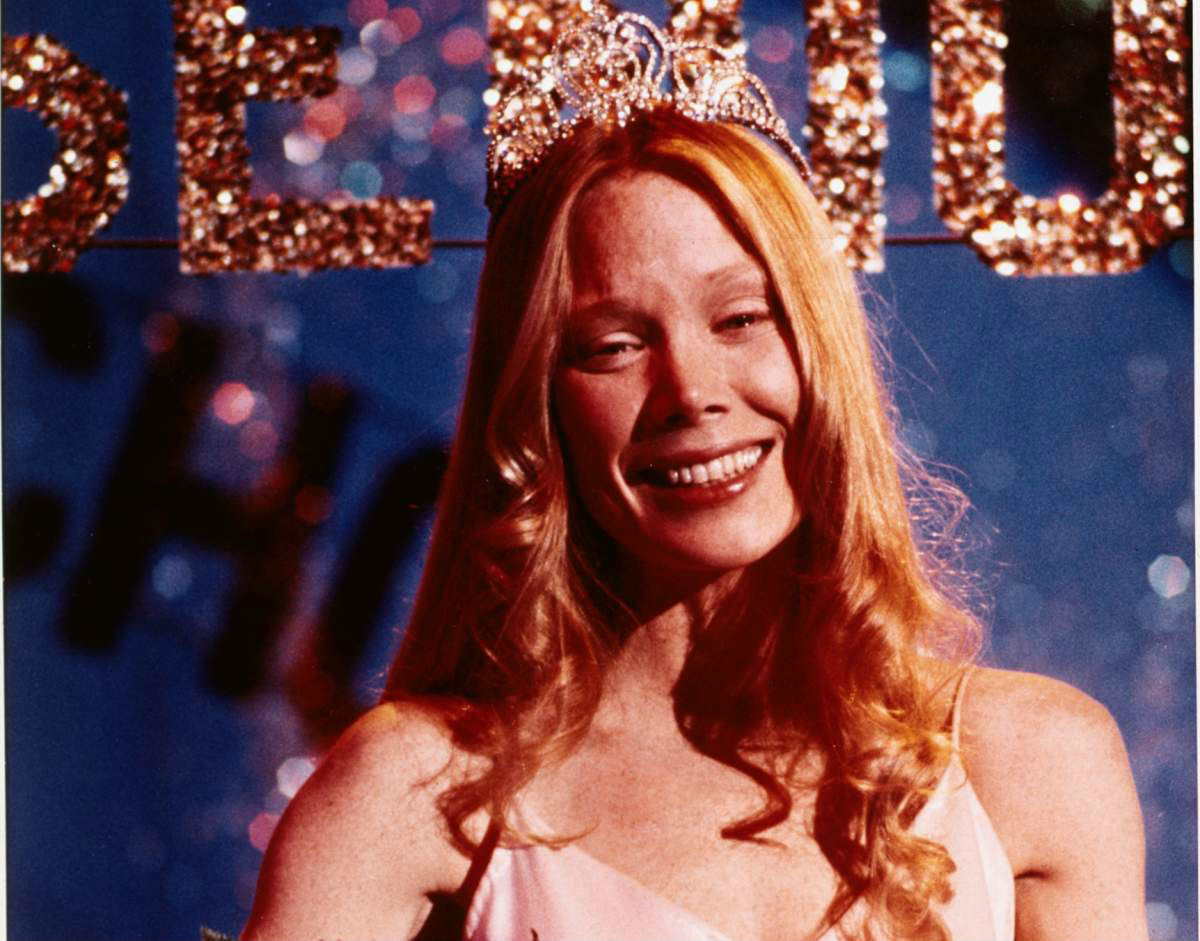 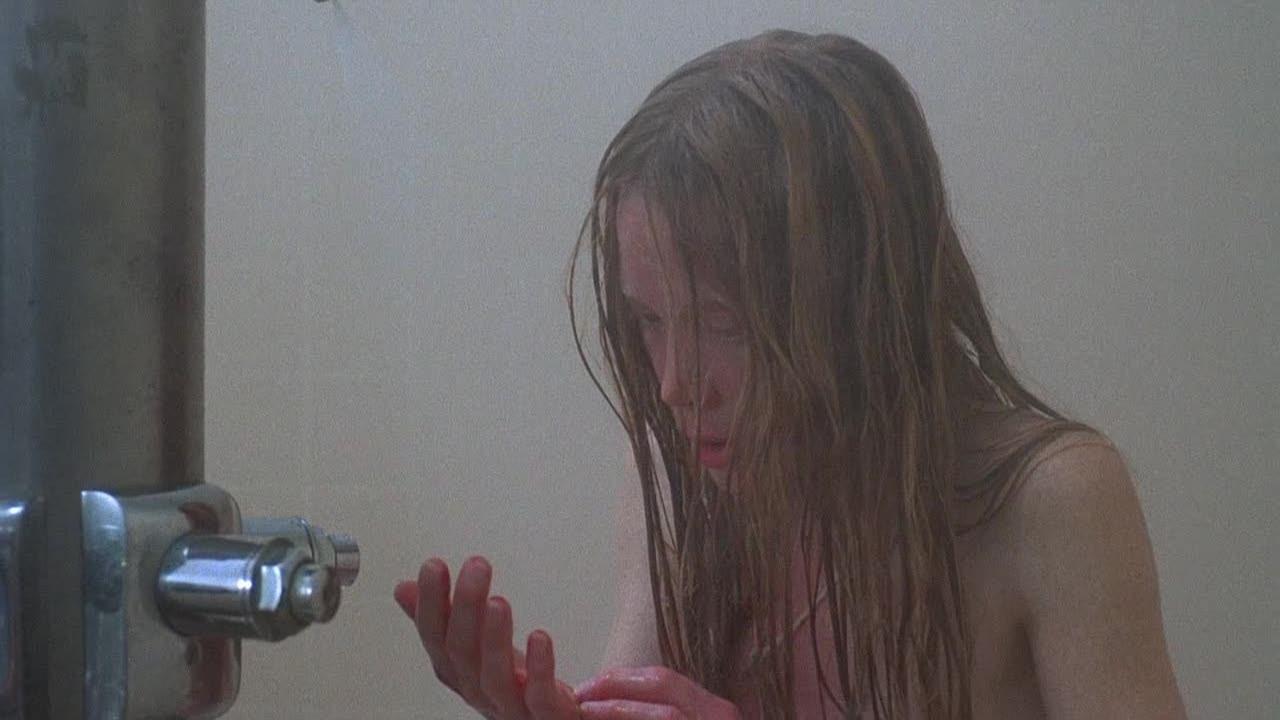 The second scene in the movie has been vilified for its slow-motion display of naked young women. As hard as it is to believe nowadays, however, in the 70s many of us took group showers at school without any clothes on. 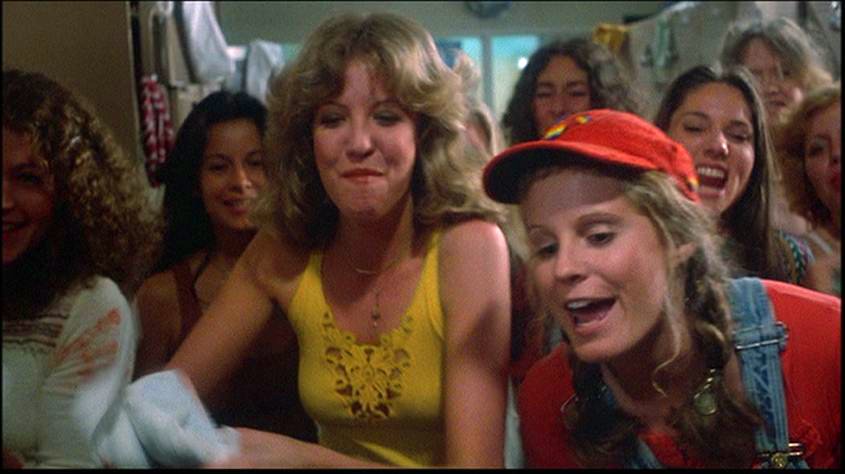 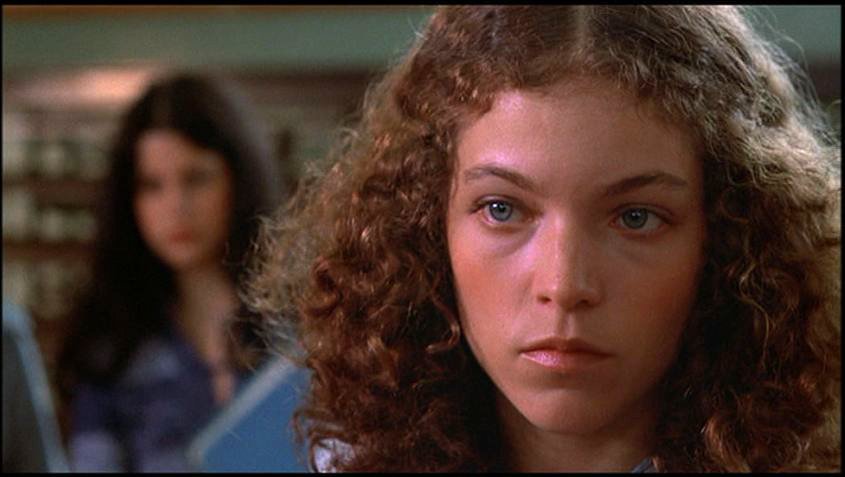 Amy Irving, in a regretful mood for her actions during the shower scene. This was her feature film debut, after multiple appearances on TV shows. Two years later, she reunited with De Palma in The Fury. She is the lone holdover to appear in The Rage: Carrie 2, in which her character has become a school counselor and makes the connection between two troubled girls. 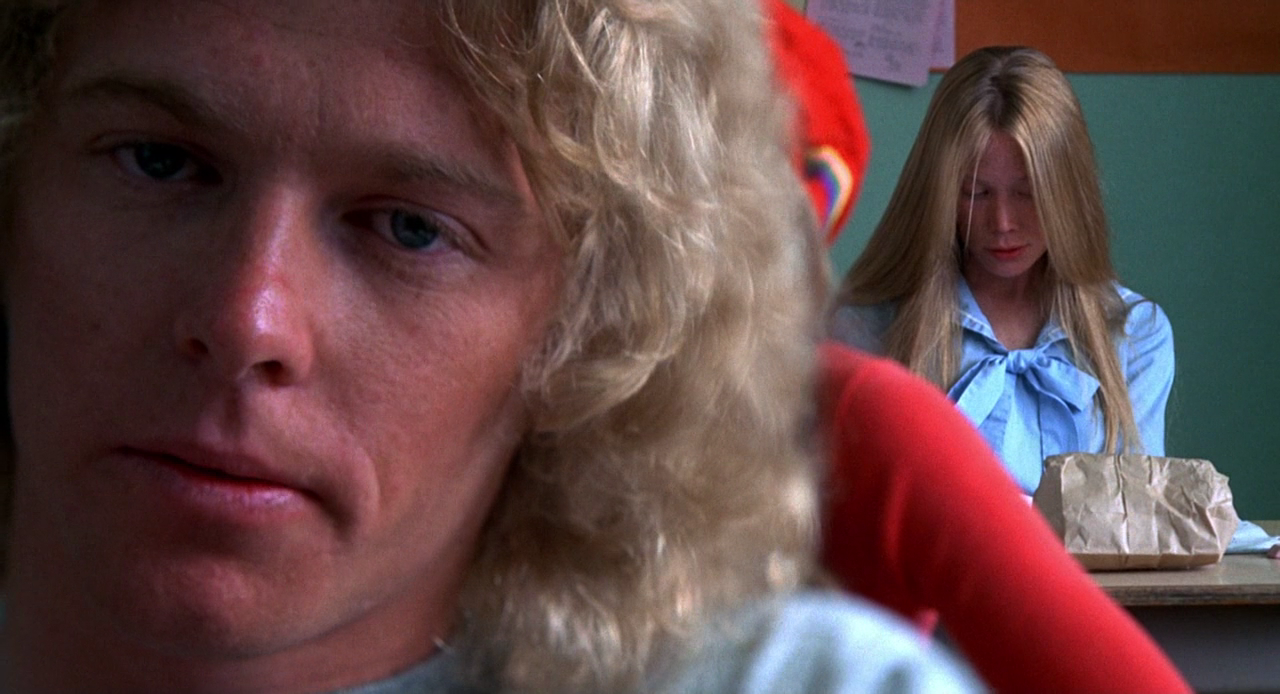 "The best looking boy in the senior class," played by William Katt. He imbued his character with a sympathetic vibe, and his performance led to leads in the romantic First Love and John Milius' surfing epic Big Wednesday. And he gave a winning edge to his role on TV's The Greatest American Hero. 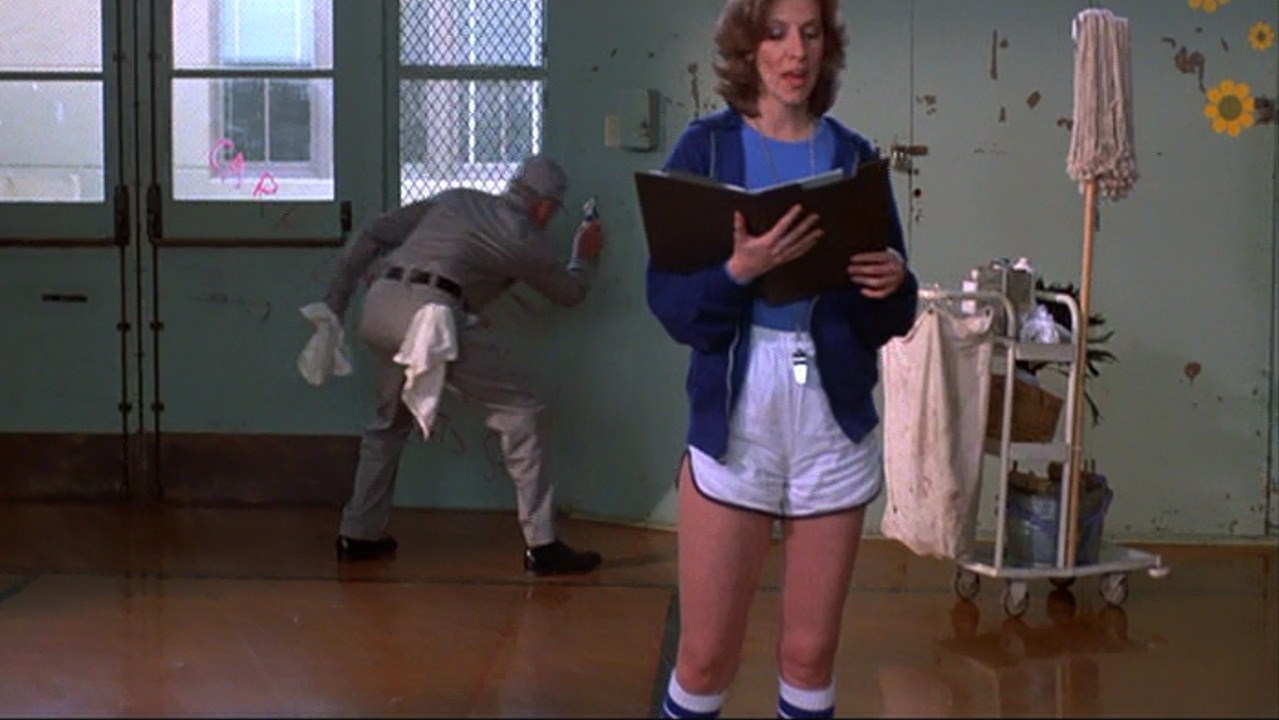 Betty Buckley made a very strong screen debut as a gym teacher who takes a special interest in her telekinetic student. Her portrayal of the firm, at times physically abusive, instructor sends shivers through anyone who attended high school in the 70s and had to deal with a similar type. Buckley became a familiar face in the U.S. via her appearance as a step-mother in TV's Eight is Enough, and later played Margaret, Carrie's mother, in the Broadway musical version of King's novel. 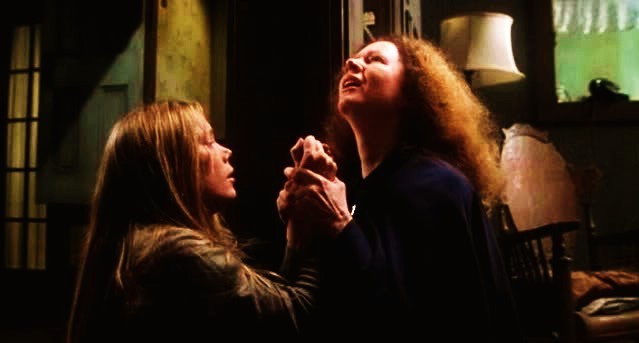 Piper Laurie earned an Academy Award nomination as Best Supporting Actress for her performance as Carrie's religiously devout, mentally unbalanced mother. She was previously Oscar-nominated for The Hustler and later gained another nomination for Children of a Lesser God. She has played many memorable roles, though my favorite remains Catherine Martell in Twin Peaks. 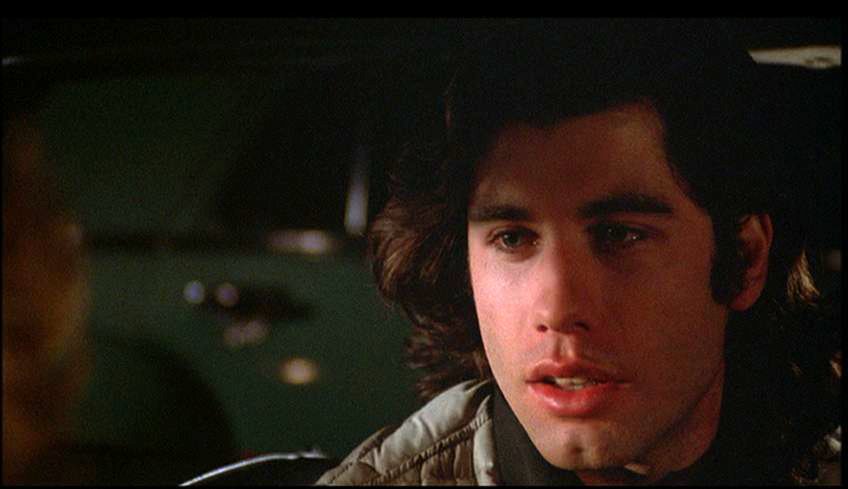 The trailer declares that this film marks John Travolta's film debut, though he'd appeared in The Devil's Rain the year before. But he was rightfully highlighted in the trailer because he had already broken out as a supporting player in TV sitcom Welcome Back, Kotter, which premiered in September 1975. Saturday Night Fever would cement the first stage of his high-wattage stardom a year later, and he reunited with De Palma and Allen for 1981's Blow Out. 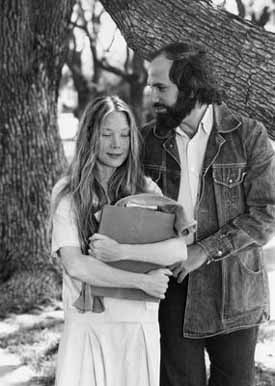 Brian De Palma on set with Sissy Spacek. In his mid 30s, De Palma was on a roll, following up 1973's Sisters with Phantom of the Paradise and then Obsession, which was released just two months before Carrie. A big hit, Carrie led to The Fury, but De Palma soon rebounded with Dressed to Kill and Blow Out. 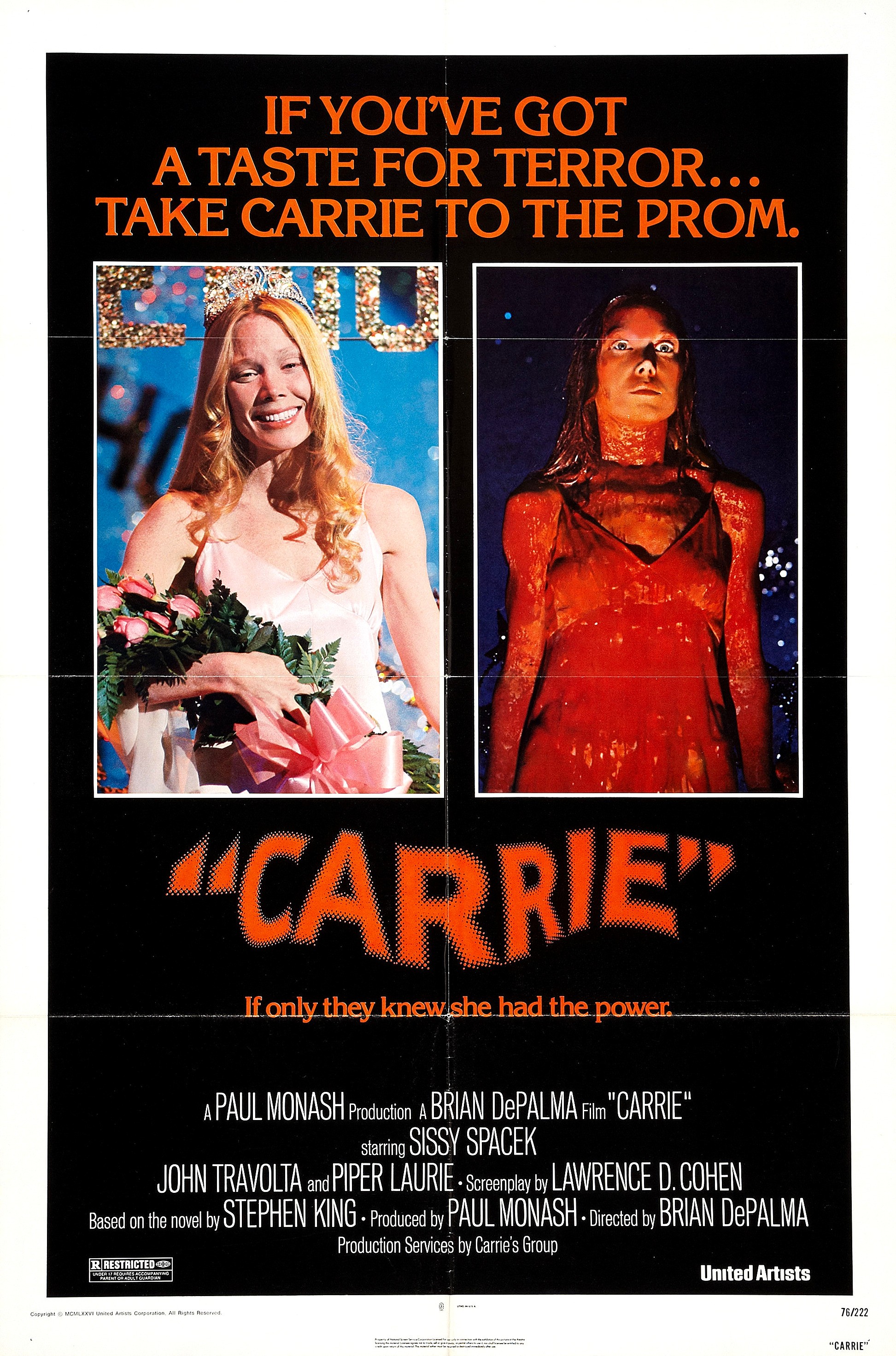 And now we come to the posters. No worries about spoilers; the movie was sold on the bloody prom scene. 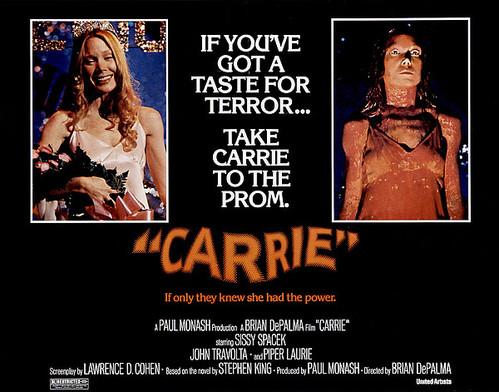 The wavy "Carrie" suggested ... what? Her telekinetic abilities? The eerie mood? At minimum, it suggests something supernatural. 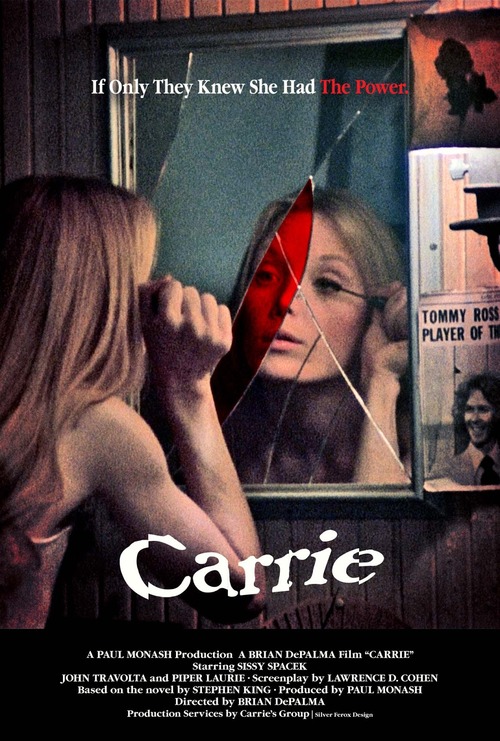 The cracked mirror image does not look like Sissy Spacek, does it? 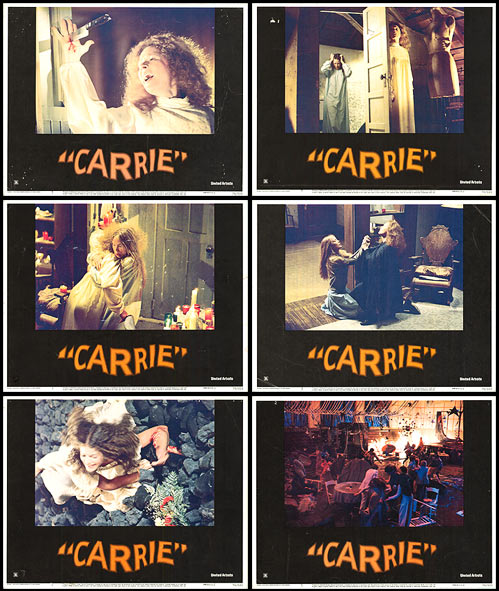 Remember when movie theaters had lobbies? 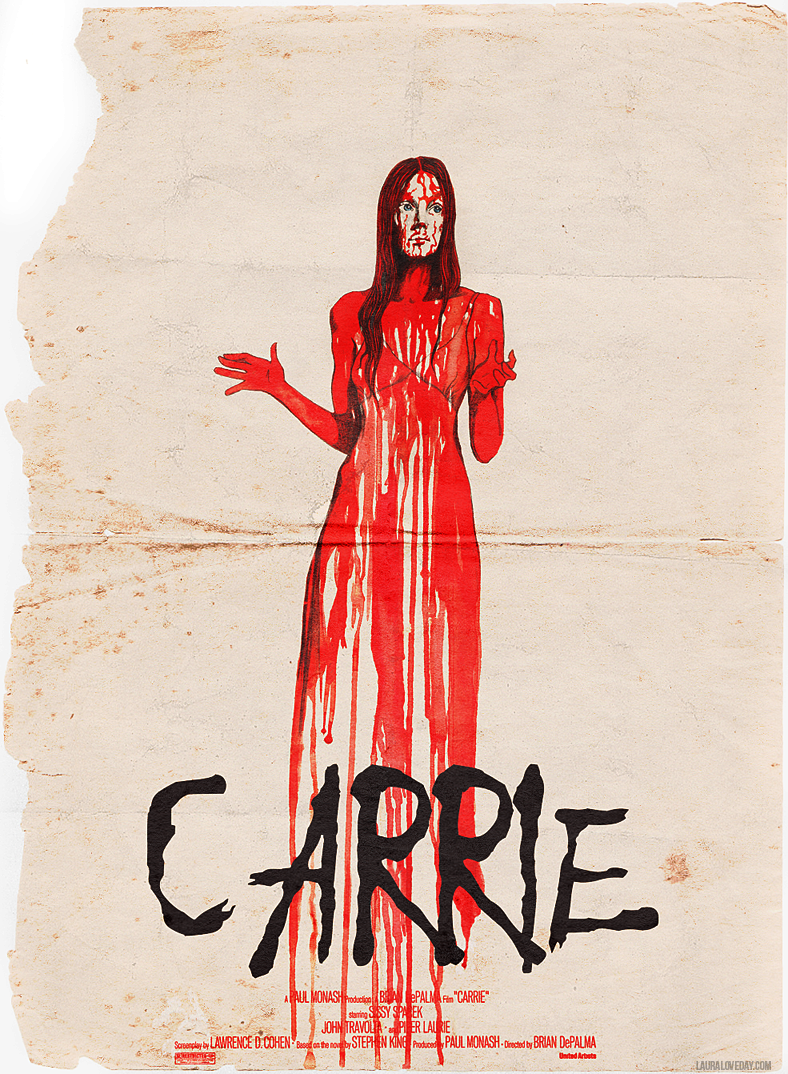 It's all about the blood. 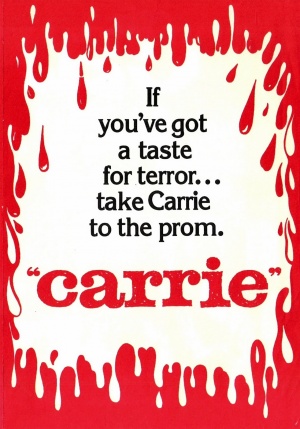 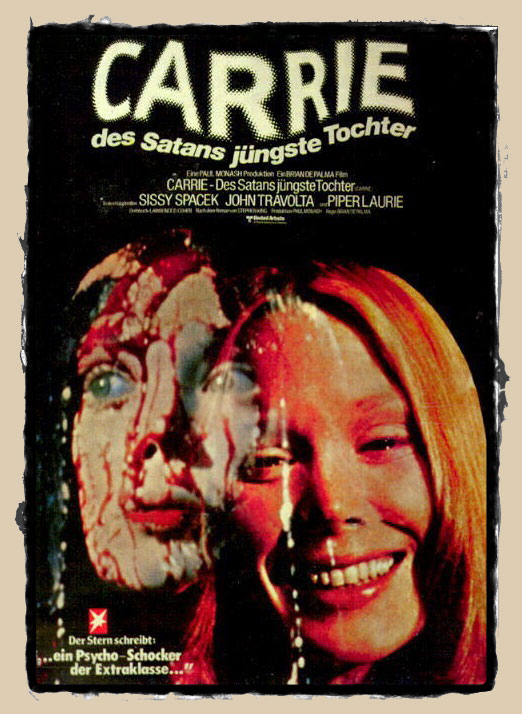 Here the familiar images of Carrie are flipped, with her telekinetic bloody face appearing first. 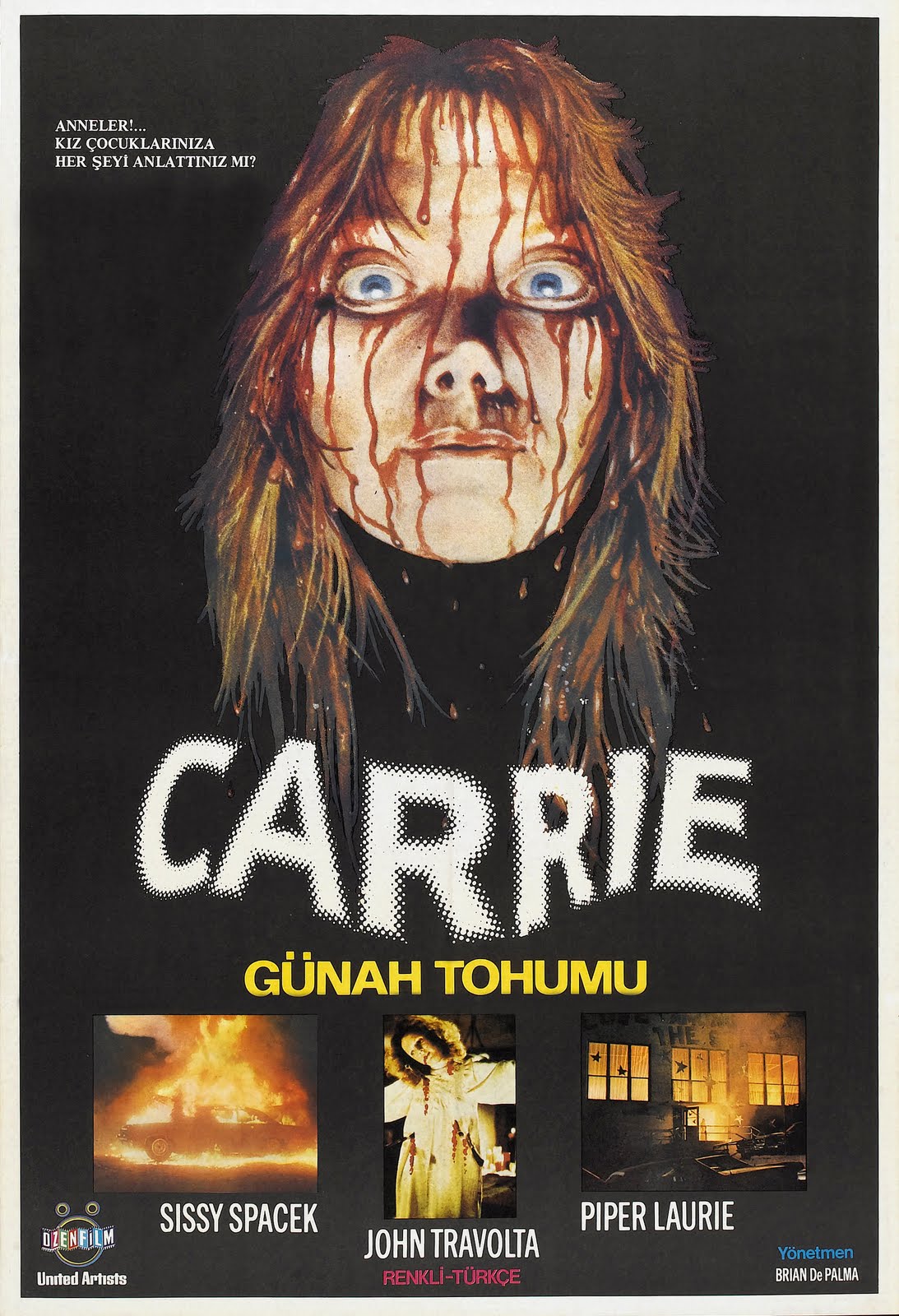 Unnerving to see that disembodied head. 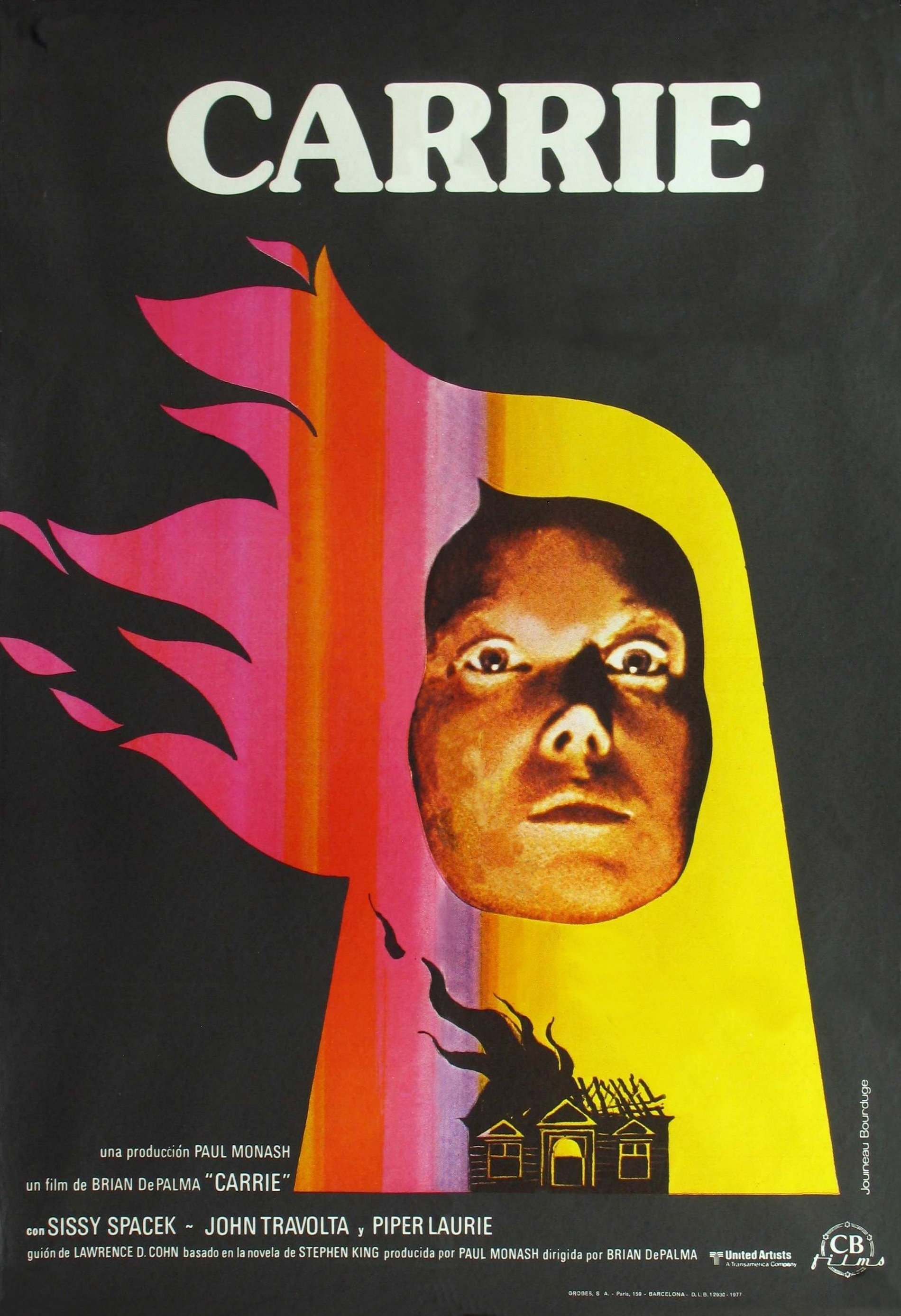 The wavy lettering has been dismissed entirely, in favor of the bold, suggestive colors and stark imagery. 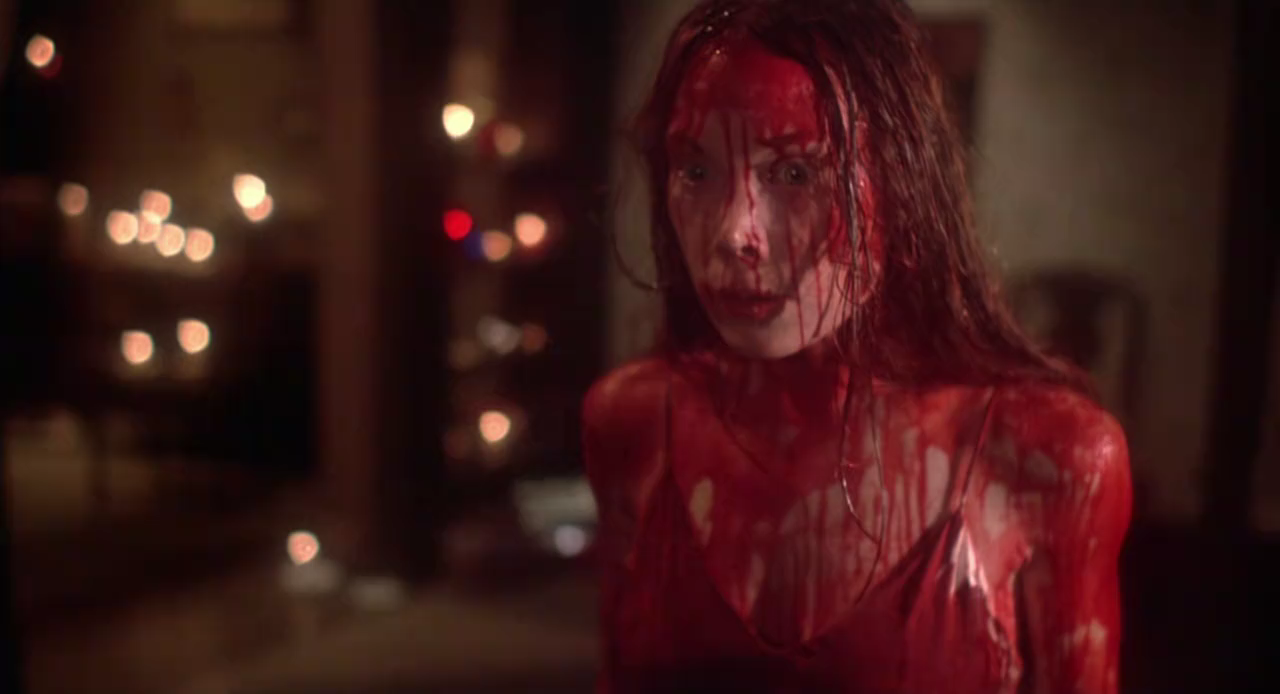 Do you feel this content is inappropriate or infringes upon your rights? Click here to report it, or see our DMCA policy.
70s RewindBrian De PalmaCarriehorrorJohn TravoltaNancy AllenSissy SpacekStephen King