Destroy All Monsters: Carrie, Chloe, and the Terror of a Teenaged Girl 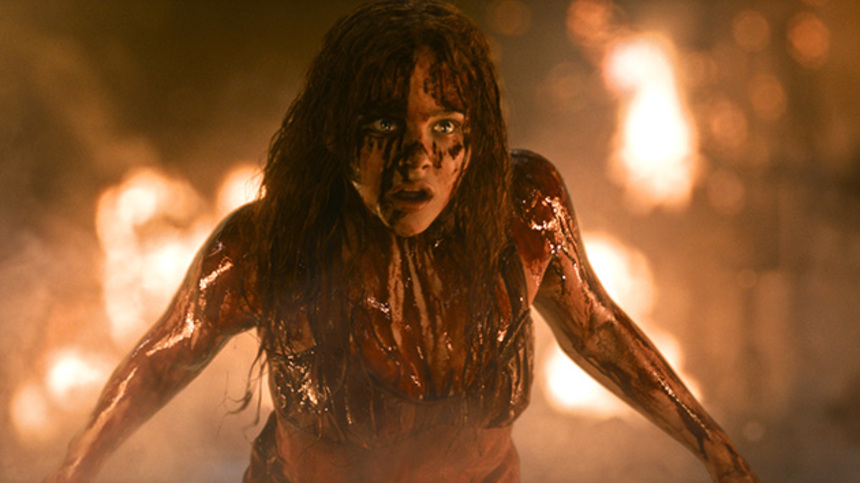 Kimberly Pierce's hapless Carrie remake, starring Chloe Grace Moretz in the title role, didn't quite light the box office on fire over the weekend, failing to plug the gap in the horror movie schedule vacated by Paranormal Activity 5, which moved to next fall. (Read Eric's review of Carrie here.) Carrie '13 is a good example of a remake that nobody asked for - the original Carrie, like The Exorcist, was a product of its time and its unique ability (then) to surprise an audience seeing it for the first time. As the remake proves, if you've seen one shower of pig's blood, you've seen 'em all.

As The Dissolve pointed out, a big problem with Carrie '13 is Carrie herself, and the actress playing her. Chloe Moretz has carved too specific of a niche for herself as an asskicker, as Hit Girl and elsewhere, for anyone to mistake her for the frightened, delicate creature who doesn't even have the wherewithal (at the age of 18, no less, as her headstone eventually makes clear) to have learned about menstruation before she is shrieking and bleeding in the girls' shower. We spend the entire movie waiting for Carrie to do what we naturally expect Moretz to do: go Dark Phoenix on the bullies and rip off some heads.

This is where the intrinsic interest in Carrie '13 lies, just as was the case with Moretz's other major genre remake, Let Me In. The movie on its own terms is one thing, but the movie in comparison to its antecedent is a compelling case study. The gulf between the two Carries tells you everything you need to know about how America feels about teenaged girls, then and now.

Brian De Palma shot Carrie '76 with an almost unrelentingly prurient male gaze, and yet made it in a social climate so much warmer than ours that it easily becomes quietly empowering of its female characters almost in spite of itself. The film's most ludicrous sequence is its first, the shower scene, which De Palma shoots one stop shy of a Skinemax movie, with naked teenaged girls dancing in and out of the shower mist like naiads, while the orchestra swells and breasts jiggle.

Spacek-as-Carrie is so gormlessly innocent in the film's first act that she is given a real position of weakness from which to emerge as a character of greater strength later on. She doesn't understand what's happening to her body, naturally or supernaturally, and the support systems in place - her Bible-thumping mother, her well-meaning (if wholly condescending) gym teacher, even the principal who can't be arsed to remember her name - won't fill in the gaps. (Also: no internet.)

As such, when Carrie does begin to learn about and harness her powers, there is a sense of maturing empowerment that follows her throughout the film until the prom scene. For all the efforts of other characters to push Carrie to the sidelines (a pointed sequence has Ms. Collins talk to Carrie about what she could do to improve her looks, in which De Palma zooms in on Collins to remove Carrie entirely from the picture), the character essentially "wins" the story right up till the pig's blood falls and Tommy gets killed. The following supernatural rage-fit is a derailment of Carrie's progress till now, an explosion of heretofore-unseen anger in the maligned girl.

Carrie '13, on the other hand, is the story of a monster. The monster is, in the current film's presentation, a two-part being - the mother and the daughter as orbiting demi-incarnations of the same dark spirit. The film credibly aligns the two characters in back-to-back opening scenes, where first Margaret (Julianne Moore) and then Carrie (Moretz) are terrified to discover something bloody emerging from their vaginas. For Margaret, it's a profoundly disturbing (if highly improbable) birth sequence wherein she seems unaware that she's pregnant right up till the moment that baby Carrie pokes her head out from underneath Margaret's skirt; for Carrie, it's a reiteration of the famous shower sequence, although - this being 2013 - the new version has all the hippie-dippy nudity and sensuality removed.

Carrie and Margaret, chimaera-like, are presented throughout the film through funhouse reflections and refractions of their faces; Margaret is shown arriving at school through a mullioned window, her head bulging and warping like a barely-contained demon, whereas Carrie uses her newfound telekinetic prowess to shatter, and reassemble, the mirror in the girls' bathroom, half-portions of her face staring back at her as she manipulates the shards with her mind.

Carrie's maturation in Carrie '13, and by extension all sexual maturation, is shown as something not to be trusted - at least for girls. (The film is mum on boys' pubescence.) Aside from one cutesy scene where Carrie experiments with her body in her bedroom until her mother "catches" her (levitation substituting for masturbation, of course), the evolution into adulthood for the three lead female teens is fraught with dark meaning. Chris Hargensen is shown nearly being mounted on her boyfriend's car under Carrie's watchful, envious gaze; Sue Snell has car sex with Tommy early in the film and is pregnant with the dead boy's child by the end (a reinstatement from the novel); and Carrie, after a few accidental pops in the first fifteen minutes, is fully in control of - and exploiting - her powers by the end of the first act. (Because there's internet this time, I guess.)

Which brings me back to our lead actress. Chloe Moretz is a clever actress, and built her early career on that precognitive, wise-beyond-her-years cleverness, to great effect in (500) Days of Summer, Kick-Ass and Let Me In. I'm not arguing that casting her as Carrie was necessarily a mistake - if you're going to remake that movie in this day and age, Moretz is pretty much the only actress in her age range who would even enter into the conversation - but the role argues against the wobbly step in Moretz's recent onscreen persona, which has persisted since her breakout year, 2010.

Moretz's persona has been built on a kind of transgressive interest which has carried suspiciously seedy undertones and motivations. Under her "best kid sister in the world" sweetness (which was, to be fair, perfectly utilized in Martin Scorsese's Hugo to exactly that effect), there is the suggestion of a willingness to push, and cross, boundaries. In (500) Days of Summer, she's the (literal) kid sister who's significantly more adult than her adult brother, who she calls a pussy; in Kick-Ass, of course, she graduates to calling people cunts, before murdering them - and all of this before Moretz was 11, the shock and strength of both roles drawing directly from the lines they crossed for her age.

The most disturbing entry in her filmography is the execrable Hick, a wrongfooted bildungsroman in which Moretz plays a 13-year-old southern girl who runs away from home and gets embroiled in a sexual universe entirely beyond her maturity level. The "lesson" in her coming of age finally is finally delivered when she is pursued into a cornfield by the film's romantic lead, a man twice her age, who rapes her, all in a movie that is presented with the happy-go-lucky tonal charm of a Spielberg movie. It is a profoundly ugly work. With Hick, the identifiable spark of Moretz's stardom began to extend naturally towards a collision with the uncomfortable reality of America's pop-cultural relationship with a teen girl's body, with violently unpleasant results.

Carrie seems to be a further extension of that, where precocious naughtiness is all well and good in the pre-sexual sphere, but as soon as there are boobs and menstrual blood involved, that same power must be chastened by the severest possible means. Carrie in the prom sequence of Carrie '13 is not an innocent girl undergoing a psychic freak-out; she's a fully-birthed demon emerging from her chrysalis, raining down hellfire on a whole community of mortals. The "Bloody Carrie" look this time is so artfully designed that it suggests it's a supervillain costume rather than the result of an equation involving pig's blood, gravity, and a pink dress; this Carrie can even fly, hovering like a wraith over the mayhem on the dancefloor.

At no point in the film, however, is it suggested that this grand finale could have been averted. Carrie '13 is a tragedy, in that its lead character is unmercifully headed towards this end from her very first scene - all for the "sin" of arriving at her womanhood, or perhaps, being born in the first place. Chloe Moretz and Carrie White seem united by film's end, standing in the bloody rubble of the conventions of the American teenaged girl - and demonized, wholeheartedly, for having somehow gotten herself there in the first place.