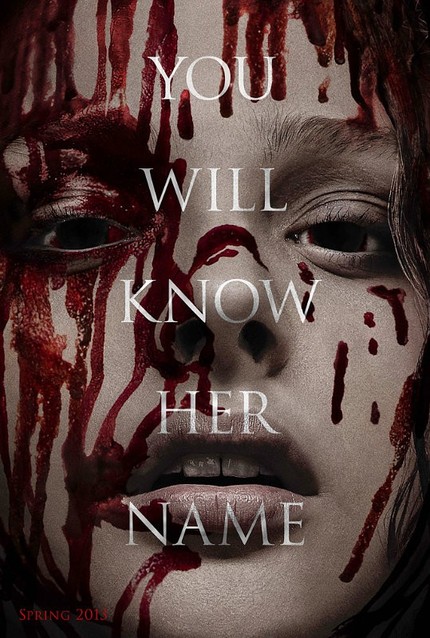 It's been 37 years since Brian De Palma turned Stephen King's first published novel, Carrie, into a bloody camp classic, more than enough time for the idea of a remake to become palatable (not to mention financially appealing). And its central elements -- high school bullying, religious fundamentalism, teen sexuality -- are timeless. If anything, the story is more chilling now than it was in 1976, when the idea of a student exacting lethal revenge on cruel classmates was almost unheard of in real life.

The remake, directed by Kimberly Peirce (Boys Don't Cry), does modernize a few plot details; for example, thanks to smart phones, bullying is now a multi-media experience. But overall it's astonishingly faithful to the original, with similar dialogue and almost identical story beats. The screenplay is credited to Lawrence D. Cohen, who wrote De Palma's version, and Roberto Aguirre-Sacasa, who's a writer/producer for Glee, which seems appropriate. It's as if Peirce's intention wasn't to re-imagine King's novel but to emulate De Palma's movie.

Curiously, the result isn't wholly derivative. Peirce isn't luridly insane like De Palma, for one thing, instead bringing a matter-of-fact, down-to-earth approach to the material that serves it well. The story is more coherent, the characters more clearly drawn. Intentionally or not (that's the eternal question), some of the more outlandish parts of De Palma's nutty vision inspire laughter. Not so with Peirce. Her Carrie isn't a "scary" movie, exactly (neither was De Palma's), but its last 30 minutes or so are intense, horrific, and captivating. A few hiccups aside, the whole enterprise works really well.

Carrie White (Chloe Grace Moretz) is a naive and sheltered high school senior whose wingnut Christian fundamentalist mother (Julianne Moore), always quoting the Bible (or making stuff up) and berating her, has raised her in such a way as to ensure her ostracism among her peers. Mom also neglected to tell Carrie that menstruation was a thing, so the poor girl is terrified when she starts bleeding in the locker room shower one afternoon. Her classmates, led by chief mean girl Chris Hargensen (Portia Doubleday), savagely mock her hysterical overreaction. Being teased is nothing new for her, but this is especially cruel.

Something that is new for Carrie, though, is her previously unknown ability to move things with her mind. The telekinesis manifests itself during the shower incident, and it starts Carrie down a new path of self-empowerment. Overall, it's a pretty big day for Carrie.

In administering punishment for their cruelty, the gym teacher, Ms. Desjardin (Judy Greer), tells the girls something that encapsulates the story's essence: "I want you to think long and hard about what it would be like to be Carrie White." That's what bullying is: a failure of empathy. (In the novel, Carrie isn't just telekinetic, she's telepathic -- the supernatural version of empathy.) One girl, Sue Snell (Gabriella Wilde), feels guilty for taking part in the abuse, and as penance asks her dreamy boyfriend (Ansel Elgort) to take Carrie to the prom, to at last help her feel included. Meanwhile, Chris wants revenge on Carrie for spoiling her fun, because Chris is awful and deserves whatever happens to her.

Chloe Grace Moretz, previously seen killing oodles of people in the Kick-Ass movies and Let Me In, doesn't lack commitment, but she's not cut out for the role of the mousiest, most timid girl in school. It's not just that we associate Moretz with more headstrong characters. She seems to have a natural self-assurance, an inherent boldness, that she can't suppress. It's telling that she does her best work in the final third of the movie, when she and Carrie are both unleashed.

On the other hand, Julianne Moore is marvelously unhinged as Mrs. White, bringing new dimension to the demented, self-harming mother. The movie's one significant deviation from the 1976 version (I won't spoil it for you) places greater emphasis on Mrs. White's history, and it's in the very first scene. It made me hopeful that we were in for a truly new interpretation of the story. Alas, this was not to be. But what we did get is a bloody, compelling teen horror flick that, remake or not, outclasses plenty of its peers.
Tweet Post Submit