TIFF 2013 Review: PRISONERS Is a Tense Thriller With a Few Nagging Problems 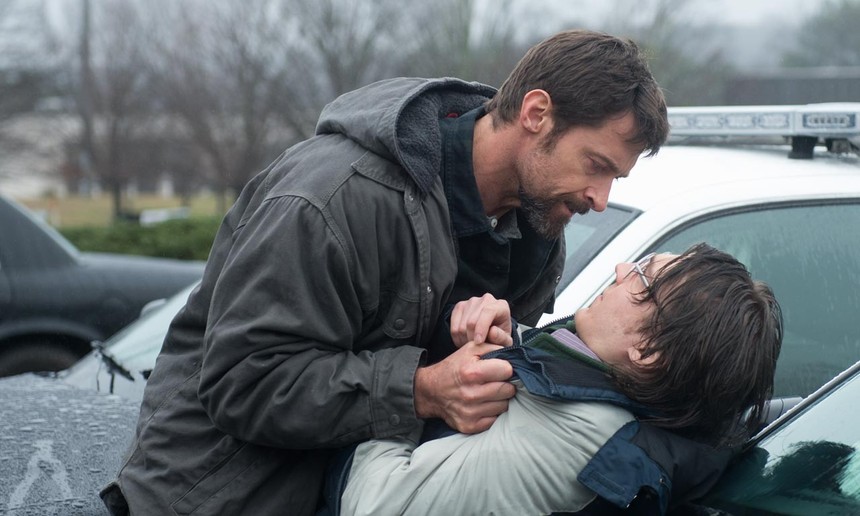 Call me contradictory, but I never quite understood the fuss made of Denis Villeneuve's 2011 Best Foreign Language Feature Oscar-nominated Incendies. While I was impressed by the filmmaking, I had some serious issues with the story that left me unable to fully recommend it. However, I seemed to be mostly alone in that opinion. So perhaps I shouldn't be all that surprised that while Villeneuve's latest film Prisoners has been winning critical acclaim, I am again confronted with too many nagging story issues to give it a pass. This is obviously a mature, finely acted, and well executed thriller, but a few fundamental problems keep it from really succeeding.

The story of Prisoners revolves around the disappearance of two young girls and the different ways in which the two families deal with the tragedy. One of the fathers, Keller Dover, is played by Hugh Jackman. Terrence Howard plays Dover's neighbor Franklin Birch -- the father of the other missing girl. Friends before the abduction, Birch preaches calm in the face of Dover's rage, but is eventually swayed towards vigilantism by Dover.

Jake Gyllenhaal play Detective Loki, the youthful hot shot cop who has solved every case he's been assigned. Dover and Loki butt heads from the beginning when Loki is forced to release the initial suspect, a mentally challenged man named Alex Jones (Paul Dano). While Detective Loki is busy following new leads, Dover takes the case into his own hands and abducts Jones, convincing Birch to help him extract the truth that Dover is convinced the awkward kid knows.

This is an extremely complex plot that, perhaps surprisingly, does not suffer from over complication. In fact, that may be the least of its issues. The problem is that the way in which the information is revealed, it is all just a bit too obvious. As the pieces of the puzzle clicked together in my head, I couldn't help but think to myself that Loki must not be all that clever of a detective if he isn't able to connect these dots. I was hoping for a twist to catch me off guard, but one by one, the dominoes fell exactly as I expected.

None of this is to say that Prisoners isn't a tense and well-made thriller. The performances are strong, world vividly portrayed, and the music adds much to the tense mood. Melissa Leo, Maria Bello, and Viola Davis round out the impressive cast and each is given moments to shine. But just like Incendies, numerous small issues add up to a package that is just too hard to fully get behind.

Do you feel this content is inappropriate or infringes upon your rights? Click here to report it, or see our DMCA policy.
Denis VilleneuveHugh JackmanJake GyllenhaalTIFFToronto