Jackman And Gyllenhaal Drive The New Trailer For Villeneuve's PRISONERS 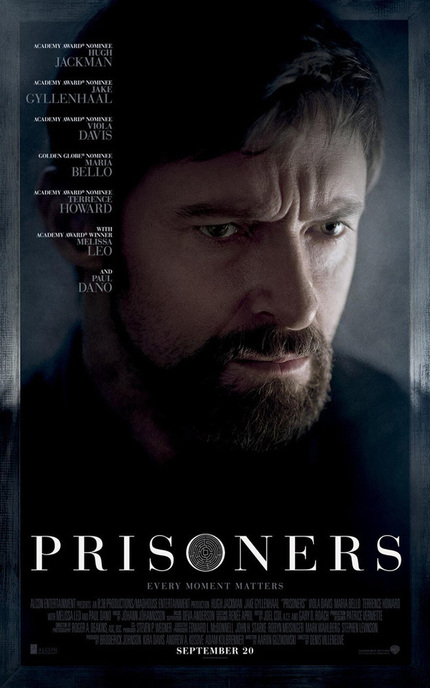 With mass attention wrapped up in Hugh Jackman's upcoming go around as everybody's favorite stabby mutant it's been easy to overlook the fact that the Australian actor has another movie coming likely to prove rather more substantial. Jackman takes the lead in Denis Villeneuve's Prisoners, a kidnap thriller that also stars Jake Gyllenhall, Maria Bello, Viola Davis and Terrence Howard.

Keller Dover is facing every parent's worst nightmare. His 6-year-old daughter and her young friend are missing, and as minutes turn to hours, panic sets in. The only lead is a dilapidated RV that had been parked on their street. Heading the investigation, Detective Loki arrests its driver, but a lack of evidence forces the only suspect's release. Knowing his child's life is at stake, the frantic Dover decides he has no choice but to take matters into his own hands. The desperate father will do whatever it takes to find the girls, but in doing so, may lose himself, begging the question: When do you cross the line between seeking justice and becoming a vigilante?

With a September release date looming a second trailer and new poster have just arrived for what promises to be a taught thriller. Check it out below.

Do you feel this content is inappropriate or infringes upon your rights? Click here to report it, or see our DMCA policy.
denis villeneuvehugh jackmanjake gyllenhaalmaria belloprisonersterrence howardtrailerviola davis