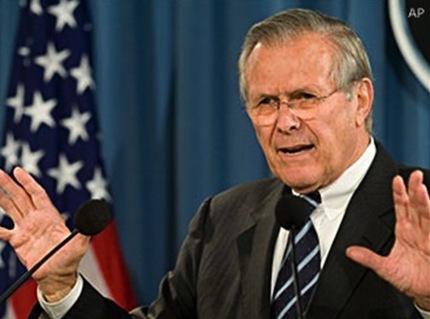 One of my most anticipated titles at TIFF, Errol Morris' documentary interview with Donald Rumsfeld called The Unknown Known now has a very effective teaser.

A sort of follow up to Morris' Fog Of War - the Oscar winning documentary on Robert McNamara, another US Secretary of State - and appearing as slickly edited and scored as always, the trailer establishes the setting of the two Gulf Wars and Saddam Hussein's position of power, before highlighting the twin constants of Morris' filmmaking: obsession and nuance. Rumsfeld actually calls the filmmaker out on a possible obsession with capturing Rumsfeld's obsession, while also declaring, "I'm cool and measured."

Do you feel this content is inappropriate or infringes upon your rights? Click here to report it, or see our DMCA policy.
DocumentaryDonald RumsfeldErrol Morristeaserthe unknown knownBiographyHistory

More about The Unknown Known