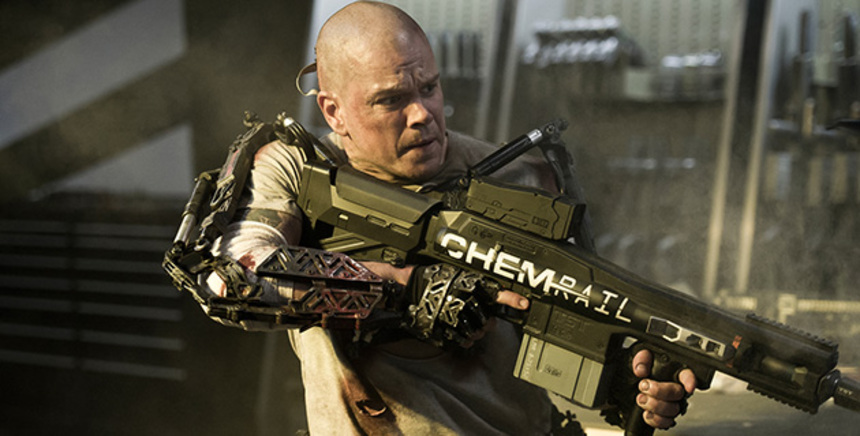 After storming onto the scene with District 9, made on the fly after a much-publicized aborted attempt to film Halo, Neill Blomkamp immediately established himself as a sci-fi director contending with the big guys. While not everyone loved his overtly metaphoric take on a famous Apartheid-era incident, I found the film to be both visually impressive and thoroughly enjoyable from both a story and performance standpoint.

Blomkamp arrives with Elysium, his slightly delayed foray into big budget, big studio extravagance. Some of what made his earlier film enjoyable makes the transition well, some gets lost in translation, but overall we have a satisfying, if not particularly revelatory, addition to this year's slate of summer sci-fi fun.

From the sweeping opening shots, the film looks quite extraordinary. Crumbly buildings litter a spent earth, while the space station "Elysium" hovers in near orbit, reflected as a kind of new moon in the daytime sky seen from the planet below. The round, spoke-wheeled station bespeaks Kubrick's 2001 as we see shuttle craft emerging from the axis, gliding down to visit the wretched that live only to serve those who live in luxury above.

The film centers around the exploits of Matt Damon, who gives his all in a performance that frankly reminded me of the type of thing that would have been given to Bruce Willis during the 90s. There is a touch of Terry Gilliam in the film, at least in terms of the low-level paranoia, the use of many ducts, and the type of anti-establishment, overtly political statements being made within the context of a genre picture. 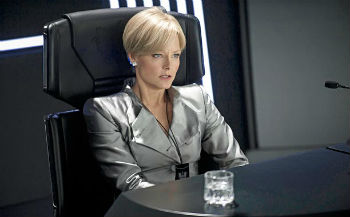 Some of the arch performances from the baddies don't play so well. I'm frankly at a loss for recalling when Jodie Foster really could carry herself on screen, and her most recent takes, going back to the particularly egregious The Brave One, are making me forget it's not that long ago that she was extraordinary in something as recent as David Fincher's Panic Room. Still, her clenched teeth performance is meant to be a bit over-the-top, so while it's distracting, it's hardly the only issue with the picture.

Yes, Sharlto Copley has a very different role to play that allows for a bigger presence, but you only need look to him to find a performer who's more fully committed to his role than Foster. One of the highlights of District 9, Copley's character brings a bit of the Mad Max madness to this film, cutting through some of the more somber (and, more frustratingly, saccharine) elements of the story line. A slew of other human characters, including the ever pointy and sallow William Fichtner, play their parts with enthusiasm.

From a production point of view, there's a bunch of deft touches, from the Bugatti Veyron-ian spaceship that serves as Fichtner's ride, to the well-designed robocops that litter the story. Blomkamp's background in 3D visual effects serves him well, with the integration between the CGI elements and the organic bits pulled off effectively.

In other words, the ingredients are all here - a big canvas, some grand ideas about inequity, justice, an a paucity of resources being exploited by a privileged elite. Yet in the end these grand ideas are no more than a gaudy collection of intellectual set dressing, more distracting than genuinely intriguing. Whether it's the process of being churned through committee, or simply a result of a meager storyline being stretched too far, this smartening-up of this kind of tale actually becomes more frustrating than many of those that eschew such themes for mere spectacle (see: Pacific Rim) or simply borrow from a myriad of other, superior films to make grand references instead of grand proclamations (see: Oblivion).

When we are presented with such an overtly political narrative, we're made to look closer at some of the elements within the story, and quickly find things to nitpick the life out of the film. The entire society of Elysium seems to consist entirely of empty mansions and a few select hallways, where political arguments are made in hallways right out of the Cloud City set from Empire Strikes Back. It seems that the entire political system of us-vs-them is not the result of a scarcity of resources, or blind hubris, but on a genuine, malevolent disdain, an attitude that's simply stated as fact rather than developed. No evil is done without some form of ideology behind it, and we're simply made to take as fact that in this tale rich=bad and the poor will one day rise to claim their rightful equity within society.

The last moments of the film are particularly appalling, where slow motion shots of running children play like some mid-afternoon charity drive. The narrative holes become bigger and bigger as the film runs along, and the grand sacrifices are made in ways that are telegraphed from about a minute into the film. Worse, needless flashbacks and beat-on-the-head metaphors truly make the entire exercise feel needlessly polemical.

By opening up this box of sophisticated, though provoking sci-fi, Elysium's script demonstrates over and over that it's simply not able to live up to its myriad of premises. It's a smart enough script to dance around the issues, but not smart enough to know when to dial things back, when to trade subtlety for extravagance, or vice versa. Even the "save the sick child" card is played to try and draw some audience response, as if simply rescuing the entire populace of a planet from curable maladies wasn't enough of a reason for self-sacrifice. I kind of dreaded the fact that the last minute "hacking" of the systems felt more like an Emmerich film (cue Will Smith and his programming prowess!) rather than something that should be taken seriously.

These (many) annoyances aside, there are still many things that will appeal, including a delightfully morbid facial reconstruction. Still, even the action sequences in those many, many hallways are often a mass of motion blur and quick cuts, never firmly establishing the sense of movement. When the final "boss battle" takes place on one of those catwalks that seem built for just such a cathartic battle, it all feels more than a bit tired.
*** End Spoilers *** 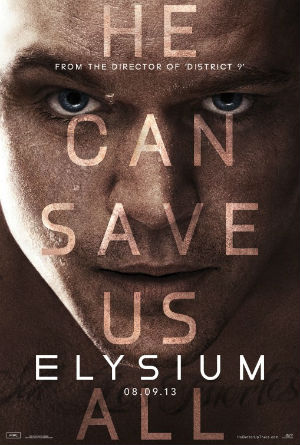 We're sure to see much more world building from Blomkamp, and it's clear that he's both extremely talented and extremely ambitious. What's frustrating with Elysium is that this ambition seems to have overreached the burdens of its story. The fancy visuals and sci-fi tropes can't make up for the fact that fundamentally the film doesn't even rise to the philosophical sophistication of a Pixar flick. If my snarky "Wall•Eysium" dig cuts too deep, it's only out of frustration for so solidly taking the middle road. Once again, we can look to Gilliam's 12 Monkeys and Brazil, two films that built worlds effectively, told overtly political stories, but did so within a greater context that manged the alchemy of both being intellectually rich and also narratively cathartic.

Elysium, alas, cannot pull off this magic without faltering. We can applaud the attempt, be swayed by a summer film that at least attempts to do something new, original, and without requiring massive destruction and the feats of supermen, but that would ignore the fact that this does, in fact, very much trade in those stereotypical elements.
After all, when men don exo-suits in order to beat each other up with aplomb, we're really yet again in superhero territory, and in this context it feels even more hackneyed. By this point, we've really delved quite far away from what at its core must have been at some stage a truly interesting, if not groundbreaking story.
The films opens wide in theatres across North America on Friday, August 9.
Tweet Post Submit

Do you feel this content is inappropriate or infringes upon your rights? Click here to report it, or see our DMCA policy.
ElysiumJodie FosterMatt DamonNiell BlomkampScience FictionSharlto Copley