Review: PACIFIC RIM, Monsters And Robots In A Near Perfect Spectacle 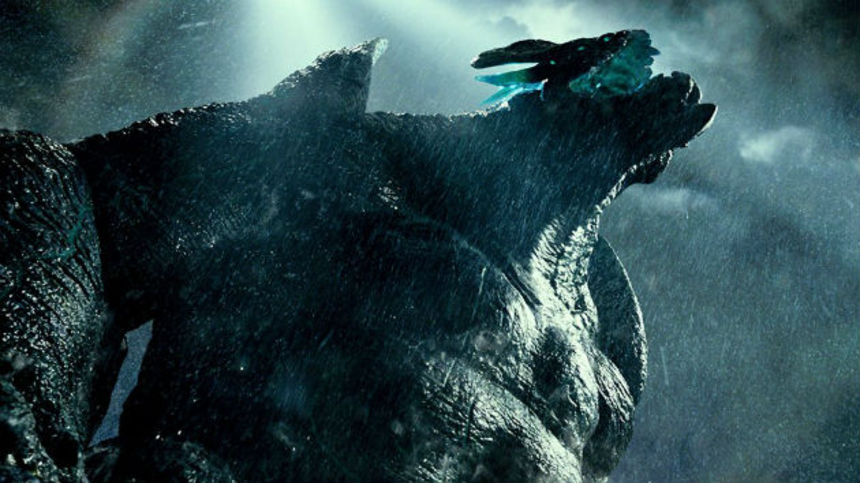 In stark, white text against a black background, the film spells out the core elements contained within. Kaiju, 怪獣, Japanese word for "strange beast", the trans-dimensional monsters that emerge from a "throat" in the depths of the Pacific Ocean. Jaeger, from the German word for "hunter", referring to giant, anthropomorphized mechanical devices built to combat the extraterrestrial threat.

Monsters. Robots. Two iconic adolescent elements beating the living shit out of one another. The rest is set dressing, for, at its core, we've got Kaiju vs. Jaeger, beasts versus mechanical brawn. This is toys-in-the-sandbox filmmaking, picking up the elements from youth and smashing them against each other. It's not subtle, and despite setting some of the action at the bottom of an ocean, it's not even particularly deep. Pacific Rim is, however, deeply cathartic, free from winking cheekiness or overt irony. This isn't a metaphor for global warming or the cold war, it's not a call for racial harmony or some subtle nod to world events. These are humans in giant robot devices forced to combat a series of escalating beasties intent on our complete destruction.

And because of this simplicity of purpose and elegance of execution, it's all kind of marvelous.

This is what happens when you give a visionary director who is fully in touch with his inner child an impossibly huge budget and practically free rein to do what he wishes. This is one of those excellent dream projects for a fanboy: What would happen if you give the earnings of a small city state to a visionary director to tell a story the way he wishes it told? The trailers make you think Michael Bay, but this film is in some ways far simpler, and in turn far more elegant in its execution. There's a laser-like purpose to the film, a seriousness that never drops into being sacrosanct or self-parodic. This is a film made by someone who takes monsters-vs-robots with appropriate levels of both awareness and awe, and has us share in this refreshingly un-cynical, and thus much more timeless, action adventure. This is Guillermo del Toro at his giddiest.

Free from overt reference, neither a comic book nor an explicit nod to innumerable films of the 50s and 60s (yet spawned by nearly all of them), Pacific Rim is both refreshingly new and comfortably familiar The film is also appropriately epic; there's an enormity to the film that's at times simply jaw-dropping. The "used universe" aesthetic that I first saw articulated with Star Wars is here on full display, no surprise given the extraordinary work done by John Knoll and the rest of the George Lucas-bred ILM team. This is a world of rivets and sparking welding devices, scratched metal and loads of preposterously massive doors. There's a heft to the crunching metal and bone that makes things feel, at times, enormous. Coupled with some excellent set pieces that hearken back to submarine bunkers, del Toro makes the events seem purposefully global.

The fact that any of this is believable is a result of the commitment from all aboard. On its surface, the "synchronized swimming" nature of the twin pilots of the Jaeger pilots should be a bit more awkward. Only in the light of day did I worry about the intense pressures exhibited upon fighting at the bottom of the ocean, wondering how certain devices would withstand the enormous pressures. Nobody in their right mind will take seriously a "science of Pacific Rim" presentation, for unlike other works that drape science or politics as a way of giving the sense of sophistication, del Toro and his team are wise enough to leave the film free from such distractions. This doesn't make the film anti-intellectual; it instead frees it up to be in some ways a work of greater purity, a focus of purpose that doesn't need to pepper half-baked ideas in order to seem more than it really is. This is escapism of the finest order, and if you embrace the work as such, you'll be in for a hell of a ride.

The cast, mostly drawn from various television projects, is up to the task at maintaining this tone throughout. I've adored Idris Elba for years, and he brings his intensity to the screen that in the trailers reeks of something overwrought, but in the context of the film is actually quite variegated. Every time I thought the scientist duo of Charlie Day and Burn Gorman was about to go off the rails into farce, I was reminded of the innumerable "scientists" that littered every B-movie, and found the ways they became integrated into the story increasingly plausible, once I let down my guard. The same can be said for Charlie "Yes he shows his abs" Hunnam, who does a plausible job as the troubled lead, along with Kikuchi Rinko (Oscar nominated for Babel) who injects some authentic Japanese wide-eyed elements into the film. Plus, of course, there's Ron Perlman, del Toro's lucky charm, more than living up to the bigger-than-life roles we've come to expect from him.

None of these are star-making turns, for the actors' roles are very much part of the main story. This is not a slight against the film at all, for the spectacle is (unapologetically) the core of the work. The performances help us care about the stakes, but the film unfolds for the most part in the smashing of metallic fists into the faces of giant beasts. Emotional flashbacks and general pettiness and masculine competitiveness are dressing for the core smash-em-up. The emotions exhibited are no more sophisticated than they need to be, fitting perfectly with the general tone of the film.

In the end, an audience may not be ready for something that lacks either irony or jingoism, a straight-up action film that calls upon the simplicity of childhood play. We've been conditioned to accept the trappings of the adult world in our adolescent fantasies, these elements rarely amount to anything more than silly contemporary witticisms ("whoops, my bad") or fortune cookie-level philosophizing (*with great power comes great responsibility"). Pacific Rim is at its best when we see fantastic fighting machines lumbering through the ocean waves, off to punch an enormous screeching beast atop the noggin. It's a film that doesn't need to be ironic or self-effacing to be terrifically effective. It's a film that needs, and provides in ways no film ever has, the spectacle of monsters battling giant robots.

On that level, as a spectacle free from dogma or expectation, reveling in the simplicity of purpose and beauty of the execution, Pacific Rim is near perfect.

Do you feel this content is inappropriate or infringes upon your rights? Click here to report it, or see our DMCA policy.
Guillermo Del ToroKaijuPacific Rim