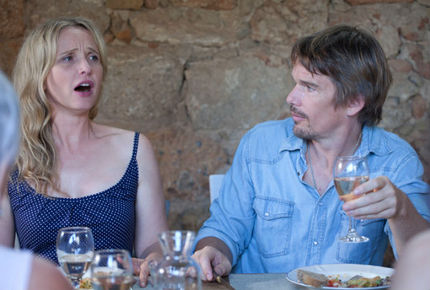 Everybody is praising Before Midnight, Richard Linklater's third film about the love between Celine (Julie Delpy) and Jesse (Ethan Hawke). Nine years after the second installment, Before Sunset, this new chapter first premiered at Sundance 2013 and was released theatrically in the US on May 24.

Considering I watched both "Sunrise" and "Sunset" on DVD, the fact that the company Diamond Films is taking the risk to go theatrical in Mexico with Before Midnight is definitely an exciting situation. Ryland Aldrich reviewed the film at Sundance and had this warning to share:

"Not every movie needs its audience to know nothing about the plot or story going in. We live in a world of trailers and Twitter and even spoilers from Lego toys. But the plain fact is, you will enjoy the third installment of Richard Linklater's 'Before...' series, Before Midnight, more if you know nothing. The knowledge that nine years have passed in the lives of Ethan Hawke's Jesse and Julie Delpy's Celine is all you need."

Before Midnight opens in Mexico City this Friday, August 2. You can watch the trailer below with Spanish subtitles!