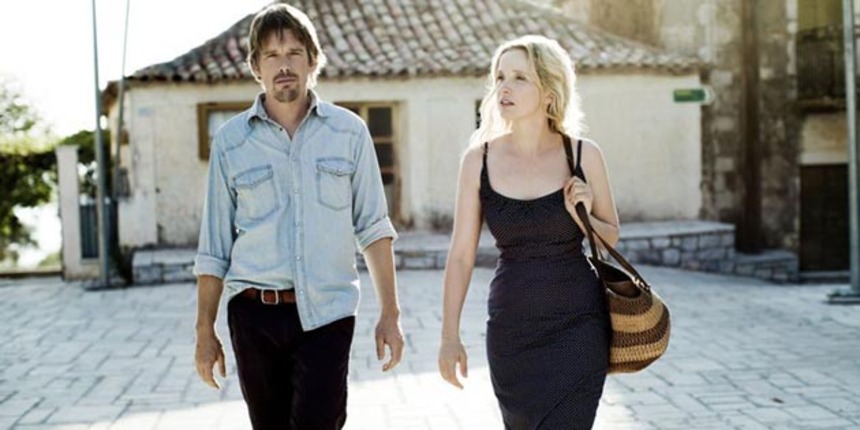 Not every movie needs its audience to know nothing about the plot or story going in. We live in a world of trailers and twitter and even spoilers from Lego toys. But the plain fact is, you will enjoy the third installment of Richard Linklater's 'Before...' series, Before Midnight, more if you know nothing. The knowledge that nine years have passed in the lives of Ethan Hawke's Jesse and Julie Delpy's Celine is all you need. Therefore, many of the details revealed here, while not spoilers in the traditional review context, could lessen the wonderful revelatory impact the film delivers. Consider yourself warned.

Before Midnight opens as Jesse says goodbye to his 14-year-old son Hank at a Greek regional airport. It doesn't take long to learn that Jesse didn't leave Celine's apartment that night and the nine years between have been spent in a mostly happy relationship together in Paris. The unmarried couple have a set of beautiful twin girls and the whole family has just spent the last weeks of Hank's summer vacation in an idyllic Greek resort town.

Just like every summer, Hank's departure is the catalyst for a melancholic Jesse to question his decision to live so far from his son (a messy divorce from his ex means there's no hope of Hank moving in with Celine and him in Paris). Celine sees this conversation coming like a herd of buffalo and shuts him down right away, declaring any discussion of moving to Chicago as the beginning of the end for the Celine and Jesse story. We've seen this side of Celine before -- and apparently Jesse has seen a whole lot of it in the past nine years.

While both Before Sunrise and Before Sunset were about falling in love, Before Midnight is fundamentally different. This is a story about staying in love. Therefore, the film flirts with a bit darker territory. Inherently, a film about a couple of some years will be more about interpersonal conflict than the personal conflicts the first two chapters explored.

Delpy and Hawke so embody their characters that it's almost impossible not to believe they've been living their lives as Celine and Jesse since we last saw them. Their arguments and discussions ring true not just from the dialog of friends and lovers, but from specific dialog of this particular pair of friends and lovers who have spent these last years evolving together. It's a remarkable accomplishment, and quite frankly, a sign of brilliant craftsmanship by the principals involved.

Greece plays the backdrop, but like Vienna and Paris before, it's little more than pretty scenery. There is less walking and talking though one long enjoyable pull through the village is reminiscent of the first two films. There is also more interaction with other characters and a dinner party scene serves as an opportunity for both exposition and to see Jesse and Celine bandy their wit with others.

There is absolutely nothing not to love about Before Midnight. Anyone who enjoyed the other films will relish the opportunity to catch up with these two wonderfully interesting characters. It's a joy to be in their presence, even when they're at each other's' throats. The only disappointing part of the film is that it has to end. It's going to be a long nine years until we get to check back in with these two again.

Do you feel this content is inappropriate or infringes upon your rights? Click here to report it, or see our DMCA policy.
Ethan HawkeIndieJulie DelpyRichard LinklaterSundance 2013

I can't wait to see this. I love the BEFORE... movies more than breathing.

I love the BEFORE... movies too. Makes every other romantic movie feel manipulative.

Before Sunrise was one of the most romantic films ever.