Review: FRUITVALE STATION, For Anyone Who Believes In Love And Community 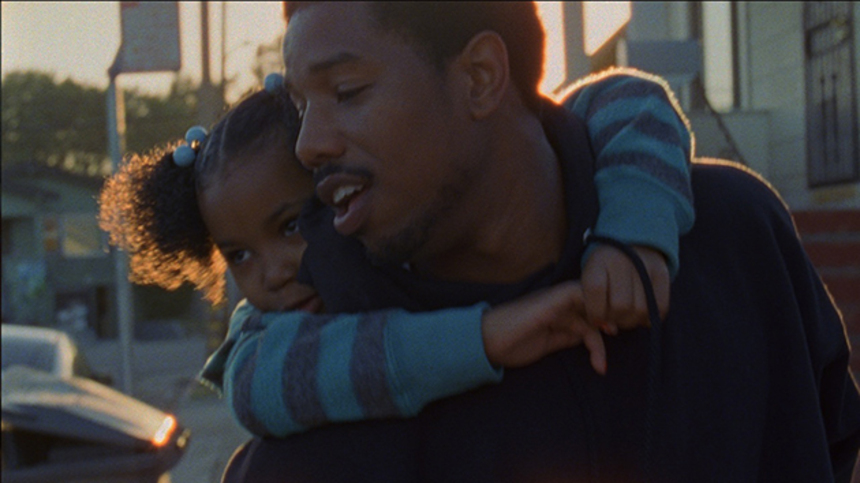 When I first heard that a film based on the shooting of Fruitvale, California resident Oscar Grant had been made, it set off an explosion of hopes and concerns for me. You see, I have a very close connection with the East Oakland neighborhood, having grown up there myself, kicking around those streets from my pre-teen years into my early 20's. Was this going to be an angry diatribe against The Man (in this case, a team of BART police, BART being the Bay Area Rapid Transit, our version of the subway), and a one dimensional rendering of "Da' Hood" like so many other films have been?

Taking place on the last day of 2008, Oscar is struggling to keep his life together, as he attempts to get his supermarket job back after being fired for tardiness, scrambles to get supplies for his mother's birthday that evening, and struggles to find a sitter for Tatiana so he can take his lady Sophina out for a New Years Eve celebration. Money is tight, and rent is due, but rather than go back to selling weed, Oscar decides to dump the ounce he is holding into the bay instead of chancing a bust, returning to jail, and not being there to be a father to his child. This is a young man who seems to be committed to doing things right and not repeating past mistakes. As Oscar tells Sophina in a confessional moment, "I'm tired. I can't do it anymore."

Anyone who has ever been poor, and lived in an area where you can make your way doing some shady shit, is going to know exactly where Oscar's head is at here. Anyone who hasn't? Director Coogler and his lead will indeed take you there. There are not a lot of ways out of the socioeconomic confines of the hood, and it's wearing beyond words. The mere act of truly deciding to start the ascension out of that type of situation is in itself an act of Herculean proportions.

Small moments of Oscar's quiet heroism and determined optimism pop up throughout Fruitvale Station, from when he calls his Grandma Bonnie to when he instructs a young white woman on how to properly do a fish fry, or when he pulls a dog hit by a car from the street and attempts to comfort it as it dies, ultimately being forced to leave it where it lays. The moments we share with him as he plays with his daughter, confides in his girlfriend, or protects his mother from racial slurs help to fully define Oscar.

It being about the subject it is, I don't think I'm spoiling anything by saying the film ends in tragedy, it's spelled out from the cellphone footage that opens Fruitvale Station. Returning home from partying in The City -- that's San Francisco, people! -- Oscar ends up in an altercation with someone from his past, and fate is not kind. That said, the earlier scenes with him, Sophina, and his friends getting on BART to head to S.F. rang so damned true to me as a longtime resident I almost started bawling in the theater. When everyone is still in transit and it's about to hit midnight, somebody busts out an iPod and another dude busts out some speakers and an impromptu dance party breaks out on the train, as the ghostly lights of the trans-bay tunnel magically whiz by, people get down in the aisles, sharing their booze and blunts, as 2009 approaches, minutes away.

One thing about living in the bay, and in particular, neighborhoods like Fruitvale that are so often glossed over in films, is the multicultural environment, which is incredibly large and diverse. An Aztec mural splashes across the outside wall of a Southern style soul food joint. A group of Cambodian hip-hop fans crowd the taco wagon, ordering up carnitas and menudo. A white dude leafs through boxes outside the long-standing, neighborhood record shop looking for Ray Charles vinyl. Teenagers mill around the alternative study center they attend, even on a Saturday, to play Foosball, or work on a project. This is the stuff you see in areas like Fruitvale, more than thugs balling out sacks of drugs, or bums beating each other down for that last swig of T-Bird. They are communities that many times are islands unto themselves, and very easy to feel intensely connected to once you've established yourself and become part of their flow, their "body" if you will. Director Coogler nails the hell out of this.

The two small critiques I have of Fruitvale Station would be the opening in which the words "Hayward, California" splash across the screen, which may lead viewers to think Fruitvale is in Hayward. It's not. It's, again, an East Oakland neighborhood, and the place I claim as home. Bay Area residents can tell you, they are two completely different worlds.

Also, having had my own run in's with both Oakland Police and BART cops, I can say firsthand there are major differences in those two branches of gun toting thugs (oops did I say that out loud?...if the shoes fit while kicking people in the face they must be worn). While there is more transparency to the corruption rampant in the Oakland PD, where good cops are shot by bad cops, and the old vigilante team known as The Night Riders, were straight out of the old Dirty Harry flick Magnum Force, the BART cops are an entirely different creature. Part man-in-blue (or woman), part security guard, their standards and procedures have been known to be even more shadowy, and if you are brought down by one it's been my experience you don't have the recourse you do with a regular police officer. There are also holding cells inside BART stations (which have been denied as to existing but do....oh how they do) where detainees have been beaten and held without the opportunity to inform friends and family where they are. Knowing this adds wrinkles to the Oscar Grant case for me.

Either way, concerning the actual events following the shooting and death of Oscar, Oakland citizens who stood up at protests and rallies are to be applauded. There was only a minimum of misdirected rioting and looting, and most of the pro-active behavior seems to have been clearly focused and responsibly carried out. Come to think of it I would have liked to have seen that illustrated a bit in the film too, if anything as an example to others who may find themselves waiving a sign or banner someday over an injustice.

Back to the film itself. Word of mouth in many circles is that Fruitvale Station is this year's Beasts Of The Southern Wild. Having really liked Fruitvale as a piece of cinematic work, regardless of personal nostalgia, and plot, and Beasts being one of my favorite films of this last season, this is great news. Let's be honest though, the Sundance Film Festival [where the film debuted] is by and large comprised of a lot of privileged, mainly white, people. You can't sit on a committee or be a die-hard participant year after year without a little coin in your pocket, or being subsidized somehow. I really, really, REALLY hope the comparisons aren't stemming from the fact that both films feature black casts. The story of Beasts, for example, could be told with characters of any ethnicity, and was more a live action Miyazaki film to me than anything else. As well, Fruitvale Station is also a lot more than a film with a black cast. Again, it illustrates the truth of ethnic diversity in the economically challenged areas of the big cities. To draw comparisons to these two films simply because they are cast with black actors would be, well, ghettoizing them.

Fruitvale Station, to me, is for anybody who believes in community, love, and being able to better yourself through the advent of those attributes. To see a film named after, and in many ways about that very area, where I myself learned these things? It was a little magical.

Highly recommended, and I see a bright future for director Ryan Coogler.

Review published in somewhat different form during the Sundance Film Festival in January 2013. The film opens in limited release in U.S. theatres on Friday, July 12, before expanding nationwide in the coming weeks.