Neuchatel 2013 Review: IN THE NAME OF THE SON Has The Church In Its Crosshairs

Evoking the gospels both sacred and profane (Father Tarantino, hallowed be thy name), Vincent Lannoo's In the Name of the Son (Au nom du fils) is divided into six 'books'. It is only fitting for a film that veers wildly between farce and tragedy, but also between engaging thriller and limp noodle.

It's a savage and incendiary take down of the Catholic Church that is, somewhat improbably, soft as a whisper -- a valentine to forgiveness and spirituality. As a follow up to his deadpan mockumentary Vampires, I don't think anybody could have seen this one coming.

The film opens with a YouTube prologue, where two burly and buffoonish priests make a series of increasingly ridiculous requests of their parish -- Money? Time? 500 pounds of cement, gravel and roofing materials? Of course you should volunteer it, this is The Church we're talking about! -- and Lannoo appears to be laying his cards on the table. That one priest will be later revealed as a pedophile and the other a violent militant is not the subversive ace Lannoo has up his sleeve. Instead, it's his insinuation that maybe, despite all else, they aren't so wholly irredeemable.

Neither of the two priests are the film's protagonist; that would be the devout and pious Elisabeth (Astrid Whettnall). Prim housewife, mother of two, Christian talk radio host, Elisabeth is a model true believer. So much so that she clings to her faith when her life starts being beset by a series of Job-like catastrophes. Just how Job-like? Let's make this brief. Her husband accidentally shoots himself; her church lies about how he died. Her priest molests her 14-year-old son; her son reveals it live on air. Her son thinks he might be gay; her response is to condemn him. Her son puts his chin over a rifle and pulls the trigger; she opens the door just in time to see it. This all happens in the first 20 minutes. Did I mention it's a comedy? 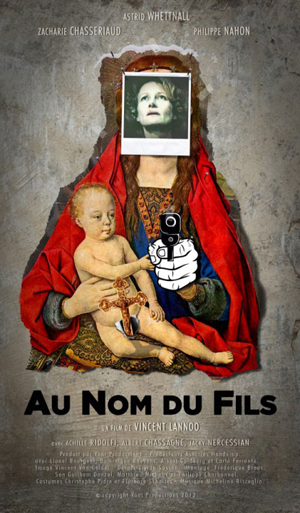 While the poster and preview (embedded below, though heads up -- it's only in French) play up the film as an avenging angel crusade, this is not Death Wish For Jesus. The tone it strikes is more wryly perverse, depicting its sordid goings on through a veil of absurdist irony, similar to Ben Wheatley's Sightseers and Todd Solondz's everything. In fact, it's helpful to look at the film as a kind of Solondz offering for the Sunday school set.

Lannoo is never afraid to let his characters perform heinous acts, but at the same time refuses to let them be entirely defined by those actions. He depicts the hermetically sealed world they live in with all the requisite kitsch you'd expect, but not without warmth as well. Elisabeth's call-in radio show is ridiculously inane, but the answers she gives are well thought out and sincere. The people in her world may be sheltered and small-minded, but they're not worthy of scorn.

Except the clergy, that is.

The real problem with organized religion, the film argues, is the organization part. What sets Elisabeth down the warpath is not the events that happen to her and her family, but the cover-ups. In an extremely provocative insinuation that I wish the film had pursued a little bit further, Lannoo suggests that his character is not going to war with the Church, but rather trying to serve it. That by hunting down pedophile priests protected by the Holy See, by casting the wolves from the flock, she can cleanse the institution she loves so dearly. I don't think it's much of spoiler to say that doesn't quite happen.

While Lannoo may condemn the institution, he doesn't disparage its teachings. Father Achille, the priest who initiates the relationship with Elisabeth's son, also teaches him lessons of value. After his father's death, Jean starts careening towards xenophobic skinhead nationalism, and it's Achille who sits him down and gets him out of it. Achille is still a pedophile, protected by a corrupt hierarchy, but that doesn't make his wise words about tolerance any less true, just all the more disturbing when the camera pans down and his hand is on Jean's.

The executions evince this same murkiness, and it is much to the detriment of the film. The violent second act is a lot slower and even-handed than what marketing materials show, with many characters giving monologues, and many kills happening just off screen -- couldn't get enough squibs, maybe? -- to the extent that I'm not quite sure how much fun I actually had with the film. Don't get me wrong; it gives you a lot to chew on. Here at the Neuchâtel film fest, I've seen people get into hours-long conversations about the film. But it almost plays better in reflection, in conversation, than it does on screen.

I suppose it's a fool's errand to criticize a film that gets you talking, gets you thinking, but there's something peculiar about this one. It's odd for an 80-minute film to feel overstuffed, but there you have it. It's to be expected. The Church is a maddening, overripe subject. As an outlet for a lifetime of mixed feeling about it, In the Name of the Son is Vincent Lannoo's exorcism.

Do you feel this content is inappropriate or infringes upon your rights? Click here to report it, or see our DMCA policy.
Au nom du filsIn the Name of the SonNIFFFNIFFF 2013Vincent Lannoo

More about In the Name of the Son