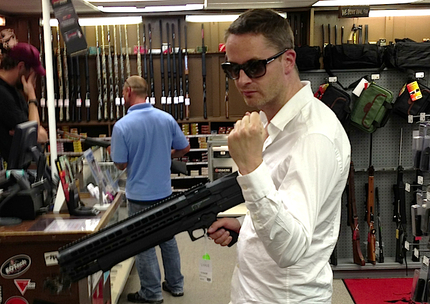 It's a Wednesday afternoon in late June and I'm walking in downtown Austin, Texas. It being late June, temperatures are blasting to well near a hundred degrees Fahrenheit. But that doesn't matter to me. Like the mirror opposite of Ryan Gosling's character in Drive, I could walk anywhere, anytime, at a moment's notice. That's when I get the call: Do I want to fire guns with that film's director Nicolas Winding Refn and his composer Cliff Martinez? I pause. I've never fired a gun before. Heck, being raised in a pacifist-liberal household of educators I've never even picked up a gun that doesn't resemble something from Star Wars. Well, if I'm going to take up firearms it might as well be with the man behind the fever dream operas of violence that are Bronson and Valhalla Rising, plus a former drummer of the Red Hot Chili Peppers. Also: I'm in Texas. Okay, then, I'm doing this. I have fifteen minutes to get back to the hotel. I stop walking. I run.

Ladies and gentlemen, welcome to Five Days Of Refn, ScreenAnarchy's celebration of a director who has been called one of the most fascinating, controversial and visionary filmmakers of our time -- and that's usually all within the same sentence (just like that one). Featuring interviews, a retrospective of the man's work and much, much more, it's all leading up to the July 19th North American release of his latest cinematic sensation Only God Forgives.

So, we might as well get started with, you know, a bang.

Now how did I end up in Austin? It all feels a little unbelievable. How can I be the guy who gets flown out for a special screening of Only God Forgives at the Alamo Drafthouse? Is it really just because I was available? And how is it that I'll be the one interviewing Refn and Martinez after the screening? I mean I'm the guy at ScreenAnarchy who geeks out over micro-budget indies that play at Slamdance! But as I'll learn later that evening there's not all that much difference in the principles of a filmmaker like Refn and the fresh faced kids on the festival circuit. In fact, the most apparent thing about Refn is his incredible ability to be both deadpan and kind of gleefully child-like within the same instant. It's gotta be a Scandinavian thing. There's something innate about it. I can feel it in my bones. Trust me on this one, I've slept with the Nordic peoples.

We're in the van on the way to Red's Indoor Range on the outskirts of Austin proper. I sit in the back row, observing my fellow passengers: David Fear, Film Editor of Time Out NY, and Russ Fischer, Managing Editor at Slash Film. Both have beards; beards that put my beard to shame. Next to them is Ryan Werner, rep from OGF's North American distributor RADiUS. He's tapping away on his phone and making chit-chat with everyone. Driving us all to the "funhouse" is Sarah Van Zee, the cowboy boots wearing member of Austin-based PR firm Fons PR. And of course there's Nic Refn, sitting tall in a crisp white shirt and wearing shades, declaring that he's never fired a gun before. He sounds like a kid on Christmas eve, but with measured, calculating expectations of what's to come. Cliff Martinez, who I only just met at the hotel, sits back in his seat, remaining relatively quiet. He has fired a gun before, but it's been about ten years. By this point in our journey, most of us have become fast-friends, either by necessity of traveling together, or because Alamo Drafthouse head honcho Tim League preceded to try and get us all drunk the night before. Refn, as he was very clear to point out the evening prior, doesn't drink.

Russ will be our guide on the range. He's brought his own briefcase of guns. Classy. We also rent a revolver (a model a bit heftier than the one Eastwood packs in Dirty Harry), an AK-47, and a 9mm pistol -- a "pea shooter" as Russ calls it. I'm obviously the most apprehensive of the group. I ask the clerk at the counter, "what kind of firearm would be best for people 130 pounds and under?" I have this near-crippling sense that once I pull the trigger I'll be propelled backwards and onto my ass by the sheer force of... even a "pea shooter".

Refn has a million and one questions. Though he never once takes off his shades, one can tell there's a glint in his eye; a certifiable twinkle. He's like a kid in a candy store. I can't not admit that his energy is infectious. It's easy to get behind this man in his enthusiasm. Fact is, I'd probably follow him just about anywhere now. 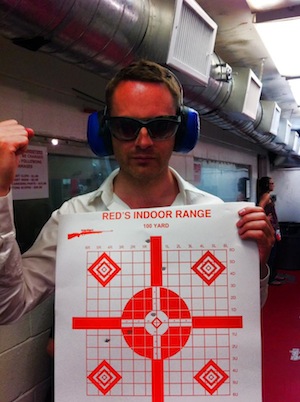 Standing on the gun range, Refn has chosen to fire the AK-47 first. He let's off a succession of short bursts. His large, but lean frame takes the brunt of the kickback of the blistering firearm with a crackling shiver. Standing a few feet behind and to the left of him, I involuntarily jump a half inch off the ground every time he pulls the trigger. 5 shots, 100 yards. Refn brings in his target. We all gather around to see how well he's done. "I killed the motherfucker!" he declares with a flash of boyish glee. Cliff goes back to trying the revolver. Russ finishes instructing Dave on the pistol. Refn and I are grinning at each other. "Are you going to try it?" He asks me. I shuffle my feet. "I think I'm going to start with the pistol. That makes more sense to me." Refn doesn't shake his head or look annoyed, but says, "Come on, Ben, we're all in this adventure together. You've got to." I smile and say I'll start with the pistol then see. We're indoors and neither of us have taken off our sunglasses.

I never do fire the AK-47. I fire three complete clips with the pistol and stop, terrified by my accuracy and grouping. I killed the motherfucker ten times over. Damn you, Kriya Yoga breathing.

I'm standing on the other side of the glass with Sarah and Ryan when Tim League shows up. He's heard about our little expedition, and being the good Texan that he is, wants in. He rents a shotgun so Refn and Martinez can feel how different it fires from other types of guns. By this point that Christmas morning feeling has passed, though there's still a crackle in the air. Fifteen minutes later and we're ready to call it a day, for evening is coming, and in our own respective ways we need to get ready for the screening that night. Like any sensible group, we line up for the bathroom before the car ride back. Refn watches the riflemen on the other side of the glass with intense interest. "The power this has over one is very seductive. It's very much like being a director. You fire with something that is like you." He picks up an imaginary rifle... "Hello my little laughing friend. We meet at last..." and fires it off into the distance.

As we arrive at the hotel, Refn asks if the Amy's Ice Cream across the street is any good. It is. "Who wants to go get ice cream?" he asks as we file out of the van.

Just like a kid in a candy store... err, ice cream shop.