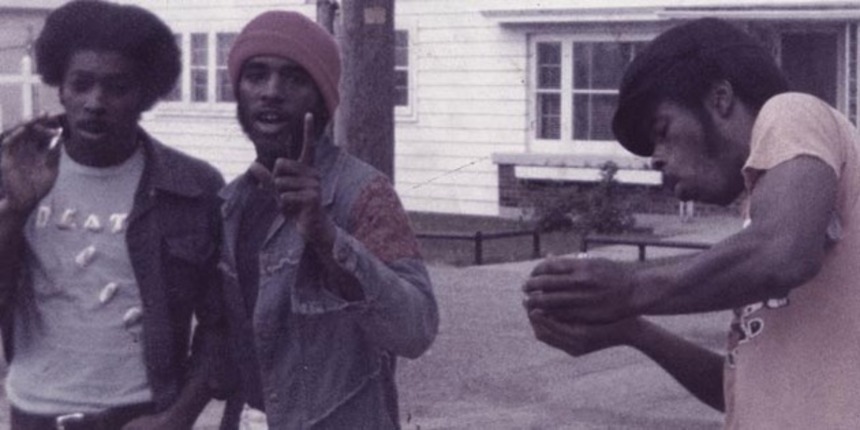 In the early 1970s, three teenage African American brothers, David, Bobby, and Dannis Hackney, formed a band called Death and played "hard-drivin' rock & roll" -- really, a precursor to punk rock, pre-dating pioneering black punk band Bad Brains by about five years -- across their hometown of Detroit. They didn't get far; their only single rarely got airplay and the unreleased master tapes for their debut album sat unheard in a dusty attic in Detroit for nearly 35 years.

A Band Called Death, directed by Mark Covino and Jeff Howlett, chronicles the Hackney brothers' story, from their early years playing instruments purchased with a family insurance settlement in a cramped room in their parents' house to the band's rediscovery and eventual revival several decades after the band called it quits. It's a story about family, faith, and a commitment to a singular divinely inspired artistic vision -- one that took the world more than 30 years to appreciate.

Now considered visionaries, Death never found any real success in their own time. They had a lot working against them: everyone hated the name (David's refusal to change it cost the band a record deal); nobody understood their vision (a group of black kids playing punk was unheard of); radio DJs wouldn't spin Death's self-released 45 (they didn't have a full-length record out and their music was overshadowed by the disco tsunami that swept the nation). Eventually it became too much for the Hackneys to endure, and after several years of disappointment, Death broke up in 1977. "I honestly think that it was almost a wrong place at the wrong time scenario, unfortunately," Covino said in an interview after the film's premiere.

Years passed, and Death's 1974 demos gathered dust in the Hackney's attic. Bobby and Dannis moved onto other music projects while David struggled with alcoholism and eventually succumbed to lung cancer in 2000. Then, suddenly, word of the band's only single -- "Politicians in my Eye" b/w "Keep On Knocking" -- spread over the Internet, and a couple of persistent record collectors in complete awe of this history-changing discovery tracked down one of the very few original 45s and brought it to the attention of music historians, label owners, and punk fans all over the world.

One night at an underground party, one of Bobby's sons heard the record and immediately recognized his father's voice. Then, as David had predicted so many years before, the world did indeed come looking for those master tapes, and Death was resurrected more than 30 years after their heyday. Indie label Drag City released their debut album, ...For the Whole World to See, in 2008.

A Band Called Death is an incredibly thoughtful and compelling film, one of the best music documentaries to come out in years. Covino and Howlett tell Death's story through archival footage, recent concert clips, and intimate interviews with the Hackneys and the megastar musicians in awe of them (Henry Rollins, Kid Rock, and Questlove sing Death's praises). It gets tough to watch at times -- you can feel the horrible pain Bobby still experiences when he recounts the Death episode and his brother's death.

But you can also feel his pride as he watches his sons play David's old songs in front of an audience for the first time and see his happiness when he realizes how proud David would be that Death is finally getting their due. A Band Called Death is not to be missed -- keep an eye out for any opportunity to catch this fantastic film.

Review originally published in slight different form during the Los Angeles Film Festival in June 2012. The film is available to watch via various Video On Demand platforms. It opens in limited theatrical release on Friday, June 28. Visit the official site for more information.