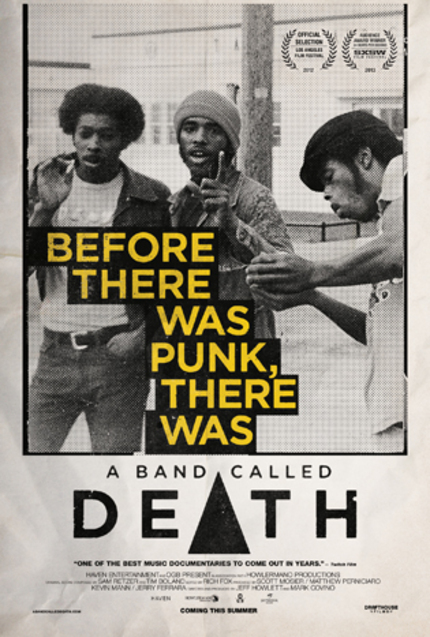 This year's SXSW had an amazing wealth of fantastic documentaries, three of which (Unhung Hero, I Am Divine, and Rewind This!) I reviewed back in March. One that I didn't review but managed to catch on my last day in Austin was A Band Called Death, an amazing documentary charting the history and rise from obscurity of early '70s proto punk band Death. The film is an emotionally involving and heart-breaking/swelling piece of forgotten history that nearly had me in tears, and if it doesn't affect you the same way, you're probably dead on the inside.

On May 24th Drafthouse Films will release A Band Called Death on VOD in the US followed closely on June 28th by limited theatrical engagements starting in the band's hometown of Detroit. Today we get the first look at their new poster for the film and it looks good and it tells the truth. You need to see this film, if you need further convincing we've added the trailer below, back in its awesomeness and the awesomeness of A Band Called Death.

Before Bad Brains, the Sex Pistols or even the Ramones, there was a band called Death. Punk before punk existed, three teenage brothers in the early '70s formed a band in their spare bedroom, began playing a few local gigs and even pressed a single in the hopes of getting signed. But this was the era of Motown and emerging disco.  Record companies found Death's music - and band name - too intimidating, and the group were never given a fair shot, disbanding before they even completed one album. Equal parts electrifying rockumentary and epic family love story, chronicles the incredible fairy-tale journey of what happened almost three decades later, when a dusty 1974 demo tape made its way out of the attic and found an audience several generations younger.  Playing music impossibly ahead of its time, Death is now being credited as the first black punk band (hell...the first punk band!), and are finally receiving their long overdue recognition as true rock pioneers.