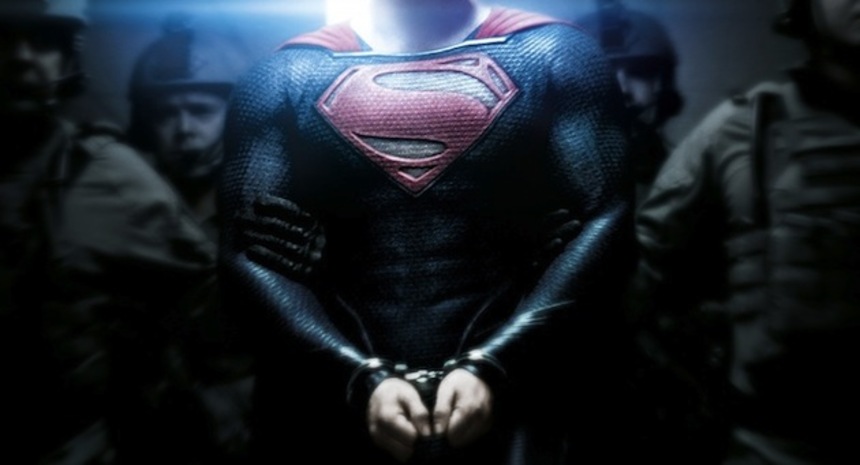 While the internet is tearing itself apart in its efforts to empirically determine whether Man of Steel "sucks" or "is awesome" - because such things are now apparently possible, given Superman Returns' near-unilateral, and intellectually disturbing, dismissal - I'd like to pause to make a gentler request: may we please retire Superman?

I understand why Man of Steel - and for that matter, Star Trek Into Darkness - is the way it is. I understand the market reality of Hollywood in the summer of 2013, and the theatrical exhibition industry for movies generally, and what is different about North America now versus 1938 (when Superman first appeared in Action Comics), or 1966 (when Star Trek first took to the air), or 1978 for that matter (when Superman made the leap to the big screen and created, for all intents and purposes, the Comic Book Movie).

It's only that both of the new films, Steel and Darkness (and if your titles can be thus reduced, I'd argue we've located at least part of the problem), make me wonder: when the spirit of the thing is no longer in evidence, do we need the thing any more at all? Or put another way: if you have to rewire something so completely to make it work for a modern audience, does the modern audience want it in the first place?

[Note: spoilers for Man of Steel and Star Trek Into Darkness follow.]

Star Trek Into Darkness and Man of Steel are blunt, violent movies. They are blunt, violent movies because the people who made them presumed, probably correctly, that the (young, male) audience would enjoy seeing, respectively, spacefaring spectacle and earthbound superfights created at a level of Hollywood finesse unparalleled in the whole history of movies. They are effective as such.

Now let me ask you a question: At any point in your life until now, would you have described either Star Trek or the Superman franchise as "blunt" or "violent?"

Our popular entertainments mirror the times that we're in, and perhaps we're in blunt and violent times. I'd like to think there's at least a possibility that the ghost of Gene Roddenberry would have no problem with Abrams, Lindelof et. al.'s post-9/11 manhandling of the Star Trek mythos. Roddenberry did, at least in part, design that mythos to respond directly to the contemporary world. Whatever else it does clumsily, Star Trek Into Darkness responds to its contemporary world, both in theme and in tone: it is a story about the time that we're in (inasmuch as this is possible in a largely brainless action movie), and it is also a movie very much for the time that we're in.

But Superman? When and how did Superman get so completely and cataclysmically scrubbed of his innate, seemingly inherent, sense of wonder? The man can fly. How can Man of Steel be two hours and twenty-three minutes long and contain not even a single moment of elevation?

Ironically, Man of Steel takes as a beacon concept the potential for Superman to be a heroic role model for the human race - and then makes an almost comically poor effort of demonstrating why any human being would aspire to be Superman at all, after the dead bodies are totted up and planetary annihilation has been scarcely, and expensively, averted. (Some have pointed out the cross-wired logic of the film's final sequence, where Pa Kent watches young Clark caper around the yard dressed in a Superman cape - behaviour we can all remember from childhood, because of course Superman existed in our childhoods. Superman does not exist in Clark's childhood, though - and whereas the final scenes of Captain America: The First Avenger demonstrated categorically that Cap's innate goodness had begun to rub off on the aspiring youths of Brooklyn and beyond, Man of Steel's endgame is the self-reflexive conceptual circle-jerk of having Superman, essentially, aspire to become himself!)

By design, Man of Steel's Superman is devoid of the sunny optimism and near-goofy ease of manner that has defined the character for 75 years. Christopher Nolan, David Goyer and Zack Snyder have retrofitted him with a piercingly original origin story that works conceptually but wholly erases the saga's sense of fun, replacing it with systemic paranoia, personal confusion, and a pervasive unease about, oddly, heroism itself.

In Star Trek Into Darkness, the notion that Starfleet is trekking across the galaxy on an altruistic mission to scientifically expand human knowledge is nowhere in evidence. The real villain of the piece is not Khan so much as the idea that, following the destruction of Vulcan (which the creators of the film have referred to as the Federation's 9/11-level event), Starfleet would tilt towards covert militarization. That's a cynical idea, not unearned in our real-world political landscape, but a distinctly odd fit with the ceaseless optimism that forms the core purpose of Star Trek. Not just the theme, and not just the point, mind you: the purpose. Star Trek was designed to advocate for that optimism. If you remove it, how is it Star Trek?

And since Star Trek Into Darkness brings 9/11 into the conversation by way of a freaking title card dedication in the end credits (!!!), let's come right to it: there have been few things more disturbing at the multiplexes this summer than the astonishingly cavalier treatment of 9/11-style imagery in Star Trek Into Darkness and Man of Steel. (That we exist in a time where whole categories of blockbuster images can be described as "9/11-style" is a terror unto itself. See Transformers: Dark of the Moon for the nadir of American thoughtlessness.)

In Star Trek ID, Khan crashes a starship into the middle of San Francisco; in Man of Steel, Superman and Zod, almost singlehandedly, level Metropolis. Skyscrapers crumble to the ground in sickening CGI recapitulations of mass urban destruction with which we are all too familiar.

It isn't the destruction, itself, that I find repugnant. The Avengers saw quite a lot of downtown New York destroyed last summer. In that film, though, we repeatedly see the destruction through the eyes of the civilians. We repeatedly see the heroes trying to protect the civilians. We see one of the principal characters literally sacrifice his life to prevent the middle of a major American metropolis from being leveled with people inside it.

In both Star Trek Into Darkness and Man of Steel, though, the heroes never seem aware of the collateral damage of their adventures at all. At the very end of the final fight in Man of Steel, Superman finally notices a small family of terrified humans, and it snaps him out of his destructive reverie long enough to finally, y'know, save a life or three. Up till then, though -- I mean, really, can we speculate? How many human beings would reasonably have died in the last 45 minutes of Man of Steel, given the Central Park-sized ring of flattened buildings in which Clark and Lois share their first smooch? How many Federation citizens are killed offscreen in Star Trek Into Darkness so that Mr. Spock and Khan can engage in a fistfight on a garbage truck?

There used to be an element of courtly romance about the Superman/Lois relationship, too; a romantic comedy bumbling and fumbling that bespoke chaste sexual tension. (This is why, in its day, the kryptonite condom joke was actually funny.) Superman's very '40s-Hollywood portrayal of workplace romances reached its zenith in Superman: The Movie's musical-esque flying sequence, and was later refracted brilliantly as a broken, 21st-century tone poem of adults moving on with their lives in Superman Returns; but no such conceptual reorganization is evident in Man of Steel, which couldn't apparently give less of a fuck about its mythology's central romance.

See, Superman is romantic. It's inherently romantic, and idealistic, and intentionally uplifting, something that Man of Steel pays lip-service to but never actively demonstrates. Superman is also, I suspect, fundamentally of its time. The character was created in 1938, expanded through the '40s, '50s, and '60s, and finally came into its own in the '70s with the launch of the motion picture. Superman: The Movie was Superman at apogee, a perfect combination of the goofy cartoonishness we associated with comic books before Frank Miller and Alan Moore took over, and the transformative potential of special effects cinema to bring us all up into the clouds with him.

I suspect, though, that Superman 1 is a right place/right time scenario, as are many genre-defining films. Since then - and I mean literally since that first movie - the efforts by all and sundry to continue to make Superman movies that are dramatically viable have all been somehow problematic. Some of the results work better than others, but each new entry is met with a cross-cultural paraphrase of Lois' article from Superman Returns: "Why does the world need Superman?"

And here's the thing: it doesn't, just like the world doesn't need John Carter or (spoiler warning!) the Lone Ranger. Just like it doesn't need Captain Kirk and the crew of the Enterprise any more, maybe. They were characters of their time, built and designed for their time, and efforts to resurrect them, zombie-like, from the dust of the popular consciousness only belies how insistently - how wonderfully, transformatively, necessarily - we continue to stir the soup of pop art after every major ingredient is tossed in.

It's okay: sometimes, we move on. Superman was wonderful, and wonderful for a long time, and across multiple genres. It's fitting that the character who kicked off comic book superheroes themselves would go on to kick off big Hollywood comic book superhero movies, too. But why, forty years later, do we need to keep trying to bring him back? He had his time. Superman's work here is done.