Batman And Superman Together in MAN OF STEEL 2! 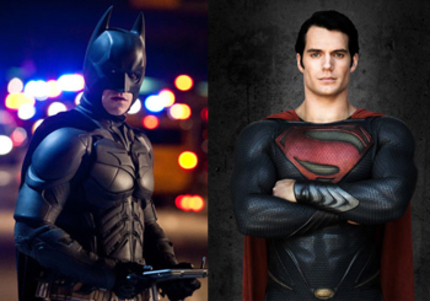 What began as -- of course -- a run of the rumor mill leading up to today's Man of Steel panel at Comic-Con today was confirmed by director Zack Snyder. After numerous run ins in the comic book universes they inhabited, Superman and Batman will finally meet on the silver screen in Man of Steel 2 in 2015.

Director Zack Snyder officially announced that Batman will indeed appear in his follow-up to "Man of Steel." He said in a statement, "I'm so excited to begin working again with Henry Cavill in the world we created, and I can't wait to expand the DC Universe in this next chapter.  Let's face it, it's beyond mythological to have Superman and our new Batman facing off, since they are the greatest Super Heroes in the world."

Henry Cavill will play Supes again. David Goyer will write the sequel to his MoS screenplay. No word yet as to who will play Bats in this one. For sure that is going to be one sought after role though because this should eventually lead into a Justice League film which should rival Marvel's Avengers franchise. DC is planning on a film of The Flash in 2016 and then the Justice League film in 2017.
If you were to hazard a guess as to who should play Bats in this new film, who would you pick? What about Goyer's screenplay? Will they be partners or rivals?
Sign-In to Vote
Tweet 0 Submit

Let me make a wild guess here: they'll start out as rivals and end up being partners fighting a greater threat -- the shock!

It seems like DC are rushing this union. It would have been better to keep the franchises separate and then just have them meet up in the Justice League movie.

I know Bale said he is finnished with Batman unless Chris Nolan was involved...I recon Warner Bros should just cough up that big pay check, and get Nolan to ask Bale to do it and you have a cool 1 billion at the box office..

Cough up the bucksand get Bale back in this thing. It can't be The Dark Knight without Bale

Wow. "The Avengers" really did make WB and DC shit their pants.

I predict that they probably aren't even gonna bother us with Batman's origin story, even in the new Batman's 1st standalone film. That might actually turn out to be a good decision.

But come on. This isn't the right way to build up anticipation for "The Justice League." I think Marvel Studios has the right formula. Give every character at least 1 standalone film, and then tie them all together with something relevant from each of their stories.