Review: COMMUNITY S4E12, Heroic Origins (Or, Hey, Here's An Idea: Let's Insult The Entire Fanbase And History Of The Show) 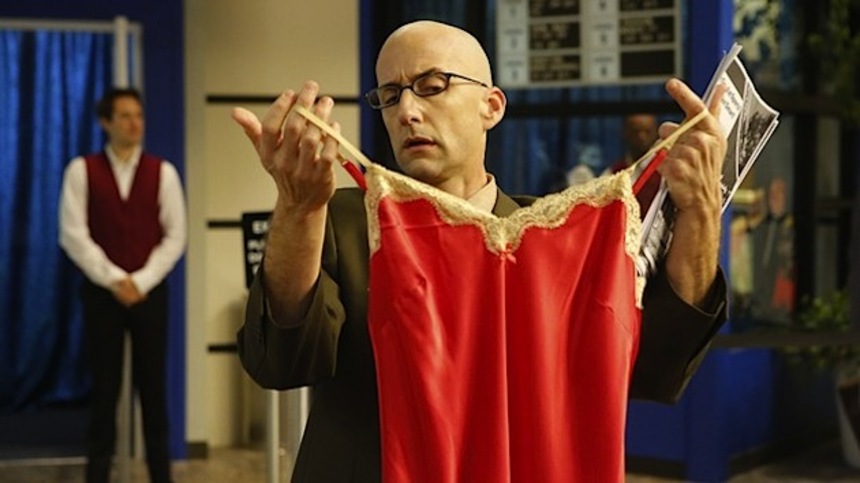 So if this is, indeed, one of the last Community's ever I am both relieved and frustrated that Dan Harmon had nothing to do with it. In the Harmon years, this episode wouldn't have gotten past the idea phase in the writer's room, despite it sounding on paper like a "classic Community scenario." (read that in a sarcastic TV announcer voice) Yes, in case you skipped the headline it is that bad. Though my frustration stems more from exhaustion and disinterest at this point than just pure nerd rage.

Okay, time to get into the knitty gritty. Heroic Origins is quite simply just that. There's no real double entendre here. It's as plain and straightforward and uninteresting (and insulting, but we'll get to that) as just about every expository line and reveal in the episode. So... as graduation looms, the Study Group (sans Pierce, who is giving a kidney to half-brother Gilbert) needs to buckle down for their History final. But Abed's been doing a project of his own, and with the hope that the final piece of the puzzle will fall into place, he is finally ready to share it with the group. What may that be? Abed has collected copious amounts of data that point out that all the members of the Study Group were destined to meet. Yes, these chance or peripheral encounters and happenstances with everyone pre-Greendale led them all to Greendale.

Quite early on, the writers have called out their own problem with Jeff stating to Abed: "We don't have origins, we have lives." Yep. Right there. That's the kicker. We just don't need to tie their story, their story of friendship at Greendale to the pre-Greendale days. We don't need to see Adderall Annie or Footballer Troy or Abed telling Shirley's kids that they shouldn't see The Phantom Menace in 2008... which leads to Shirley leaving Andre at a restaurant to pick up the kids, where he then subsequently hooks up with a stripper, who Jeff just got off in court, wherein Jeff actually encourages said stripper to go after the married man.

We don't need these moments because like Shirley and Jeff state themselves, they're not those people anymore. Those aren't the people we care about and know. We don't need an all encompassing, linking group origin that behaves like some of the more schmaltzy episodes of Lost, the entirety of Paul Haggis' Crash, or yes, as Abed states, Unbreakable; An origin of connective tissues and threads that is far, far less like Kieslowski's Trois couleurs Trilogy (Britta's hilariously over the top pronunciation of each title in the trilogy was the only moment to make me laugh tonight, probably because I just watched Rouge again). My biggest issue with this idea is that shows and movies such as Lost or Crash take the notion of happenstance and of a grater connecting tapestry in the universe far too literally and completely. Heck, I believe in some form of it, but the reason why Kieslowski's films work is because he doesn't ruin the mystery by explaining the mystery. There is a euphoric, enchanting moment of connecting to that something greater and then things move on. And we're all the better for it.

Obviously an episode of a sitcom is not going to play out this way, but for it to play out the other way is just... well, it is ultimately insulting. Insulting in the way that it trivializes these people to their base stereotypes and denies the history of the show a little distance from pre-Greendale days. Yes, it is trying to make a point that these people were never quite just these stereotypes, and that they can change (and did), but it is completely unable to express this. Instead Heroic Origins is full of moments like where a punkish Britta blindly follows an absurd and bogus cause, Annie chucks pill after pill after pill as if they're candy, and an unblinking Abed is forced into therapy by his father because he goes around theater to theater telling people they shouldn't see The Phantom Menace. In 2008. The fact that every major connecting thread relies on Abed telling Shirley's kids not see a movie that would not have been playing in the theater on any kind of regular basis (or even revival) is perhaps the biggest, most massively misguided and lazy plot element to ever be presented in the show. Why? It's the simple fact that many of us fans of Community, and probably Star Wars, would know that this just doesn't make much sense. And Abed would agree. Even the atrociously cartoonish shadow of Abed we see tonight would agree. So, yes, sense matters in something like this. Also, Shirley to just getting up and leaving Andre at the table without any explanation, was... senseless.

So the other reason we went pre-Greendale tonight? Why because, if the show gets a fifth season, we will most undoubtedly be going post-Greendale for a good length of the season. They're trying to get us prepared for that.

With one episode left -- and for perhaps forever -- it pains me that we've gone back to the rickety, misguided pod-person incarnation of the show that I struggled with so much at the start of the season. I know Port, Guarascio and the rest of this new Community are trying their darndest with gusto and with earnest. You can tell they are by the string of really decent episodes we got this season. But we don't need an imitation, and this Community still feels like an imitation. If you guys win the favor of NBC and Sony execs and get a fifth season, please remember that... okay? Because if not, well.. I am finally going to say it: I'd rather have no Community rather than an imitation of Community.

- Oh, and as it turns out, Chang was cohorting with Dean Spreck of City College after all. This matters to me because I find it so lame that they're dipping back into a pool that I feel at this point is oh so dried up. The presence of the other dean does nothing largely because he has been a character which seems to appear for all but two minutes every season or so.

- All the references to Spider-Man plus Donald Glover's bemusement at all of them being Spider-Men in their own way was somewhat amusing.

- By proxy, the Dean even gets a little cross-dressing origin of his own.