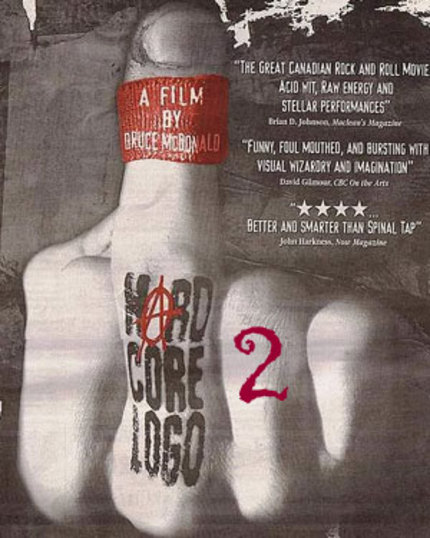 Back when Pontypool was tearing up the festival circuit in late 2008, I managed to have a couple hour sit-down with director Bruce McDonald that started in his office and carried over into the bar across the street.  While still in the office of Shadowshows, his production company, besides admiring a personal letter from Terrence Malick (holyshit!) that was framed on the wall,  I noticed a script on the desk labeled Hard Core Logo 2 and I asked Bruce about it at the time.  He was vague about the details, but Eye Weekly, a local (Toronto) entertainment paper, has a piece on all of the projects the iconic Canadian director is juggling, from his Broken Social Scene movie (This Movie Is Broken) to the recently announced Trigger, which apparently was inspired by Louis Malle's My Dinner With Andre.

The details on Hard Core Logo 2 are clipped below, but check out the full piece at EW, here.

For many years we've been talking about doing a follow-up. Hugh and Callum have both been super busy so we thought that while we were waiting -- and waiting to see if Joe Dick comes back from the dead -- we could take some of the minor characters from the first movie and put them in the foreground. So Bucky Haight, who is their mentor in the original, becomes one of the major characters. I become a major character, too -- I play the filmmaker who filmed the onscreen suicide of the unfortunate Joe Dick and who's wracked with guilt. Care Failure and her band Die Mannequin play themselves -- they're recording an album with Bucky and I'm documenting it. She's been channeling the spirit of Joe Dick -- he's writing songs through her. It's crazy but it's essentially the story of them making a record in this old dancehall in northern Saskatchewan or Kansas, depending on which country we embrace.