Destroy All Monsters: Daddy Issues Are For Pussies, and Other Things I Learned From IRON MAN 3

"That's how Dad did it; that's how America does it; and it's worked out pretty well so far," Tony Stark / Robert Downey Jr. quipped in Iron Man, in a glib one-liner delivered to a hungry batch of arms-buyers, seconds before those selfsame arms blew the whole place up.

It was American overconfidence, writ large - and welcome to Marvel's 21st century superhero world, where the villain might (if you're lucky) be the fella with the red skull for a head, but is more likely to be your kid brother, or your girlfriend's dad, or the creepy bald father figure running your daddy's company for you, with the not-at-all-evil-sounding name of Obadiah Stane.

By the time Tony Stark is chiding an 11-year-old boy for moping about his absent father in Iron Man 3 (read James' review here), we've witnessed two whole Iron Man feature films that have dealt, directly or indirectly, with Stark's daddy issues, so his rejoinder to the kid who finds Iron Man hiding in his garage might seem self-serving at best - except that if it is about anything, Iron Man 3 is all shot through with unreliability on a personal, global, and systemic scale. And yeah, in an unreliable universe (where gods with hammers fall from the sky and a wormhole might open above New York City and swallow you whole), fretting about whether or not your father did right by you does seem a bit #FirstWorldProblems, doesn't it?

I haven't decided if Iron Man 3 is the best thing Marvel has yet put forward or one of the worst, but I'm willing to bet the answer lies in whether or not Marvel's outright daffy choice with the Mandarin actually works. (Hey, spoiler warning, if you're still here.)

Outside its principal "villain," the film is at least relentlessly (even too relentlessly) interesting. Iron Man 3 is wholly unafraid to swim in a thick chemical soup of real-world ideas, even while preferring not to dabble too comprehensively in any of them. You could call it The Dark Knight Rises strategy (let's appropriate Occupy Wall Street while saying absolutely nothing about it!) except that here, it probably works half as well. But if Iron Man 1 was enlivened by a weirdly 1:1 relationship between its star and its character, with a roaring subtext provided by Downey's metabolic reemergence from drug-crazed depravity to the Hollywood A-list via Tony Stark's life-reprioritization in an Iraqi prison cave, Iron Man 3 pulls the same trick by way of its writer-director.

Shane Black and Iron Man make a weirdly synchronous fit: insisting that they don't give a shit about any of that superhero stuff (or anything else, leading to the aforementioned, queasily excellent line, re: daddy issues and being a pussy), and then giving so much of a shit about that superhero stuff that Tony's climactic "clean slate" purgation of his suit fixation is literally accompanied by choral bells on the soundtrack. In other words, Iron Man's trick is to be the Marvel universe's defining asshole-with-a-heart-of-gold, and that fits Shane Black's creative intentions to a T. The resulting film is a weird fit for the previously day-glo Marvel Cinematic Universe, where the high-water mark of conflict thus far was Tony poking Bruce Banner with a stick, and the subsequent whining from Cap. But this is Iron Man's movie, and I'll take it.

But boy, when Ben Kingsley says that Iron Man 3 is "all about the masks," he ain't kidding - and those chewable, Waco-accented "lessons" from the Mandarin take on a whole new level of meaning. It's one thing to give us a hero who is so obsessed with his own "shell" that he's created 42 of them in the space of six months; but quite another when Iron Man 3 perpetrates the greatest dupe thus far in the history of proper comic book movies, by way of its principal villain.

Having the brass to subvert the Mandarin to the degree that Iron Man 3 does - building an entire marketing campaign around a way, way out there supervillain performance from a marvelous actor, who turns out to be playing a character who does not exist - certainly establishes, at least, that Marvel Phase Two is capable of more credible narrative risks than anything in Phase One. And any grousing in the fan community around this whacko treatment of the Mandarin is off-base. It's a fair play, and even aside from the fact that the character as written in the comics (original incarnation, or the Matt Fraction version) is essentially untranslatable to a major motion picture that doesn't want various anti-discrimination groups on its ass, it's also a deft creative move to sidestep the magnitude of this canon's Number One Bad Guy by not introducing him at all. It takes a good deal of horse-sense to realize that not every peak in the mountainous history of comic books can be effectively scaled: some are easy, some can be Nolanized, and some are just better left to the imagination.

And of course the Mandarin doesn't exist - how could he, in the world that Iron Man 3 tells us it's playing in, from the first improbable strains of "Blue" that pull us through the studio logos in the first minute of the film? "We create our own demons," Tony cloyingly informs us. The Mandarin is the ultimate Daddy Issue, and thereby becomes the most fascinating and frustrating thing about Iron Man 3. 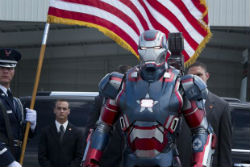 We need villains (and supervillains) for the same reason we need to tell our fathers to go fuck themselves when we turn 16: we need something to push against, and thereby prove who we are. And here, rather threateningly, we have an American blockbuster that outlines the notion that the American military-industrial complex's decade-plus tangle with the changing face of evil is, itself, just another manufactured product of a particularly entrepreneurial American capitalist. Pushing against this bad daddy is like pushing against the shifting dunes of sand into which our major figures of terror always seem to be able to disappear. It's snark of the highest order - suggesting that no one could pull off a social media presence like Bin Laden's without the support of a proper American brand department - and of course it's utterly preposterous.

But even with Tony running around America insisting that nothing means anything while simultaneously playing daddy to the same kid he's telling to get over it, the fact that Iron Man 3 proceeds to kick its audience right in the nuts by making its supervillain disappear like a dove under a magician's handkerchief is a feat of alienation par excellence.

Being as that it is, among other things, a thin pastiche of the kind of 80s action movies that Shane Black used to write before his two decade layover in nowheresville, it's nostalgically touching that Iron Man 3 takes any opportunity to take off-colour swipes at everyone it lays eyes on - capitalists, women, politicians, and in its piece de resistance, evil amputees. We're given a hyper-violent (guns! guns! guns!) throwback action film in the place of a superhero movie, whose sole purpose seems to be to wise you off and prove that men are awesome - except that it also informs its audience quite plainly (and in the first line of the film, mind) that all of our demons are invented.

This is a Marvel movie? Did a film that just blasted onto the screens, second only to The Avengers on domestic opening weekend gross, tell its whole audience to get over themselves, stop blaming made-up bad guys for all their problems, and go back to the garage to do some work on themselves?

Destroy All Monsters is a column on Hollywood and pop culture.