China Beat: What did China See in IRON MAN 3? 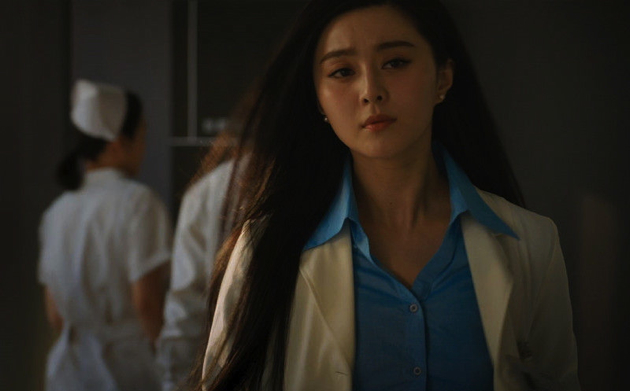 What should be obvious from these changes is that they are both inconsequential and baffling. I have it on good authority that a lot more footage was shot in China by DMG, but is now nowhere to be seen. When Wang Xueqi's involvement was announced, he was quoted as saying he was only joining the project because his character was substantial and pivotal to the plot. While pedants may argue that Wu saves Stark's life and is therefore of vital importance, it is almost inconceivable that what was finally included was enough to persuade Wang to sign up.
The big question here is why Marvel felt it was necessary to add anything at all to the film. The Avengers proved that Chinese audiences are already invested in these characters and this universe - they don't need homegrown talent onscreen to part with their cash. In the screening I attended, many audience members were already on their feet and walking out by the time Fan Bingbing appears onscreen. Many of those who did remain could be heard giggling at the actress' awkward, out-of-place appearance. I don't know anybody willing to contest that these additional sequences improve the film in any way, or helped sway ticket sales (apart from mine, obviously).
Either way, Iron Man 3 is doing great business north of the border, whether because or in spite of this additional footage. It follows in the footsteps of Rian Johnson's Looper and John Lucas & Scott Moore's 21 & Over, both of which also featured additional footage in their mainland versions. With Michael Bay's Transformers 4 likely to follow suit when it begins shooting later this year, there are no immediate signs of this phenomenon letting up, despite the lack of any conclusive proof that it's what the people want.
Sign-In to Vote
Tweet 0 Submit

"The big question here is why Marvel felt it was necessary to add anything at all to the film. The Avengers proved that Chinese audiences are already invested in these characters and this universe - they don't need homegrown talent onscreen to part with their cash."

I wondered that too. Was using some Chinese talent a pre-requisite for being co-produced by DMG?

it wasn't for the audience's sake. They got co-funding by a Chinese company, thus making it a Chinese co-production, and with that, they were required to get state approval. The producers promised government censors that they would include heroic Chinese characters in the movie to get the sign-off to make the film. That's exactly what they did. They also changed the villain's name from Mandarin to Man Daren.

What really puzzles me is how did a blatant racist caricature such as "The Mandarin" get passed the Chinese censors? Amazing! I guess Marvel/Disney got lucky this time. it also says a lot about the "competency" of CCP.

This was the plan, but they didn't get co-production status. They withdrew their application (yes, quite possibly because they failed to meet SARFT's criteria). But why bother in the first place? They didn't need the money and they clearly got the wide release the deal would have availed them anyway.

In fact the mandarin version of "Blue (Da Ba Dee)" was actually sung and produced by Eiffel 65's lead singer Jeffrey Jey, with the assistance of a chinese teacher. Look it up: https://www.facebook.com/eiffe...

Yes, the movie's Mandarin twist is brilliant. It kinda gets Marvel/Disney off the hook, racial politics wise (at least that seems to be the plan). But the name itself, "The Mandarin" is still a major slap on the Chinese face. I guess Chinese censors and movie goers have no clue whatsoever of the origin of this character. Now especially with this clever twist, one couldn't help but thinking Chinese are really being played.

Thanks - that's actually pretty impressive that Jey learnt the mandarin himself in order to sing it. Still completely negates the use of the song, however, as it was supposed to evoke 1999, which a new version of the song simply fails to do.

Actually, the Mandarin, even by Chinese standards isn't as racist of a stereotype as you'd think (in movies). If you have ever seen any old martial arts movies made in mainland china, they've always got this one guy who is extremely freaking skilled in martial arts, or is a wizard, and he's always a sadistic son of a bitch.

In the comics, the Mandarin was supposed to be English/Chinese and a megalomaniac.

You need to read the "Origins" section of this article, and then ask any friend that might know about the Iron Man series for corroboration: http://en.wikipedia.org/wiki/M...