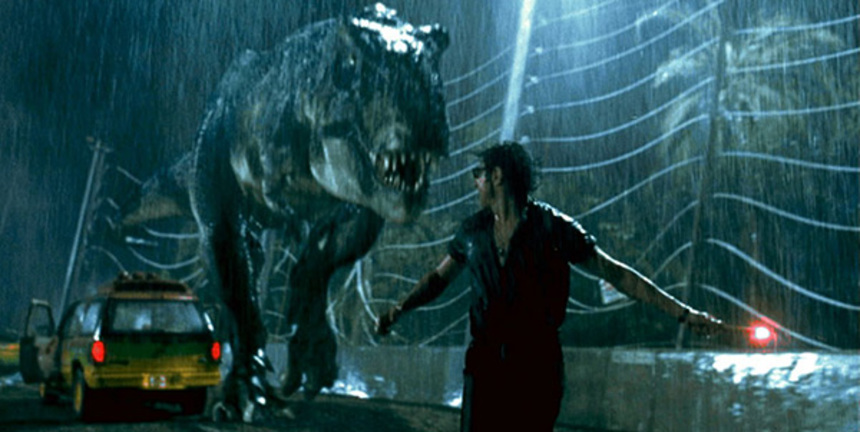 I sat in the theatre, kind of in awe. It was my first DTS screening, the cinema having been recently retrofitted for the technology. The year was 1993, and digital surround technology was finally finding its base (and its bass).

The water in the cup on top of the dash onscreen rippled, concentric rings fluttering to the sound. I'd found out later how they did the effect, by setting thick, metal, guitar-like strings at the bottom of the car and smacking them, causing sympathetic vibrations to move through the vehicle. The first time I saw it, it was movie magic.

The almighty roar of the T-Rex blared from all speakers, the twang of the guy-wires and electric cables snapping behind my ears. The snout of a giant dino loomed out of the rain, and proceeded to attack a carload of children.

In fairness, it was the near perfect intro that really hooked me, the delivery of the "clever girl" that echoes so much work that Steven Spielberg did in Jaws. It's all about what you don't see, the sound and fury more than making up for creatures that were only hinted at.

Two decades years later  the film still makes me believe. The movie still holds up, thanks to its sense of wonder, a clever story, and some astonishing execution, the integration of CGI, model work, animatronics and live action plates shaming many modern productions made for many millions more.

Sure, there's plenty that can be scoffed at - the "Spielberg shot" of people looking in wonder, the weird snarfles that Golblum brings to his "chaotician" role (immortalized in a video linked to below), or even the weirdo "Unix! I know this!" stuff from the "hacker kid." Yet all these are kind of accepted in the whole, glossed over in favour of the "nuh uh uh!" of the computer virus, or Samuel L. Jackson's droll delivery of announcements over the loudspeakers providing a strange echo to his work in Do The Right Thing.

There's still only one scene that I find super awkward, where Laura Dern chastises an ice cream-eating Richard Attenborough over his blindness. She's kind of terrible, but Sir Richard nails the role so completely I can forgive even this explicit expositional moment.

Meanwhile, perhaps my favourite part of the film (besides the mayhem, obviously) is in fact the most expositional, the "Mr. DNA" ride that our characters are taken on. We get Richard Kiley ("we've spared no expense") doing narration, along with a Southern twang for a springy molecule.

It's only now I get the kind of inside joke played here, as of course one of the more obvious voices to have hired would have been Sir David Attenborough. That, however, may well have been a conflict of interest.

But of course we come to a movie like this for the beasties. It may be a bit of a stretch for a modern audience to fully embrace the awe audiences felt when we first encounter the Brachiosaur munching the tree tops. Before this, dinos tended to look crappy on screen. Even well executed stop motion belied the artificiality of the creature. Here, at last, we were seeing the dream of the photo-real from an effect.

It's no small irony that this is the shot that's held up the least well over these years - absent future tech like subsurface scattering and advanced textures and muscle mapping, the integration to the daylight plate isn't quite seamless. It still looks good, but nowhere near as astonishing as it once did.

The same cannot be said for the T-Rex or the Raptor shots. Cutting from CGI to animatronic (often within the same shot), these creatures hold up tremendously on the big screen still. Add a bit of rain, muck, and darkness, and immediately these virtual elements literally come to life on screen.

Throw in the beauty of the Hawaiian sets (doubling for an Island off Costa Rica), and John Williams' memorable, bombastic score, and you have not only one of the most financially successful films of all time, but also one of the most groundbreaking, most influential, and in many ways most successful genre pictures ever made.

For these many reasons, the limited theatrical re-release is cause for celebration. The chance to see these beasties in a modern facility is not something to be passed up. Find the biggest theatre you can, sit just a bit too close, and take it all in.

There's an added benefit, of course, something many continue to be highly skeptical about. Yes, the film has been 3D post-converted. If you've been hearing the mantra that anything that's post-converted is automatically inferior, you've hopefully read enough of my reviews by now to know that this is a complete falsehood. When done well, post-converts can actually be superior to in-camera solutions, even in cases where the original composition wasn't shot to be dimensionalized.

Jurassic Park already was compositionally a highly aggressive film. To give a sense of scale, Spielberg and his director of photography Dean Cundey place the camera for some extremely low angle shots, often shooting through foliage or netting to give a strong sense of depth. The frame is set at 1.85:1, making the closeups feel even closer.

In 3D, some of these shots are just tremendous. I feared that the transformation of the opening sequence that I love so much would become a blurry mess of motion-blur, but the process makes that scene feel even more intense. The extreme closeup of Bob Peck's teeth as he screams "Shoot her!" may be one of my favourite shots ever in 3D - on the large screen, I could practically count the cells on his tongue, and I felt like I was falling into the back of his throat.

From the Raptor/Kitchen scene through to the Gallimimus "flocking" towards our heroes, there's lots of gee-whiz moments that pop from the screen. For much of it, however, it's a genuine opening of the space. The process integrates the different planes well, it's not often that you get that sense of different card assembled in space. There's some ghosting present, but some of that may be accounted for by the close proximity I had to the screen, a result of a more acute angle of reflection.

The image looks rock solid, the colours vibrant even with the wearing of glasses, and the digital "print" even more conducive to allow the integration between digital creature and on-set plate photography to mesh.

Like Top Gun before it, the 3D provides the definitive version of classic film. Jurassic Park has been transformed with with artistry, nuance and sophistication, and it's an absolute must-see during this brief run.

We're living in a golden age of 3D, a fact that's belied by a whole bunch of misinformation and heaped-on vitriol by some that simply cannot get behind the process. Even conservatively, there's a reason to celebrate the re-release of the film period, and if 3D is a cachet to sell more tickets, I'm all for it.

I stand firmly in the camp, however, that when done well this type of 3D-ification can in fact be stunning. In the case of this Spielberg classic, I'd suggest we have a roaring success.

I welcome you back to Jurassic Park - enjoy the ride, while you can.