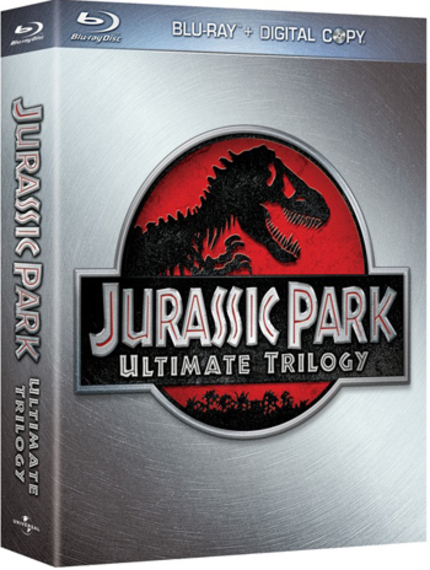 Jurassic Park and its two sequels arrived on Blu-ray recently, with can gleefully be described as a s***-ton of of special features and extras. That's the good to great news. The not-so-great news is that not only is the terrible The Lost World included in the package (it can't be avoided, it was a trilogy), but that the second entry in the franchise has a distractingly weak transfer, almost as though no one loved this gag-filled, technologically inferior, confused mess of a movie.

But if you can get past the ill-treatment of this unloved and un-loveable movie, then this set is actually essential for fans of Spielberg's alternately brainy and brawny love letter to dinosaurs.

Jurassic Park (1993)
Nearly 20 years after its initial release, I remain amazed at how effective Spielberg's adaptation of Michael Crichton's novel remains. Crichton, retooling his novel for the screen, trimming some of the scientific theory while still articulating its central thesis that just because science can do a thing, doesn't necessarily mean it should. But, you know, with kick ass CG and animatronic dinosaurs, the former brilliantly crafted by Stan Winston.

Imagine it: a great action movie that's in part scary and smart with the benefit of an ethos that's not quite bumper sticker ready. And man, how violent is the original Jurassic Park, even in terms of the implied getting-ripped-to-bits that occur out of frame. And something I didn't notice when watching the movie years before, which perhaps makes the movie feel unique and as fresh as it did back in '93: Jurassic Park isn't about a bunch of strangers trapped on an island, battling dinosaurs, it's about a bunch of smart people trapped on an island attempting to survive. With the exception of tough guy/game warden Muldoon (Bob Peck), no one was thinking about trying to find a way to kill all of the dinosaurs. Maybe this is the big softie in me, but that distinction--at least in part--makes the movie for me.

Presented here in 1080P (as are all three films), I have mostly good news for you: this is the best the movie has looked since it was theaters. Regrettably, there are a couple of scenes with grain (the whole exterior shot of the chopper landing is the bulk of it) but for the most part, the presentation is pristine. That does mean you get to see the dinos in greater detail than ever, which isn't as big a problem as you might think. The texture of the animatronic triceratops looks a little more rubbery than I recall, but for the most part, at a distance, the practical effects look great. Ditto most of the CG creations, particularly the one I was most worried about: the mighty T-rex. Either some correction was done during the process of restoration, or Spielberg got it right the first time, but the lighting around the biggest and baddest of the dinosaurs avoids that high contrast issue that makes many older CG effects look so off nowadays.

I can't say that the set is worth it for this movie alone, but this is simply the best way to see Jurassic Park after all these years.

The Lost World: Jurassic Park (1997)
Then there's this. You know, I somehow forgot or simply, through willful omission, blocked out the knowledge that Spielberg directed this misfire. Yeah, the movie had the highest grossing opening weekend for a while and made $600 million around the world, but a turd everyone buys is still a turd. Everyone just has a turd.

The bright, science adventure look of the original was replaced by a gloomier--I hesitate to say "grittier," because that's not quite right--style thanks to Cinematographer Janusz Kaminski joining the production this go-round. David Koepp, who has written a staggering number of bad movies, was the sole screenwriter this time around. Gone were the clever setpieces of the original and rigorous heated philosophical arguments in the context of a big, smart action movie, only to be replaced by a bunch of Japanese tourists running from and pointing at a rampaging Tyrannosaurus Rex through the streets of San Diego. Comedy! The villains were the cartoonishly evil executive and (theoretically) the dangerous mercs on the second island to collect dinosaurs to jump start the program again. I saw these guys are theoretically the villains but man, Goldblum's Malcolm and co. do more harm than good during the movie's running time, nearly dooming everyone to die about a half dozen times.

So, you've got this in the set too. Kaminski loves a bit of grain, and there's quite a bit of that here for effect. That's all fine and good, but somehow, the high contrast look shows up and scenes featuring the CG dinosaurs look a lot less convincing. I won't accuse Universal of not caring about this one, but if they, by some chance, didn't, I think we could all forgive them.

Jurassic Park III (2001)
Okay, after spending a lot of words tearing into The Lost World for being a terrible movie, allow me to defend the third entry, directed by the Joe Johnston who gave us perfectly solid and enjoyable fare like The Rocketeer and Captain America: The First Avenger, and not the one who would afflict us with the terrible Wolfman, from a script with a credit by Alexander Payne(!). It somehow gets less love than the Lost World, perhaps because the scope was smaller than that movie, and there fewer of the surprises to be found in the very first film in the series, but due respect: I cared about Sam Neill's Alan Grant in this one a hell of a lot more than any of the walking disasters of The Lost World. The kid in the movie is far less annoying, the heroes far less stupid (more bumbling, I suppose), and the dino attacks actually more shocking.

Jurassic Park III looks substantially stronger in its hi-def presentation than does The Lost World. There, I said it: Johnston made a movie that looks better than Spielberg (you can send those angry e-mails to charles@fakeemail.com). Seriously, though, light is a friend to this movie and its dinosaurs and consequently, the digital creations feel less like creations and more like monsters. There's still the weak scene of the cast running between the legs of stampeding dinosaurs that looks worse the better you're able to see it (why does anyone think this is a compelling visual?) but for the most part, high scores across the board for the look of the movie, and overall for this set.