TV Review: COMMUNITY S4E05, Cooperative Escapism In Familal Relations (Or, The Challenges That Come With Expectations And Closure) 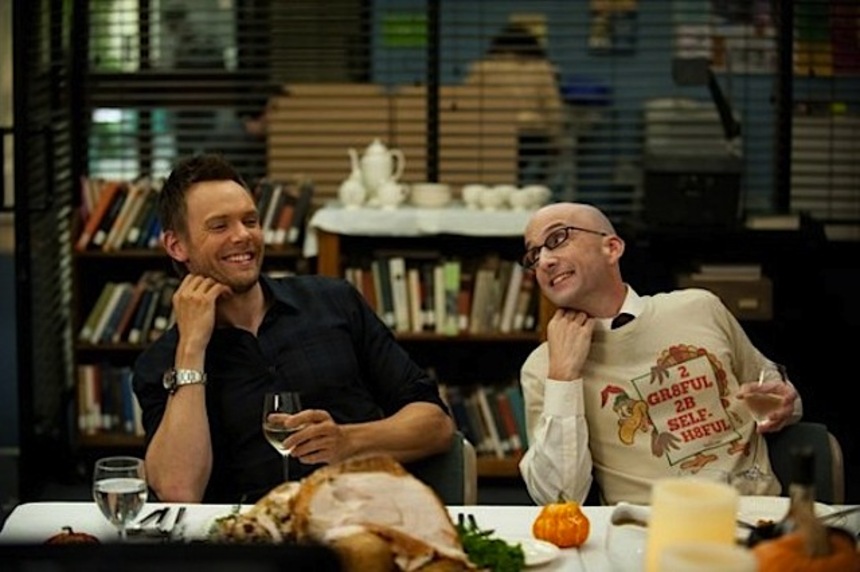 Jeff's challenges around the absence of his father most of his life have played an important role in Community since the early days of the study group. There have been key moments in each season that have touched upon his vulnerabilities, anxieties and fears due to what he felt was a broken home, but all without the plot point of actually introducing his estranged father. So we knew the day was coming that if the show lasted long enough there would  be the inevitable episode where Jeff faces his father for real. Although was it really warranted?

I've been of the mind for a while now that Jeff has been able to work through many of those fears about himself -- that he was unloved and less than -- through the family he's cultivated at Greendale. For Jeff to have closure, and for the show to end in some proper sense, I'm not entirely sure we ever actually needed to meet Jeff's father. But here we are.

It's Thanksgiving and while Jeff has plans to meet with his dad (whom he called after the Halloween adventure at Pierce's, and not at the behest of Britta), the rest of the group is invited to Shirley's for dinner. The less said about the half-baked The Shawshank Redemption/Prison Break homage that Abed starts to construct around Shirley's dire dinner situation the better. While we do get a fine moment from Donald Glover spouting off the line "We were just about to eat garbage dip!" the b-plot feels more like filler than usual; an unneeded beam in the thematic construct of familial relations gone awry.

Getting back to Jeff's solemn storyline (with Britta tagging along as the far too eager therapist). The genetics are all there in casting James Brolin as the man who sired Joel McHale, so though I would have loved to see Bill Murray in the role (a fan and Harmon favorite for the rumored part), it works. William Winger's home may be nice and neat, but it is very empty, even with the presence of Jeff's half-brother (played by Workaholics' Adam DeVine), who seems to be constantly on the verge of blubbering. With Britta off "therapizing" the half-brother (she creates role playing exercises with dinner rolls), Jeff and William get down to business. At first it is pleasant. Both men seem to carry some respect for each other, albeit superficially. Jeff is pleased with the no-nonsense, calm proceedings until William declares that leaving Jeff and his mother made Jeff a strong, independent man; that perhaps he didn't really need a father. Brolin sells the moment really well, staying matter-of-fact and respectful, as if one is talking to a business associate and not their own son. At this, Jeff is furious and departs.

The presence of the half-brother as a device is all too clear from the moment we see the guy pouting on the stairs. A veritable man-child, Jeff is startled to find him hiding in the back seat of his car, but with that has that A-ha moment, reflects on what's happened, how his half-brother has been treated like a nobody, and in talking some sense and showing some compassion to his brother, shows some to himself too. And with that he promptly turns around and gets the closure he was looking for, gaining some serenity and shedding some self-hatred along the way.

Tonight's episode is not all that funny, and it doesn't have to be. It wasn't supposed to be. Whether we were gonna get this one with Harmon on board or not, Jeff meeting his dad was always going to be one of the more emotionally volatile and bitter, if ultimately warm-hearted episodes of the show. If it had to be done, I'm glad it was handled with some care. And that care shows that these new guys really do know Community's history and they may have some pleasant surprises left for us wary fans. While the material written for Gillian Jacobs was way, way off, and the B-plot was stretched pretty thin, what makes tonight's episode truly the best of this rocky season is McHale's performance. I mean he nailed. From all angles, all levels, you can tell that he had been building to something and here it was: firm, honest, bitter, unsteady and loving, tonight we saw a vulnerability in Jeff that he rarely allows to let show, even in front of the study group. In the pain he embraced he found strength and then moved on. Sure one may argue that Jeff had let a lot of his well-groomed posturing and hidden dark side down by the end of season 1, but there was a shift in 'Familial Relations' that felt pretty authentic, and that's thanks again to McHale.

- While Jacobs was given some far-fetched bits (boombox celebration anyone?) I was concerned with how Abed was presented tonight as so totally detached from the rest of the group. Sure, he's got his own inner world and perceptions, but this episode made him seem quite far gone. Despite the title's allusions, I did not find this part 'cooperative escapism'. Perhaps this will be a point reexamined in a near future episode, but with some seeming growth from the guy that'd feel like some mighty dangerous retreading.

- With a major character arc reaching some closure, does this mean it's all zany hijinks from here on out?