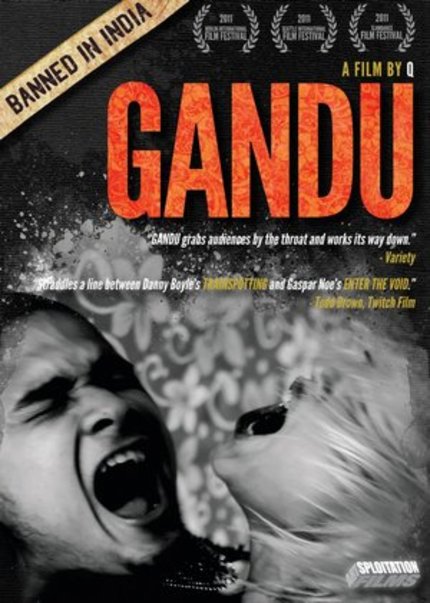 I'm a little late on these, but it is well worth catching up on a trio of recent releases from the upstart Artsploitation label on DVD. So, here are the initial releases, now on DVD:

Gandu
We love Gandu. Both Todd Brown and I praised the hell out of this film when it premiered at SAIFF 2010, and I've continued to champion the project and the creative force behind it. Artsploitation took a big risk in its acquisition, since it is a bit of an odd film, but I'm willing to support those big chances. Since I feel a bit weird quoting from my own review, here's a little piece of Todd's:

"Bold, energetic and by turns both deliberately vulgar and sharply incisive, Kolkata based director Q is sure to turn heads with Gandu - a film that straddles a heretofore unnoticed line between Danny Boyle's Trainspotting and Gaspar Noe's Enter The Void. If nothing else Gandu makes on thing very, very clear: should he have the inclination and backing to do so Q could very easily become India's answer to Gaspar Noe..
A potent piece of work that announces Q as a significant talent on the world stage the sad truth is that Gandu is such a niche piece of work that it will almost certainly never receive any sort of commercial release on any format. For proof of this, go to your local video store and count how many contemporary films shot in black and white they stock. Then see what percentage of those are foreign. And if they stock any Indian film at all, what percentage of those are non-Bollywood. You get my point. All the more reason, then, to get out and see / support this while you have the chance."

Artsploitation's DVD release is very good, porting over all the extras from BIldstorung's German Blu-ray release and adding a great booklet with an exclusive conversation with Q. While I wish this was on Blu-ray, I can see the challenges inherent in releasing such an out-there title in HD for a new company. Definitely worth your time and money. 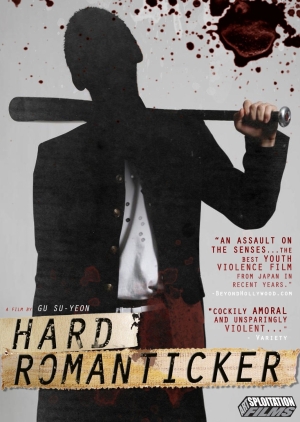 The second title is the Japanese anarchic action piece, Hard Romanticker, directed by Gu Su-yeon, based on his novel of the same name. Comparisons to A Clockwork Orange are apt, as the violence level does reach "ultra" from time to time, however, I think it is in the film's quieter moments that it works best. Here's a piece of our review from Japan Cuts 2012:
"Rather than making a broad social commentary about jingoistic society where a country doesn't recognize its dark past and the consequences, Gu's view is limited to a very personal storytelling that, at times can be viewed as nihilistic fantasy. Maybe it's possible that the world of Zainichi is completely separate from the rest of the 'normal' Japan (as indicated in a comical sequence where street gangs are asking around in every nooks and crannies of Shimonoseki, "Have you seen Gu?" and someone responds, "What is a Gu?"). Hard Romanticker also has that distinctive 70s feel, including rampant misogyny and violence against women. The cellphones and video games are the only visible evidence that it takes place in current times. Endlessly entertaining, Hard Romanticker is a fast paced, visceral gangster film with plenty of hard-knuckle fight scenes that will surely garner cult-status in the near future."
The DVD is sadly bare bones apart from a trailer, but does feature another booklet (hooray!) with a pair of fantastic essays from Artsploitation head honcho Travis Crawford and film commentator Patrick Macias. 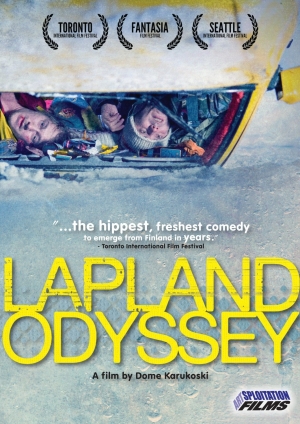 The third in the trio is recent Finnish road comedy, Lapland Odyssey. I had no idea what to expect from this film, but within the first ten minutes I was completely won over. A boy loves a girl and that girl tires of his childish bullshit, so she gives him an ultimatum: get a digibox (TV cable box) before 9AM or she's out of there. It's already late at night, so the aforementioned boy goes on an epic journey across the Finnish countryside in search of the one thing he believes will right all his wrongs. Of course it's not that easy, but we've all been there.  Here's a piece of our review from Cinefest 2011:

"Lapland follows Janne, a 20 something unemployed slacker wallowing in listless self pity. His two friends are equally broke and pathetic. One has been crippled by an over domineering mother while the other is burdened with a familial history of suicide. Janne's girlfriend is fed up with his inability to take responsibility. When he spends her hard earned money on beer with his buds rather than buying a cable box so that the two can watch Titanic together, she gives him an ultimatum  to find a way to acquire said device before the morning or she'll be gone. This is not as easy as it sounds, there's only one electronic shop in Lapland and it's already closed not to reopen until after the weekend. In order to find a digibox, Janne will have to raise the necessary funds and journey 200 kilometers to the closest city. Like Harold & Kumar Go To White Castle, this trio of wino louses find themselves in one crazy and surreal scenario after another. The breakneck pacing moves the film along quickly and painlessly. Apart from Troll Hunter, Lapland was one of the few films so far in this festival that I sat through entirely without any watch checks."

Lapland Odyssey comes to DVD with a short film by director Dome Karukoski and another fantastic booklet. I really enjoy reading about films in short bursts, and I hope Artsploitation keeps up the booklet habit.

With so much more on their plate, Artsploitation is doing distribution right. They aren't gobbling up tiny films and hoarding them, they are acquiring good films and releasing them with care. Their upcoming theatrical releases of Vanishing Waves and Clip look really stunning, and the rest of the films in their kitty look pretty amazing as well. These are the kinds of companies that need our support, and I encourage you to drop a few bucks to ensure they can keep film fans happy!