Exclusive! Artsploitation Bringing LAPLAND ODYSSEY To The US On January 8 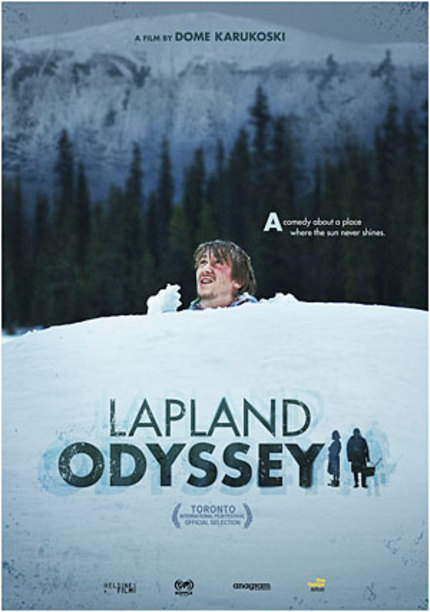 Hot on the heels of their acquisitions of the past two months, upstart indie distributor Artsploitation Films is at it again, this time announcing their sophomore home video release with Finnish comedy Lapland Odyssey. This isn't one I've seen, however, we have a pair of fair to positive reviews in the archive that you can check out via the links below.

[Lapland Odyssey] is a beautiful film. Nearly every meticulously composed shot could be removed and framed on a wall. I can't think of a single American comedy featuring noteworthy or even noticeably crafted camerawork that's comparable. Generally speaking, slapstick buddy comedies are little more than medium reaction shots. The lush color palette and attention to lighting sets Odyssey far apart from the pack.

Sounds good to me! Here's the official word from Artsploitation:

Available January 8 on DVD and VOD

Directed by Finland's Dome Karukoski, this award-winning comedy was hailed by the Toronto International Film Festival as "...the hippest, freshest comedy to emerge from Finland in years."

On January 8, Artsploitation Films will release LAPLAND ODYSSEY on DVD. The same day, the film will be available for download from online digital retailers. It will also be offered in High Definition Video on Demand (VOD) and Standard Definition VOD from various providers.

Set in the frozen landscape of northern Finland, LAPLAND ODYSSEY follows a raucous road trip that begins when slacker Janne is sent out into the night by his beautiful and frustrated girlfriend Inari to purchase a cable box for their home. But the quest is not as simple as it sounds. Janne, accompanied by his two hapless and troublemaking friends, is propelled along a bizarre journey filled with such obstacles as naked, gun-toting Russians, some very hostile reindeer, a Jacuzzi of bikini-clad beauties, barroom brawls, Inari's creepy ex-boyfriend, and much more. Meanwhile, the police are in pursuit of the three friends at every turn. Unfolding at a breakneck pace, this winningly wacky comedy was the biggest hit of the year in its home country and a film festival favorite.

Heralding the arrival of LAPLAND ODYSSEY on January 8, Artsploitation Films will ship its first release, GANDU, on December 18 (*Please note this is the new street date, moved from December 11). Directed by Bengali filmmaker "Q" (Kaushik Mukherjee), this independent Indian film is a deliriously frantic, music-infused look at one poor young man and his dreams of becoming a rap star. GANDU (Hindi slang for "asshole") is a bold and entertaining example of new Indian filmmaking that, ironically, is banned in India. It will be available on DVD and VOD.

As noted above, Artsploitation has informed us that their home video premiere of Q's Gandu has been pushed back a week to December 18. We've also seen a release date of January 22 for their DVD of Hard Romanticker, which I know has been very eagerly awaited by ScreenAnarchy readers. Keep your dial locked on ScreenAnarchy for more news!