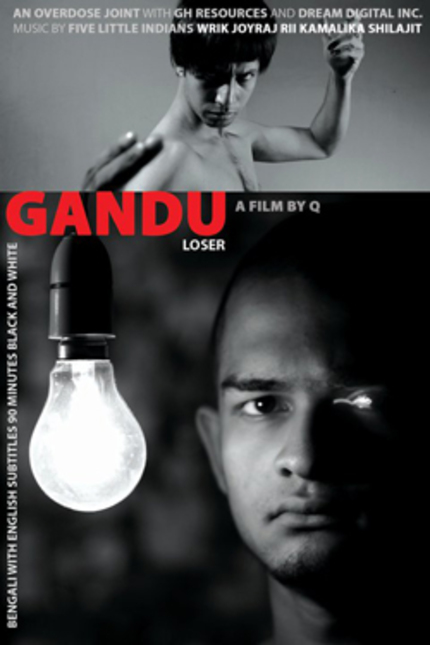 The London Indian Film Festival opens on June 20th, and among their programming coups is Q's festival smash, Gandu. Along with screening the film, the LIFF will be hosting the Gandu Circus, a live musical performance featuring Q and members of Five Little Indians, The Asian Dub Foundation, and more. In honor of the screening, we are republishing my review from SAIFF 2010, enjoy!

For a country with one billion residents, it is sort of strange that the cinematic culture of India seems so homogeneous to the outside world.  Bright and colorful musicals dominate the international community's view of Indian cinema.  For the most part, they are right to think that way, however, this is largely a function of many political factors and censorship laws.  I mentioned in a previous news article that the Indian censor board is very strict, and that there are really only three ratings that will garner cinema hall showings in the country. First there is the "U", or unrestricted rating (equivalent to G or PG ratings in the US), "U/A", which is like the PG-13 rating, and the much more restrictive "A", or adult rating which is equivalent to R, NC-17, etc...

Q's Gandu would not fit any of these ratings.  Gandu is graphic and loud.  Gandu feels real, which is not a characteristic of many big Indian films.  It is a very intense and kinetic story.  There are times in the film when it feels as though style takes precedence over substance, but it all comes together in the end.  The style is the substance, each editorial decision is made to provide further context for the actions in the film.  If something appears to be random, I assure you, it is not, it perhaps hasn't drilled its way through your brain yet.  I'm certainly not ashamed to say that it has taken me several days to begin processing this film, and I still don't think I am completely through with it.

It isn't a story of gangsters or criminals like Slumdog Millionaire, or any of the litany of "kids gone bad" films we have seen.  In fact, the characters in this film wouldn't even be given any lines in a typical, or even an atypical Indian studio film.  These are real people, poor people, desperate people; people living lives completely within themselves and apart from their surroundings.   Gandu, the title character, is one of these people.  He spends his days following a routine: breakfast with Mom, wait for Mom and her boyfriend to get down to business and steal from boyfriend's wallet, use proceeds to gamble daily, visit Internet cafe; lather, rinse, repeat.  However, beneath the facade of routine, Gandu seethes.

The only place where Gandu feels like a success is in his own words.  He is a rapper, and a good one at that.  In fact, the only words we hear from his mouth for the first third of the film are his rhymes as he will break into a scene with bombastic lyrics set to guitar and bass-fuzz driven beats.  Gandu has no need to talk to the people around him, we can tell through his poetry that he sees no need for them, and despises most of them.  We, the audience, see what Gandu is capable of, but no one else in the film does.  He lives within his own mind, and he feels very little impetus to move outside of that small place, because he looks around and sees that success is not something that happens to people in his world.

This all begins to change when he finds a friend in a Bruce Lee worshiping rickshaw driver, whom Gandu appropriately refers to as "Rickshaw-walla", "walla" being the Indian suffix for any position of manual labor.  "Walla" at the end of someones name not only denotes what they do, it kind of denotes caste, in a country where caste still plays some part.  Gandu doesn't even have a caste, though we can assume through his motivations that he is looking to rise.  As Gandu and Rickshaw-walla ricochet between fantasy and reality, Gandu starts to realize that he is what stands in his way, and he needs an epiphany.  Soon enough, the gods take pity and his daily lottery pays off, which sends Gandu on a journey of self-realization.

This is where the film bursts from its conventions and starts to really shine.  At the suggestion of his friend, and following the ingestion of some potent drugs, Gandu surges out to seize his day.  This leads to a remarkably colorful, sensual, sleazy, gritty, and real encounter with a woman, a prostitute perhaps, which helps Gandu find his groove.   The sex scene is extended and graphic and is probably meant as much to challenge the viewer as it is to push the story forward.  No punches are pulled, and nothing is hidden.  Following this encounter all of Gandu's fantasies begin to coalesce and turn, bit by bit, to reality.  The style changes, in fact, a whole new set of opening credits appears halfway through the film, marking the division.  This is very daring stuff.

One of the great stylistic tools used by Q in creating Gandu was the decision to shoot in black and white.  More than just an aesthetic choice, his vision allows the viewer to experience this film and its characters free from prejudice.  India is a very colorful country, even in its poorest parts, and allowing those colors to intrude onto what is a very personal story would have lessened its impact.  The choice to remove color from the equation is critical in getting Q's film to work.   We have to see these characters in their own world, how they see it, and to me, it doesn't seem all that colorful.  The editing of the film is really very jarring most of the time, but in a very effective way.  The film cuts back and forth across characters, often with no regard for story or plot, but that really isn't what the film is about.  We feel off-kilter, just like Gandu, his world is small and he tries to make it bigger.

This could be seen as a metaphor for how Q feels about Indian cinema.  Making a film like this in a country like India takes balls.  Certainly Q understood that the film would most likely never get public release, but this was his film, the film he had to make.  This film is almost like a political statement, a revolution in South Asian film.  Everything that mainstream South Asian film is, Gandu is not.  It is not colorful, it is not polite, it is not fantastical, it is not modest in any way.  The film has its faults, but even those can plausibly be chalked up to stylistic choices.

Todd said in his review that Gandu is the kind of film that is unlikely to see any kind of wide release, and he is right.  It certainly won't see release in India, and even its value on the art film market is limited by a number of factors.  None of these likelihoods make it any less worthy of viewing.  If you are in the area, definitely check this one out, it will give you a new perspective on what Indian film is capable of.  This kind of boundary pushing work deserves support, if for no other reason that to support the free speech and clarity of artistic vision that some people still have to leave their homelands to exhibit.

I think this could be the birth of a new and different voice in international cinema.  We are seeing it here in its infancy, but it shows great potential.  The sad thing is that if it isn't nurtured, it may not survive, films like this need a home outside of India before they can be accepted inside.  The word "transgressive" has been tossed around a lot in the last couple of years when it comes to films, but no film I've seen recently deserves that title more than Gandu.