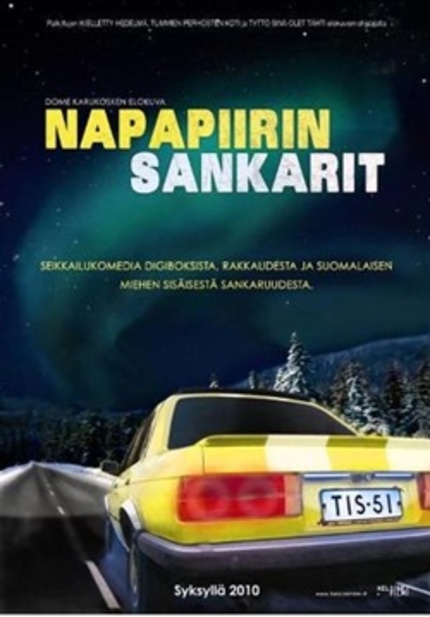 [Our thanks to Brandon Tenold for the following review.]

With Lapland Odyssey director Dome Karukoski makes an admirable attempt to offer up a Finnish take on the vaunted road trip comedy genre, and for the most part he succeeds, with almost every part of the film, from the characters to the setting and situations all working quite well, even if they ultimately don't add up to anything truly special.

The movie gets off to a promising start with a darkly comic bit about a dead pine tree in Finland's northern Lapland province that several generations of men have used to hang themselves when life gets to be too much for them, whether it's because of Nazi's burning down their village or Finland losing to Sweden in hockey.  The focus then shifts to unemployed slacker Janne (Jussi Vatanen), who's living on welfare while his girlfriend Inari (Pamela Tola) works.  Inari gives Janne some money to pick up a "digibox" (digital cable box) so they can watch Titanic that night.  However, even this simple task proves to be too much for Janne, as he sleeps in and then proceeds to spend some of the money Inari gave him on beer.  Fed up with his layabout ways, Inari gives Janne an ultimatum: either he gets her a digibox by 9 AM the next morning, or she's leaving him.  Left with little other choice, Janne decides to travel 200 km to the nearest city to get one, bringing his equally lazy friends Kapu (Jasper Paakkonen) and Tapio (Timo Lavikainen) along for the ride to help him scrounge up the money needed.  Along the way, they encounter such obstacles as a lesbian underwater rugby team, some paintball loving Russian tourists and Inari's jealous ex-boyfriend, not to mention more mundane things like car troubles, harsh weather and run-ins with the police.

Comedy typically does not travel that well, both due to the humor of the actor's delivery being lost in translation and the subtleties of a nation's culture playing a part in some of the jokes, but Lapland Odyssey does have some appeal for people outside of Finland.  Although it does contain some unique Finnish touches such as sauna's, gaudy knitted sweaters and one scene involving a very unfortunate reindeer, for the most part the film's story of a bunch of booze-loving slackers going on a road trip is quite palatable to people on this side of the Atlantic.

As with a lot of "road trip" style films, Lapland Odyssey can be quite episodic at times, with the protagonists lurching between one wacky situation after another on their quest.  It also raises a question common to many comedies that have a slovenly loser as the main character; namely what is a girl like Inari doing with someone like Janne in the first place?   Although he redeems himself in the end, it's hard to believe a sweet, attractive woman like Inari would put up with a guy like Janne for so long.  Despite this, the film avoids the mistake of making Janne and his friends completely unlikeable, and I did find myself rooting for them to succeed.  It must be said that the photography is exceptionally strong as well, with the Lapland setting seeming both beautiful and a bit depressing, with its lush forests and flickering northern lights contrasting with the pervasive darkness and cold.

While it won't be joining the ranks of my favorite comedies anytime soon, Lapland Odyssey is a (mostly) light, amusing, briskly paced Scandinavian take on the road trip comedy.   You probably won't remember much beyond a few sequences after the movie is over, but it's a pleasant enough experience while it lasts.