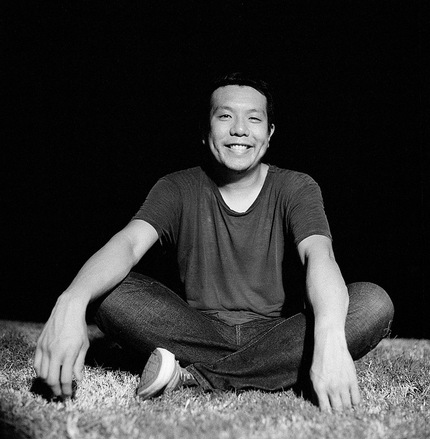 Last month, we premiered the first poster for Yen Tan's Pit Stop, which is is having its world premiere at Sundance today. Yesterday, our fearless leader, Todd Brown, posted the first clip for the film. To complete this trifecta of awesome, I interviewed Tan to give you, our precious readers, more insight on his film.
Pit Stop was co-written by David Lowery (his movie Ain't Them Bodies Saints is also playing at Sundance). Yen is a visionary and I encourage you to watch his film if you are in Park City. Enjoy six quick and dirty questions for Yen.

The film centers around broken romance and the hope of finding a connection with someone. What about these themes do you find fascinating?
I find these themes fascinating because they're immediately identifiable and reveal so much of our vulnerabilities and our capacity in finding and experiencing love. The need to connect with others, romantic or not, is such an essential part of our humanity. These are ingredients that pave the way for great drama and characters.

Some of the characters meet online, looking for real romance or a one night stand. Where do you stand on searching for love online versus letting it happen organically, "when you least expect it?"

I certainly prefer the romanticized notion of finding love when it's least expected, but the reality is that most of us have to resort to the web because it's just too difficult otherwise. Meeting people online also has its own challenges. I'm sure that for a lot of people, it's still really hard to find "the one." Which is why when it happens in the film, the feeling is so elating and wonderful, we remain hopeful that we'll get to experience it ourselves.

During the duration of the movie, the pit stop where some of the characters meet becomes a character itself. Why do you think it was important for them to meet there for the first time, versus at a bar or the usual social setting we're used to seeing and meeting people at?

Bear in mind we're also talking about gays trying to meet each other in a small town setting. I doubt that these encounters can take place in conventional social outlets. That was one of the things that came up when I spoke to small town gays: if they met online and wish to see each other in person after, finding a meeting spot is very common. It could be a gas station or a coffee shop. It's a means to meet safely in public, yet it maintains a sense of anonymity.

What's the hardest part of shooting a feature film with almost no budget?

The fear of running out of money is always lurking around the corner. It's the kind of anxiety that could mess with your confidence if you're not having a good day.

After the film ends, what do you hope people take away from it?

I'd like people to be moved in a way that is hopeful and enlightening.

There are a lot of Texas filmmakers and actors with films at Sundance this year. What do you think that's saying about the film community in the Lone Star State?

It's about time! Most of us have worked very hard for very long, so this is a tremendous validation. But this also means that the bar is set higher, and making another film is still gonna be as challenging as before. The uphill battle continues!

Pit Stop will have its world premiere today at Sundance, and you can get tickets and times HERE.
Sign-In to Vote
Tweet Post Submit