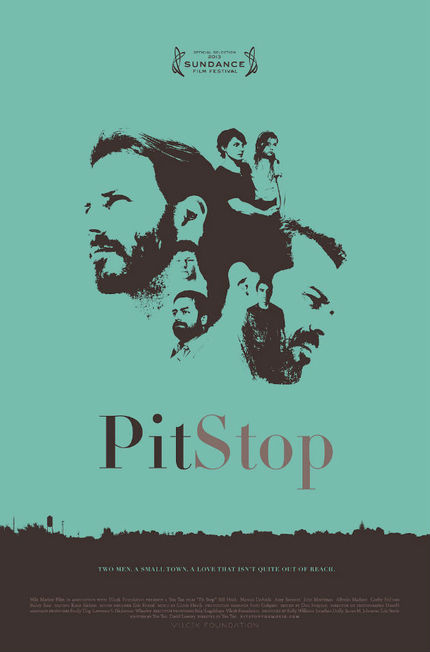 Soon to premiere at the Sundance Film Festival, Yen Tan's Pit Stop has its first poster, designed by the filmmaker himself, and we're pleased to present its debut.

Pit Stop is the third feature film from Tan, who I first met when I was volunteering at the Asian Film Festival of Dallas in 2002. He's an incredibly talented filmmaker and graphic designer, down-to-earth and modest, yet determined to stay the course and make personal films that resonate widely. Here's the description of Pit Stop from the Sundance film guide:


Recovering from an ill-fated affair with a married man, Gabe finds solace in the relationship he maintains with his ex-wife and daughter. On the other side of town, Ernesto evades life at home with his current live-in ex-boyfriend by spending much of his spare time in the hospital with an ailing past love. Impervious to the monotony of their blue-collar world, they maintain an unwavering yearning for romance.

Far from the gay centers of the world, director Yen Tan explores the complex and oft-forgotten lives of gay men in small-town America. The understated, contemplative nature of Ernesto and Gabe's story is told from the perspective of an observer, allowing us--even if just for a moment--to understand what it means to be an outsider. The emotional isolation the two men have grown accustomed to is captured in a subtle, optimistic, poetic fashion while avoiding melodrama. In a refreshingly quiet film, Tan's protagonists never try to run away from their relatively hollow surroundings, but opt to fill life's deepest voids with their tenacious confidence.

Tan directed, and co-wrote the script with David Lowery (who also has his feature film Ain't Them Bodies Saints premiering at the festival). The cast includes Bill Heck, Marcus DeAnda, John Merriman, and Amy Seimetz (Sun Don't Shine). Pit Stop will screen at Sundance on the following dates: